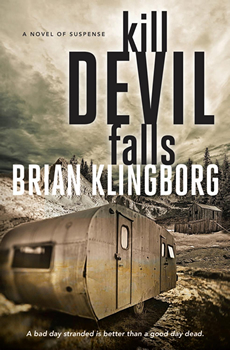 Brian Klingborg comes to this first novel with screenwriting and publishing credentials. Even reading about KILL DEVIL FALLS, I’m impressed with the fantastic setting for a rural noir, as well as the irresistible title. This premier book is prime for screen treatment.

And as a former teacher of writing, I must say, any writer could learn a lot from Klingborg’s take on dialogue, and the discipline it takes to get a book written.

In this interview with The Big Thrill, Klingborg shares some of that expertise and provides insight into his debut, KILL DEVIL FALLS.

KILL DEVIL FALLS is about a U.S. Marshal, Helen Morrissey, who travels to a remote, and nearly abandoned mining town high in the Sierra Nevada mountains to collect a fugitive.  Soon after she arrives, her car is sabotaged and the fugitive is murdered.  Now she’s trapped in this godforsaken place, surrounded by a handful of menacing oddballs and outcasts, while she tries to figure out who the killer or killers are, and why the murder was committed.

The title of KILL DEVIL FALLS has three words which give a frightening connotation.  Can you tell us why you chose that place and title?  Is this a real place or one you created?  Do you utilize “setting as character?”

To answer the last part of the question first, KILL DEVIL FALLS is very much a central character in the story.  It is a dangerous and insalubrious place—the soil it rests upon is contaminated by toxic levels of mercury from decades of gold mining and it is riddled underground with abandoned tunnels. Helen eventually becomes convinced the town itself wields a malevolent sway over its inhabitants.

Naturally, I wanted to name the town something that was ominous and foreboding.  So, I conducted an extensive search of locations with unusual and creepy names and blended bits and pieces together to come up with Kill Devil Falls. The town is a fabrication, but if it existed, it would be in the vicinity of Haskell Peak in California.

I originally wrote this story as a screenplay, and in all honesty, my goal was to create something that wouldn’t cost an arm and a leg to produce—therefore, I limited it to a cast of only a few characters and a couple of settings.  From there it was a short leap to a remote location in the mountains.  Also, I was born and raised in the San Joaquin Valley, so I know the general terrain, the towns and highways, and something of the local color.

Your main character. U.S. Marshall Helen Morrissey, is obviously a woman and therefore not the usual U.S. Marshall most readers would expect.  Why did you choose a woman as your protagonist for this story?

I wanted to create an atmosphere of dread, vulnerability, and claustrophobia.  Having a female protagonist seemed the best way to accomplish this.

At the same time, I was hoping to avoid the usual cliché—a tough, masculine cop who rides into town and puts things right through a combination of brains and brawn.  In the case of KILL DEVIL FALLS, Helen has chosen a career that is dominated by men with an aggressive, alpha-male mindset. This gives us an indication of her personality and interior struggle, and creates a context for how she reacts to the people and situations she encounters.

Lastly, I have two daughters, so I am all about strong, clever, and resourceful female protagonists.

A review mentions that the book “Kept me on the edge until the last page.  I raced through it.” What techniques do you use in KILL DEVIL FALLS to keep up the pacing and the suspense?

I followed a three-act structure similar to that of a screenplay, and slowly ratcheted up the tension and conflict as I moved along.  I also attempted to end each chapter on a bit of a cliffhanger.

You mentioned that you worked very hard on the police and marshal “procedural details.”  Besides reading researching, did you interview people with those careers or find a way to observe in real life?

When it comes to procedural details, I have a secret weapon.  His name is Chris Alexander and he’s a good friend, an excellent writer, and a 20-year veteran of the NYPD where he worked patrol, narcotics and, for many years, as a detective. Whenever I need to know how a cop might track down a fugitive, process a crime scene, or just bust someone’s chops in the precinct house, I call Chris.

You cite your admiration for “Elmore Leonard’s deconstructionist approach” to writing dialogue.  Can you explain this and why you think this works so well for what you call your “rustic noir?”

Elmore Leonard came up with a list of ten rules of writing, which are absolutely brilliant.  Rule #3: “Never use a verb other than ‘said’ to carry dialogue.”

Crafting dialogue is like writing a text message—mood and sarcasm are difficult to convey without relying on emojis or something similar.  The natural impulse is to include an array of verbs and adverbs designed to communicate the speaker’s intent.  But this a slippery slope.  Before you know it, you are using words like “chortled” and “exclaimed,” which sound forced and unnatural.  As Leonard said, let the character and his/her actions do the talking.

My goal in writing dialogue is to lend each character a unique voice, but at the same time, to keep it as close to what a real person would say as possible.  Of course, you have to delete the “ums” and “you knows” and keep things moving along, but where I grew up, grammar was optional and to speak in an overly exacting manner was considered persnickety.  This was my guiding principle when writing dialogue for KILL DEVIL FALLS.  I think it works well for rustic noir because it adds a touch of color and realism—it just wouldn’t make sense for these characters to speak like a Harvard professor of linguistics.

You state that your story probes “the banality of evil in small U.S. towns.”  I live near a small town where a disgruntled man recently stormed into a nursing care facility and shot to death his former girlfriend, another nurse and the county sheriff who responded to the 911 call. Is this the sort of violence and irrational evil you are referring to?  Can you explain more—and perhaps how you used this in KILL DEVIL FALLS?  And is small town/rural evil more shocking than that in urban settings?

To some extent, yes, but growing up in a small agricultural community, I was struck early on by the duality of human nature.  The people of my town were hard-working farmers, dairymen, and so on, and they could be generous, kind-hearted, and principled.  And yet, there was also a strong undercurrent of potential violence, casual racism, and xenophobia.

There is an American ideal that portrays small town folks as “salt of the earth” types who represent “traditional” values.  But Mayberry, USA, is a myth.  In any community, urban or rural, you will encounter decency and immorality, sometimes in the very same person, depending on your perspective. Are you an insider looking out, or an outsider looking in?

I think the portrayal of crime and murder in a small town can have a greater shock value than in an urban setting where it is, to a degree, expected. But certainly, random cruelty and senseless violence are not solely an urban phenomenon.   So, while my central goal in setting KILL DEVIL FALLS in an isolated, rural spot was to keep things simple and claustrophobic, I also wanted to reference some of the realities I experienced growing up and subvert the American myth of small town folksy wholesomeness.

Your position as a publisher, your career and, no doubt, “real life” must make demands on your time.  Since this is your first novel, can you give readers and other beginning authors any advice on the discipline it took to write this first novel?  Was it a struggle or did it come easily?

Writing, for me, is difficult and time consuming.  And for many years, I was unwilling to invest the time and effort into something which had so little likelihood of success.  But eventually some internal switch flipped, and I decided rather than regretting what might have been, I’d give it a shot. So, I’d say the first rule of writing is that you have to be motivated to do it even though there is no guarantee your work will ever get published, or if it does get published, will make you a single, solitary dime.

The second rule is the old adage “apply the seat of the pants to the seat of the chair.”  I’ve heard a lot of people talk about how they want to write this or that, but I see very few people actually doing it.  Stop talking, and start writing.  Don’t worry if it’s good or bad.  And don’t make the mistake of expecting every sentence to be perfectly crafted before you move on to the next.  It is better to get all your ideas out onto paper as quickly as possible, and then begin the long process of rewriting, and rewriting, and rewriting some more.  Often you will get to know your characters only through the process of writing, and no matter how meticulously you outline your plot, ideas will occur to you and changes will be made as you go along.

Lastly, if you want to be a writer, be professional about it.  Read a lot of stuff, and see what works and what doesn’t.  Listen to criticism, and change accordingly.  Learn to handle rejection without wanting to curl up into a little ball and die.  Or, at least, curl up for a week or so, and then climb back into your chair.  Be organized and keep to a schedule.  If you can only write 200 words a day, okay.  In a week, you’ll have a thousand or so.  Keep on truckin’.  Be the tortoise.  It’s an ultramarathon, not a 40-yard dash. 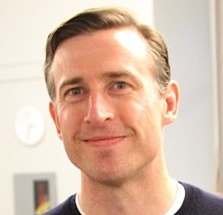 Brian Klingborg has lived and worked in Asia, Europe and the USA. He has written for television and magazines, and published two non-fiction books on Chinese martial arts. He lives in New York City. Kill Devil Falls is his first novel.