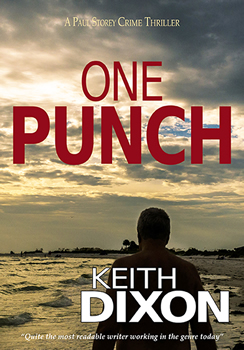 Storey takes the job but soon finds himself involved in more than driving. There’s a murder. And conspiracy. And another murder.

And then the real trouble starts.

ONE PUNCH continues the series begun by Storey, described by one reviewer as a “highly intelligent, witty and well-plotted thriller”, and by others as “very entertaining”, “a great read” and “an unusual thriller.”

If you like thrillers with surprising characters, intricate plots, lots of humor and exciting action, then ONE PUNCH should fit the bill.

Author Keith Dixon sat down with The Big Thrill to discuss his novel, ONE PUNCH:

Above all I want readers to be entertained as they read this book. To me this means not just enjoying the outcome of the plot, but the journey they take to get there.

I learned that it’s possible to maintain tension without having a lot of conventional ‘action’—the tension can arise because you empathize with a character and don’t want them to come to harm. It’s not necessary to constantly put them in danger in order to garner empathy.

The Paul Storey series is particularly influenced by the writing of Elmore Leonard, particularly his ability to tell a story swiftly and succinctly, getting into the heads of all of his characters—both the good guys and the villains.

Keith Dixon was born in Yorkshire and grew up in the Midlands. He’s been writing since he was 13 years old in a number of different genres: thriller, espionage, science fiction, literary.

He’s the author of seven novels in the Sam Dyke Investigation series and two other non-crime works, as well as two collections of blog posts on the craft of writing.

He’s currently spending more time in France than is probably good for him.