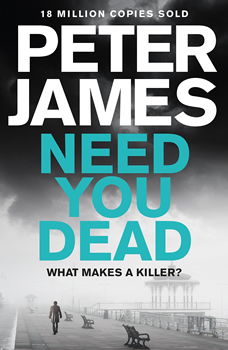 When bestselling novelist Peter James started work on what was to become his 13th Roy Grace novel, NEED YOU DEAD, he knew he had to up the ante—for himself, his protagonist, and the reader.

But inspiration came from an unexpected and unpleasant place: frightening audio of a domestic brawl that escalates to murder.

“I always try to raise the bar with every book,” James said. “Three years ago I listened to a 911 call made to the LAPD by a woman whose estranged, violent husband was trying to break into the family home. The call started quietly, the woman clearly afraid, saying she had locked herself in her bedroom and her husband was trying to break into her house.  Before the call handler had dispatched a police car to the scene, she began screaming that the man was now in the house.  Then we could hear hammering sounds, and the woman now crying, stammering that he was trying to break the door down. Her voice turned to utter stark terror as he succeeded. We then heard five gunshots. He had shot her dead.”

The deadly call lingered with James, and spurred him to craft the story behind what he’d listened to, as a form of creative catharsis.

“The sheer horror of it remained with me for many months afterwards, and still does today,” James said. “I became fascinated by what the backstory might have been.”

The journey lead James to NEED YOU DEAD, and a character named Lorna Belling.

“Lorna is a hairdresser who works from home, is desperate to escape her marriage from her abusive husband, Corin,” James said. “ Eighteen months ago she began an affair with a charismatic lover, Greg, and they have a secret love nest, a tiny flat on the seafront in Brighton.  For over a year now Greg, who is married, has been promising Lorna that he will leave his wife, Belinda, and their apparently loveless marriage and make a new life with Lorna, taking her away from her vile husband. But Greg is constantly coming up with one excuse after another as to why it is not the right moment to end his marriage.  Finally, he tells Lorna he is going on holiday to the Maldives with his wife, who is recovering from a family bereavement, and is going to break the news to her there.”

But Lorna soon discovers Greg’s plans weren’t real—and there might be much more to him that she doesn’t know, starting with his very identity.

“A few weeks later Lorna is cutting a female client’s hair, and the woman is excitedly telling her about her holiday in the Maldives,” James said. “ She shows Lorna some pictures on her phone, and Lorna is astonished to see a very loved-up couple in the bar with her client and her client’s husband. The man, for sure is Greg.  Except as her client tells her, his name is something quite different. And his wife is not called Belinda at all.  Finding out that “Greg” has lied to her consistently for eighteen months, about who he is, what he does, she flies into a fury.  And she decides when “Greg” comes to their next assignment, at their flat, later that day, she is going to confront him, and threaten to ruin this love rat’s life.”

But when Lorna’s body is discovered the following day, James’s beloved detective, Roy Grace, enters the picture—and the mystery might not be as much of a slam dunk as you’d think on first glance.

“At first it looks an open and shut case with a clear prime suspect,” James said. “Then other scenarios begin to present themselves, each of them tantalizingly plausible, until, in a sudden turn of events, and to his utter disbelief, the case turns more sinister than Grace could ever have imagined.  There is an expression in the homicide world that Grace often uses to his colleagues. Think the unthinkable.  Now for perhaps the first time in his career, he is finding that he himself has to think this very same thing.”

The novel once again drags Grace down into the deepest corners of human depravity, which is just where James thinks the character shines.

“I love the deeply human aspects of this man.  During his work he sees the most terrible sights imaginable yet he retains a calm, gentle humanity,” James said. “This aspect is one of the key characteristics of almost every homicide detective I have met:  They are calm, kind and very caring people.  In very many cases they develop a close relationship with the victim’s loved ones, and solving the crime becomes personal to them.  It is the reason why so often, even years after they have left the force, that many detectives still continue to work away on any case they could not solve during their career. I always jokingly say that if I was ever unfortunate enough to have one of my family murdered, Roy Grace is the one I’d like in charge of my case.”

A seasoned veteran of the novel-writing game, James sticks to a process and habits that have served him well since his earliest days writing Grace books, and one that includes a nice beverage to get the ideas kickstarted.

“My whole writing day is back to front…  It is from the time when I was writing novels whilst working full time in film and television as a screenwriter and producer, so I had to make my ‘Me time’ to write,” James said. “My writing day starts at 6pm in the evening, when I mix a large vodka martini, with four olives, put on some music, light up a cigar and get into a zone. I try to ensure that whatever I’m doing I leave myself time to write 1000 words 6 days a week.”

“Writing is a craft, and any craft is improved with practice,” James said. “ But most importantly is to read the most successful of the kind of works you would yourself like to write:  So if you want to be, for instance, a crime thriller writer, read the blockbusters of the past fifty years.  Analyze them, literally deconstruct them and try to figure out what made them so popular.  This is what I did when I started out.  I took the books I most admired, the ones I most wished I had written, and literally read them until I knew them inside out.” 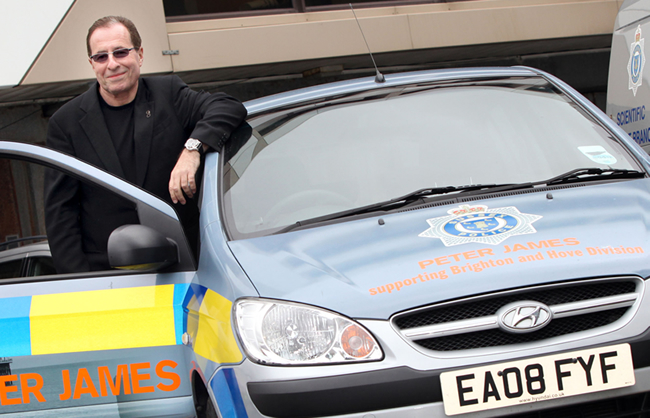 James, a diligent and immersive researcher, points to pacing as the biggest challenge he—and most thriller writers—face when diving into a new novel, and throughout the creation process.

“It’s a real challenge because police work is laborious and slow,” James said. “Whilst I want to reflect that accurately, I never want it to slow the tempo.

With all my books I create a basic plot structure which includes the high points of the drama and the ending as I always know the ending that I want to get to, within this I plot the first 20% of the book in considerable detail. But what I find in the first 100 pages is that the characters start to take on a life of their own, I know the principal character arcs that I want to happen but as I get more into the book I often find that the story becomes driven more by the characters than by the plot itself. I am a great believer in a balance between spontaneity and structure. By this I mean that whilst adhering to the basic framework, I think it is very important as a writer that I constantly surprise myself, because if I didn’t surprise myself then I wouldn’t be surprising my readers.”

And while NEED YOU DEAD completes the baker’s dozen for Roy Grace books, James is clear in describing the novel: it is important to the detective’s ongoing story, and it adds heavily to his expanding mythos.

“This book is very much a modern take on the traditional idea of the whodunnit with a number of suspects and a very dark twist, but written as a thriller rather than a police procedural,” James said. “It has major new character developments, and the start of a new chapter in the central character, Detective Superintendent Roy Grace’s life.  The story is very forward looking.  Police and villains play a constant game of ’catch up’ with each other.  Normally the villains making the running with new technology—in this book the internet fraud aspects of cybercrime, which drives the narrative.”

Peter James is an international bestselling thriller writer. He is a New York Times bestseller, as well as having 11 consecutive Sunday Times No 1s, and he is published in 37 languages. His DS Roy Grace crime novels have sold 18 million copies worldwide. Prior to becoming a full-time author, he was responsible for 25 movies. In 1994 Penguin published his novel, ‘Host’, on two floppy discs as the world’s first electronic novel. He is Overseas Vice-President of International Thriller Writers in the U.S. His novels have won numerous awards, most recently the coveted 2016 CWA Diamond Dagger for sustained excellence, and he was publicly voted by WH Smith—Britain’s biggest book selling chain—The Best Crime Author Of All Time.