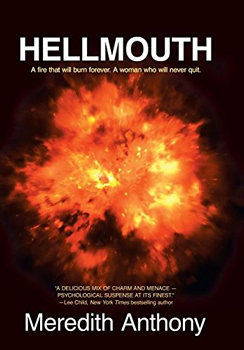 But don’t just take our word for it. Check out this interview in The Big Thrill, in which I ask Meredith Anthony a few questions about her new thriller, HELLMOUTH.

Your lead character, Helen Goode is not a typical thriller hero. How did you decide what physical, intellectual, and emotional characteristics she should have?

So many thrillers are male dominated and the hero is usually handsome, tall, strong. All that.  If it is woman-centered, she’s always young, blonde, blue-eyed, gorgeous, slim—usually has martial arts skills or is a cop or ex-cop.  I wanted the least likely protagonist.  A slightly dumpy middle-aged woman with a sedentary life and no physical skills.  None.

Which comes first in importance for you? Plot? Or Character?

Definitely character. After you build a complicated person, a plot will amble up and climb in their car.

I love unconventional heroines. What I loved about Girl on a Train is that the crime is solved by a disorganized, unhappy, black-out drunk. That kills me.  I love the unexpected. Look at Denise Mina’s Paddy Meehan series. Same thing. It’s like Bridget Jones with murders.

BAM!—Less than five pages in there’s a big wow. What made you decide to put a major surprise in the first few pages?

I like to begin with normal and then let things go wrong. And I wanted to show off Helen’s special skills—her disarming charm and wicked intelligence.

Jefferey Deaver. His hero is a paraplegic.  Mine is just as unlikely to prevail.

What thriller writers inspire you?

What genre is HELLMOUTH?

This is a tough issue. I went through three major agents and a couple of editors—all of whom claimed they loved it, but couldn’t sell it since it didn’t fit in a category.  I actually had one publisher tell me: “There’s too much violence, too much sex, and too much humor.” One major publisher wanted me to tone it all down and make it a cozy series. That just wasn’t what I was going for. I think it’s noir with a dash of fun. Or domestic suspense with a dark edge.

Do you have any favorite scenes?

There are two scenes I love.

The scene where Helen goes to talk to the town doctor/medical examiner who is also a murder suspect. She ends up in an examining room and he’s opened a drawer full of shiny sharp objects. What does she do?  She remembers all the thrillers she’s read and the fights in them. She applies all these rules:  Hit first and hit hard… But she applies them verbally. She fights just like Jack Reacher but using her brains instead of her fists. She talks her way out of danger. I love that.

The second is the scene where Helen reflects on her life and in a few paragraphs sums up the whole small town experience. The tastes, the sounds, the sights, the feelings.  There’s a sequence I admire in Viet Thanh Nguyen’s The Sympathizer where the hero spends a few dense, beautifully written paragraphs summing up his memories of Saigon. I think this is my homage to that amazing piece of writing.

HELLMOUTH is in spots, more explicitly sexual than traditional thrillers.

I refuse to compromise on the sex. The nastier the better.

Aren’t you worried that nasty sex might scare off readers?

Nope. People who avoid nasty sex aren’t on my Christmas card list anyhow.  And not all the sex is nasty. One of my goals was to give readers a glimpse of the inside of a marriage. I love Beau and Helen’s relationship. Prickly, unconventional, lusty, smart.

What were your goals in writing HELLMOUTH?

You know, the usual. Kick ass and take names.

Well, I might have been a tiny bit coming to terms with my mother and my home town. HELLMOUTH is based on my mother and step-father and the small town I grew up in. It’s both a love letter and a pay-back. That might explain the many ambiguities. But beyond that, I want what we all want. To entertain, to surprise, to build a world and let you live in it for a while. 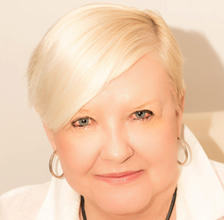 Meredith Anthony is co-author of the thriller, Ladykiller (Oceanview). Her award-winning short film, Ladykiller, starring Oscar winner Melissa Leo, is available on YouTube. Her short stories have appeared in Ellery Queen Mystery Magazine, Alfred Hitchcock Mystery Magazine, and in Philadelphia Noir (Akashic). Her play, Murder on the Main Line, has had staged readings in New York and Philadelphia. She is a member of Mystery Writers of America, International Thriller Writers, and the Dramatists Guild. She lives in New York City.

To learn more about Meredith, please visit her website.