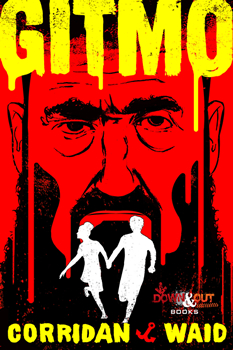 Retired smuggler Dixon Sweeney exits Raiford after eight long years behind bars, vowing “From here on out, things are gonna be different.”

And boy is he right: his wife has left him, emptied his safe deposit box, moved their entire house to Key West, and is shacking up with Sweeney’s former partner and Best Man. Worse yet, Buck Wiggins is after him for a sixty-five grand debt. But Sweeney’s broke! So Buck sends Gooch and Gunther Canseco, twin towers of steroidal ape stuff, to tune Sweeney up each week until he pays Buck back.

And he thought life in prison sucked.

When a mysterious Cuban-American approaches Sweeney with an offer, Sweeney is forced to accept. The payoff? A cool half mil. The problem? The money is hidden inside a house in Cuba. Worse yet: on Guantanamo Naval Base, a.k.a. GITMO.

Strap on your seat belt and prepare for the ride of your life, as unlikely hero Dixon Sweeney and his beat-up Chris-Craft challenge the Gulf Stream, waterspouts, man-eating sharks, the crazy Canseco twins, the Coast Guard, U.S. Navy, the entire Cuban military, and one super sexy senorita in this hilarious romp through the Florida Straits.

The Big Thrill caught up with authors Shawn Corridan and Gary Waid to discuss GITMO:

Shawn: First and foremost, I hope our readers come away with a deeper understanding of the plight of the Cuban people and how brutal the Castro regime has been and will continue to be. Secondly, I hope our readers are entertained by the way our hero, Dixon Sweeney, comes to learn this same lesson along the way. It was my intention from the day I first started outlining this story to take the reader on a nearly impossible journey to a (formerly) forbidden place. I hope our readers feel like they have just taken a trip to Cuba…avoiding airfare and, more importantly, the God-awful TSA line.

Gary: I hope the readers are amused.

Shawn: GITMO is intended to give readers a heightened sense of suspense, excitement, surprise, anticipation and anxiety. If GITMO delivers that, then it’s done its job as a thriller.

GITMO also continues the tradition of “Florida Glare”, where crime takes place not so much at night like most noir novels but rather in the brazen, matter-of-fact light of day. Mostly, though, GITMO perpetuates the notion that writer’s from Florida are fucked up individuals and should be candled with hair.

Shawn: Through research for my original screenplay (from which this novel was adapted) I discovered how truly unique Guantanamo Naval Base truly is. To wit: the U.S. has been leasing the 45-square mile chunk of real estate since 1903; GITMO is the only U.S. base in a Communist country; on the U..S side of the razor wire, is the world’s densest mine field—735 acres planted with 70,000 anti-personnel and anti-tank mines; Camp X-Ray houses the “worst of the worst” terrorists in the world.

Gary: I’ve only been to Cuba once. I was surprised at how much I remember.

Shawn: I was actually towed into GITMO by the U.S. Coast Guard during an ill-fated smuggling run to Jamaica. Not impressed? My co-author, Gary Waid, was imprisoned for 8 years for smuggling over 19 tons of weed. So if you’re looking for a bawdy, raucous, unexpurgated nautical tale about GITMO, Cuba and smuggling, written by guys who have been there, done that, well, you’ve found it.

Gary: It began as a movie script by my partner, Shawn Corridan.

Shawn: McGuane and Hemingway for the way they live(d) life, then wrote about it. Ditto Bowles and Bukowski, Donleavy and Dickens, Melville and Marquez. I’m a huge fan of Faulkner for everything, Twain for everything else and Cormac McCarthy because that’s the way God would do it. But don’t you try it. Please.

Shawn Corridan grew up in the shadow of Cape Kennedy, his father a NASA engineer. A high school football star as well as a surfer, he attended the University of Hawaii on a football scholarship and for the opportunity to surf the North Shore. After graduation, he got married, traveled the globe, sailed the Caribbean, was rescued by the Coast Guard twice, wrote market research reports for Wall Street, and worked in pharmaceutical sales. Shawn also won the Final Draft Big Break Screenwriting Contest and is a member of the Writer’s Guild. Corridan lives in Merritt Island, Florida, with his wife Julie, a stone’s throw from long-time friend and co-author of Gitmo and Goliath, Gary Waid.

Born a Navy brat in San Diego, Gary Waid has done almost everything there is to do in the water, from commercial fishing to operating tugboats to repairing yachts. He has also been a roofer, a carpenter, a musician, a tractor-trailer driver, a writer for magazines—as well as a guest in the federal prison system for smuggling marijuana. When he reunited with his friend Shawn Corridan, they coauthored Goliath and GITMO. Waid lives in Cape Canaveral, Florida on a sailboat with his wife Patty and their two dogs.