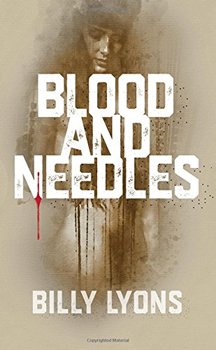 Twenty-five year old Steven Jameson is a junkie who lives on the streets and finances his habit by robbing unsuspecting tourists. One Saturday night he meets a beautiful stranger named Anna Marie Jennsen, who tells him that she’s the leader of the Morphia Clan, a family of vampire addicts. Anna Marie offers Steven membership in the clan, provided he can pass the gruesome test of loyalty she requires. Steven is transformed into a vampire and formally inducted into the clan, where he quickly makes friends with his fellow vampires. Among these are Teresa, a tiny, offbeat vampire who appears to have joined the clan in her late teenage years and Eric, who Steven immediately dislikes and distrusts. Steven’s story climaxes during a raid on a large pharmaceutical manufacturer, during which he discovers that not everything is as it seems, and that there are hidden dangers everywhere.

The Big Thrill caught up with Billy Lyons to discuss his debut, BLOOD AND NEEDLES:

1. No one is beyond redemption.
2. It’s never too late to find love.
3. Drugs are bad, and will most likely take away everything you hold dear, unless you happen upon the slim chance of becoming a vampire and achieving immortality.

Even though there are similarities between BLOOD AND NEEDLES and other contemporary vampire novels, my goal from the beginning was that it should stand out from these. I wanted to address questions that to my knowledge, have been unanswered in other vampire tales. One example of such a question is: What happens to the person after he/she leaves the human life and before he/she is resurrected?

I also wanted to move as far away as possible from the idea that vampires fall in love with humans. In my mind, vampires see humans as nothing but food.

I was very surprised that I actually came to like the protagonist, Steven Jameson. As a human junkie, he is a reprehensible person who has done reprehensible things. But as a vampire he gets a second chance, and is redeemed.

Perhaps the most controversial event of the book is the sacrifice Steven must make to gain entry into the clan. It’s a shocker.

My primary literary influences are Richard Matheson, Stephen King, and Peter Straub. These writers taught me that a successful horror story must start with vivid, rich, and believable human characters that the reader can identify and sympathize with. The ghosts and ghouls must come later.

Billy Lyons became an avid reader and writer of horror fiction in early childhood. He is the author of two published short stories. “Cell 334” was published in the November 2014 edition of Another Realm Magazine. “Black-Eyed Children, Blue-Eyed Child” was published in High Strange Horror, a horror anthology published in 2015 by Muzzleland Press, where Billy is a contributing writer of book and magazine reviews. Blood and Needles is his debut novel.

Billy possesses a B.A. and M.A. degrees in psychology from The Citadel-The Military College of South Carolina, and George Mason University, respectively. He also possesses an Associate’s Degree in Nursing from Southwest Virginia Community College.
Billy lives in the Appalachian Mountains of Southwest Virginia.