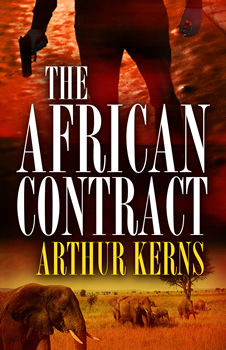 Arthur Kerns writes thrillers set around the world and featuring a free-lance protagonist, Hayden Stone, who gets into a lot of trouble trying to sort out the bad guys. His methods are often unconventional, so the trouble is as much with the powers-that-be as the terrorists themselves. Both want him out of the way. Currently there are three books in the series: The Riviera Contract, The Yemen Contract, and THE AFRICAN CONTRACT, all published by Diversion Books.

Following graduation from college, Arthur did a stint with the U.S. Navy amphibious forces, and then joined the FBI with a career in counterintelligence and counterterrorism. After the FBI, he consulted with the intelligence community and other U.S. government entities. His foreign assignments for them have taken him all over the world. I asked Arthur about his career and how it led to his writing.

You have firsthand experience of the type of work that you write about. How much has that experience helped you with your novels, and how much did you need to brush aside to keep things fast-paced and exciting?

My plots and story lines are original and I make an effort to avoid using any cases I worked on or had any knowledge of. The last thing I want to do is unintentionally reveal any sources or methods that might put a person’s life in jeopardy. That said, I do enjoy bringing in the flavor of intelligence work and use many of the problems and challenges people in the intelligence game face on a daily basis as a background. Much of the work can be deadly boring, like sitting in a car on surveillance or listening to a wiretap. Then when the action begins, things get interesting.

I do use my travel experiences in foreign countries in all my books. When I travel, I’ll fill my moleskin journal with little details, like the eerie midnight drums, bonfires, and dances on the beaches in Ghana, or the trek I took alone into eastern Yemen. 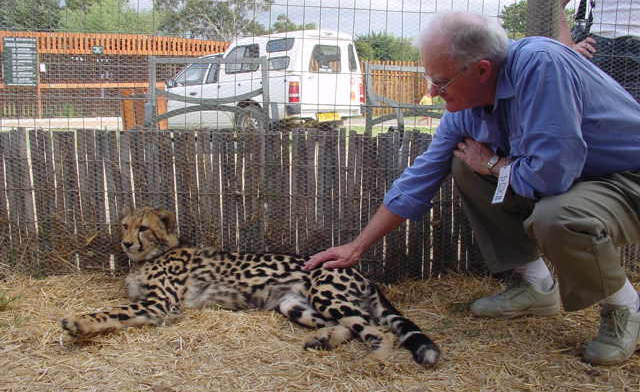 Arthur with a king cheetah at the Cape Town wildlife facility.

What made you decide to write thrillers?

Years ago, I started on a 1929 murder mystery in Arizona, which still is not finished. Just to escape the frustration, and keep writing, I thought I’d try a different genre. Why not a spy thriller? Something clicked and I found it fun to write about something familiar.

Hayden Stone has no time for the niceties of politics and diplomacy. He wants to finish the job before the bad guys achieve their ends. As such he’s an interesting but also a difficult protagonist. How did you come up with him? Is he based on a real character, or is he “wishful thinking”?

Hayden is a creature out of my imagination, based on a composite of people I’ve met over the years. You can just imagine what people in any government have to put up with these days. The bureaucratic rules and regulations just strangle initiative and creativity. The only good thing during a war, whether it be a military action or spy covert operations is that attaining results is more important than ceremonial niceties. This is when the action happens.

Hayden Stone finds himself part of the effort tasked to stop terrorism. He enjoys it and is good at his job. If the war against terrorism ever ends, he along with many professional military people will be faced with a bigger challenge. Handling peace. 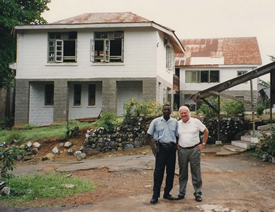 The African Contract revolves around a stolen nuclear weapon left over from the apartheid days in South Africa. Certainly such weapons existed, and in the whirlwind of the transition it’s quite believable that one went unaccounted for. Now a rightwing Afrikaner group is willing to sell it to Arab terrorists. Strange bedfellows. Or maybe not?

This is the case where the plot came right from an old story in the press. Years ago, I read about South Africa having nuclear bombs and then the existing regime having the courage and wisdom to dismantle them prior to the turnover in government. It was a coin toss whether I’d have the villains be rightwing, radical leftwing (and there was a lot I could use there), or the criminal underworld. I know that would have been a three-headed coin.

In his attempts to discover the location of the bomb and head off the terrorists, Hayden works with other CIA operatives, a South African intelligence agent, and an Israeli Mossad agent. Sometimes it’s not clear that they are all pulling in the same direction. Are joint operations like this common in the real world, and how does one overcome the fact that each agency will have a different agenda?

Yes, these joint operations have become common since responsible nations have come to the realization that it is in everyone best interests to cooperate in combating the terrorism threat. Agendas differ, maturity and patience is required, and interaction on the working level is most important. This is why I chose Hayden Stone to be a “boots on the ground” type of guy. He has friends in high places, who spend a lot of time keeping him out of hot water, but he’s not the type of action hero who hobnobs with heads of state. Just with a contessa on the Riviera.

On arrival in Africa Hayden Stone is greeted by an unfriendly black mamba.

In THE AFRICAN CONTRACT it is pretty evident that the US, South Africa, Israel, and Canada are intent on solving a very serious issue, but at the same time the parties involved have to have their own country’s interests in mind. I’ve seen this first hand and sometimes matters can get dicey, and they are always interesting.

The book ranges all over Africa and the story is obviously written by someone who knows the countries first hand. How much time have you spent in Africa and what persuaded you to set a Hayden Stone adventure there? 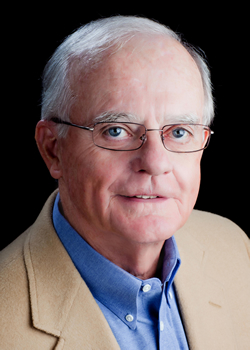 Location is always a character in my novels. Except for Namibia, I’ve spent time in all the countries in THE AFRICAN CONTRACT from weeks to over a month and some numerous times. For me the continent is fascinating. Beautiful and scary, mysterious and enlightening. There is a feel and smell to the place, no matter where you are, what country you’re in, that captures your soul. Now there is a character.

Unfortunately the world is full of hot spots and failed states. Does Stone have more adventures ahead of him?

Yes, right now on my computer Hayden is having one hell of a problem in Tuscany, Italy. I hope to have him out of danger and the manuscript to my agent by summer.