Finding the Terror in the Ordinary 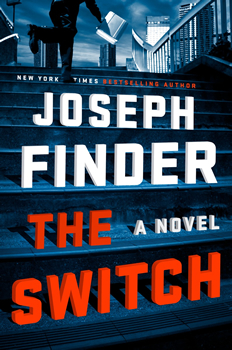 You’ve probably been there. Tired, frazzled, running behind. And then, BAM! You’re stuck at airport security. Now, you’re not only stripping off half your clothes, you’re yanking out your electronics and shooting them through the X-Ray machine, praying you aren’t randomly selected for further screening—you ain’t got time for that.

But what if, when you’re hurriedly gathering your shoes, belt, phone and laptop, you accidentally walk away with someone else’s stuff?

That almost happened to author Joseph Finder when at an airport a few years back, he nearly snagged a Macbook Air, thinking it was his.

“Then I remembered that mine has a large sticker on it, my HELLER license plate,” he says. “So, crisis averted. Until it occurred to me: what would have happened if I’d taken the wrong one? Probably nothing more than a big hassle. But that’s when my warped imagination took hold.”

And thus, THE SWITCH was born.

The story begins in much the same way, with seemingly ordinary business-owner Michael Tanner making his way through the long TSA line after an even longer few days of business. When he accidentally picks up the wrong laptop—a computer that belongs to U.S. senator Susan Robbins and contains top secret files that should never have been on it in the first place—Tanner has much more than a hassle on his hands.

The senator isn’t the only one who wants the laptop back, and Tanner finds himself a hunted man forced to make life-or-death decisions with skills far beyond those he naturally possesses.

“The Internet and TV have actually made it a little easier to write ‘everyday hero’ stories, because now we all have access to information about surveillance techniques, and identity theft, and escape strategies,” Finder says. “On an ordinary day, a coffee merchant would never need to know how to lose a tail—but if he sees someone do it on ‘The Americans,’ he knows it’s possible. Nobody wants to be in a situation like Michael Tanner’s, but we all have fantasies about what we’d do if we were James Bond. Or at least, I do.” 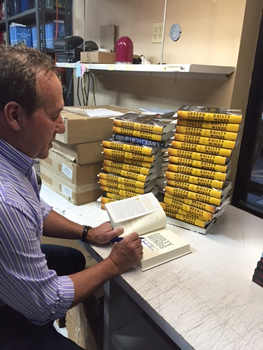 What perhaps makes Finder’s already compelling fiction even that more relatable is that the current political climate enhances the believability of situations like the one that faces Tanner in THE SWITCH—the notion that this, or something similar, could happen to you.

Whether it’s having to leap out of the path of a car that’s plowing out of control along a popular street, witnessing a horrific bombing in a crowded area, or coming to the defense of someone who is being harassed or bullied, these kinds of tragic events are becoming more prevalent. Which may have readers turning to fiction to make some sense of our ever-changing world.

“The daily news brings me stories I could never use in a book, because nobody would believe them, or the actions can’t be justified by anything you know about the characters,” Finder says. “Fiction has to make sense. Real life doesn’t. If anything, I think uneasy times encourage even more people to find comfort in stories that resolve dangerous situations and punish the bad guys.”

That’s certainly the case in each of Finder’s 14 novels, the bulk of which have spent time on the New York Times bestseller list. But fans of his work will be thrilled to note that THE SWITCH harkens back to one of his earlier books, Paranoia—in addition to the twists and turns that create heart-pounding and page-turning suspense, Finder has peppered in humor that provides breaks from the intensity of the pacing, but ironically, also ratchet up the fear factor.

“We need to feel a sense of the ordinary, of everyday life in order to truly experience fear or paranoia,” Finder says. “My own feeling is that especially in stories that involve ‘civilian’ protagonists, some humor is essential, because without it, the main character would just be paralyzed with fear. Recognizing absurdity in a situation can give you the distance you need to come up with solutions.” 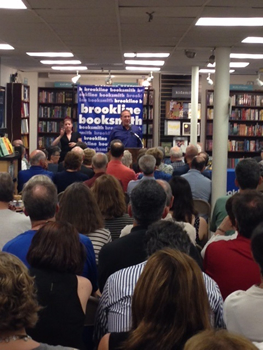 Finder will follow this same “everyday hero” trope with his next project, a hush hush novel featuring his first female protagonist since High Crimes. While that’s about as much detail as he’s willing to share at this point, Finder promises a thriller that further explores the “everyday hero” while continuing to hone his craft.

“I think I’m a better writer than I was when I started, but after 26 years of doing the same thing, I should be better,” Finder says. “Yet writing novels has not gotten any easier.  This is one of the great myths, that the longer you’ve been writing novels, the easier it gets.  Wrong.  In some ways it gets harder, because you always want the next book to be the best one of all. My chief goal is to keep writing better, leaner, tauter and more suspenseful stories.”

Which is the same advice he offers to aspiring authors, along with the ever-important adage: write what you want to read.

“Read a lot, and don’t limit yourself to recent work. Everything old becomes new again, and the old masters still have a lot to teach us,” he says. “I go back to James M. Cain’s The Postman Always Rings Twice, for that economy of storytelling, and I know that Michael Connelly always rereads Chandler’s The Little Sister for inspiration.”

Currently, Finder is reading Mark T. Sullivan’s Beneath a Scarlet Sky and has just finished John Lescroart’s Fatal—both of which he’d highly recommend.