Discovering Where Monsters Come From 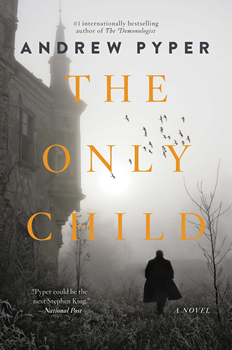 Andrew Pyper takes on the Unholy Trinity of fictional monsters in his latest thriller, THE ONLY CHILD. He brings to life an original beast—one that precedes Frankenstein, Jekyll and Hyde, and Dracula—and boldly suggests that this monster directly inspired each of those characters.

Oh, and that he is alive today.

It’s a heady thought—and one that may not work in the hands of someone less skilled. But Pyper has woven a dark tale of Gothic suspense that will make you question the origin of monsters and the nature of fear.

“I wanted to know where monsters come from,” Pyper says. “I was thinking of the kind that present as human but aren’t, or not anymore. It sent me to read or re-read some of the 19th century novels that defined the Gothic genre.”

From there, his imagination churned through a series of “What if?” questions that then made Pyper “deeply curious about what such a figure’s existence would be like, what he would want, how he would process his position as the world’s original monster. The concepts became feelings, and the feelings became characters.”

The result is a breathtaking story rife with emotion and chilling suspense, beginning from the first chapter where we meet forensic psychiatrist Dr. Lily Dominick as she interviews a nameless client accused of a twisted crime—and who makes two extremely far-fetched claims.

Pyper talking to an aspiring writer

The first is that he is more than 200 years old, and believes himself to be the original monster, the beast that inspired all other gothic creatures, including the classic three: The Re-animated Dead, The Psychopath, and The Parasite. The second claim is that he is Lily’s father.

The absurdity of such claims might require too much suspension of disbelief for readers, if not for the authenticity in which Pyper lays out the tale. Because he wanted THE ONLY CHILD to have the broad sweep of a Gothic adventure like Frankenstein, Pyper travelled to many of the same places found in the novel.

“While I enjoyed this part of the work, I had a couple of close calls,” he says. “One in particular involved me going to the same abandoned asylum on the outskirts of Budapest where Lily goes in the novel. I foolishly entered the grounds without telling anyone, and encountered a snarling guard dog that chased me around the buildings before I could escape. It was a terrifying experience that made its way into the book. 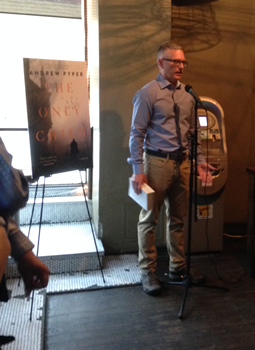 Pyper at his book launch

“Hungary, just so everyone knows, has a lot of guard dogs.”

It’s not hard to imagine the heart-pounding fear Lily (or Pyper) must have felt in that particular scene because as is often the case in his award-winning novels, the suspense is carefully crafted by relevant personal experience, and/or his ability to take the reader on a quest for answers to questions that drive the story.

“I think about suspense in terms of the space between the asking of a question and its answer. A suspenseful novel will have one or two main questions, and a number of smaller ones. Making those questions matter is crucial,” he says. “The answers are important too, but perhaps less so, really. Good suspense is built on good questions.”

One might argue that tone also has a lot to do with it, and in THE ONLY CHILD, through the judicial use of specific details, Pyper has created an atmosphere that incites genuine fear, the kind that will have you turning pages with a nightlight at close hand.

“The creation of menacing atmosphere can’t come from generic places,” he says. “It has to feel like it’s coming not from somewhere, but someone.”

The monster in THE ONLY CHILD certainly achieves that, but the book as a whole harkens back to the origins of the genre where masters such as Stephen King—an author with whom Pyper has sometimes been compared—left a lasting impression on both readers and aspiring scribes alike. 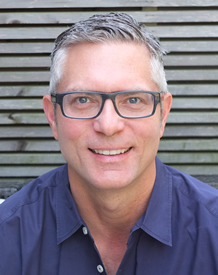 “Stephen King has been an enormous influence on me, as he has been on pretty much every thriller and suspense writer working today,” Pyper says. “In fact, I would argue that his storytelling and myth-making distinguish him as the most influential writer of the past hundred years, give or take.”

Certainly, reading those books inspired Pyper to carve out his own career in the genre, with each of his internationally recognized novels creating new questions and challenges for his growing fan base. Pyper promises his next (secret) project will do that in spades—and he couldn’t be more excited about it.

“I love what I do,” he says. “That I’m able to do it for a living—and have done for some years now—is the most amazing privilege. Sure, there’s tough days, and crappy stuff. But the lure of the story always saves me, every time.”