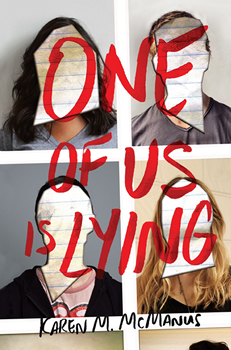 The Breakfast Club meets Pretty Little Liars, ONE OF US IS LYING is the story of what happens when five strangers walk into detention and only four walk out alive.

Seventeen-year-old Simon Kelleher is the creator of Bayview High’s notorious gossip app. On Friday, he planned to post juicy reveals about four high-profile students. On Thursday, he died in front of them.

When police learn Simon’s death wasn’t an accident, everyone is a suspect. Are they guilty? Or are they the perfect patsies for a killer who’s still on the loose?

The Big Thrill caught up with author Karen M. McManus to discuss her debut young adult thriller, ONE OF US IS LYING:

That people aren’t always what they seem on the surface—and this is true for how people see themselves, too. Sometimes it takes a shocking incident to jar you out of complacency and the ease of following a path that’s been set for you. Each of the main characters in ONE OF US IS LYING have a lot to lose when their secrets are revealed, but they also have a chance to grow and become more layered and accepting of themselves and others.

I think it’s a thriller with heart and humor. The subject matter is often dark, but the tone is light. There’s the core mystery of who killed Simon, but there are also layers to every character. They start as stereotypes, but their emotional arcs (and the twists that reveal them) are just as compelling as the “whodunit” aspect.

This was my first attempt at writing a thriller, and I found that cliffhanger chapters are a specialty of mine. Many early readers have told me they suffered from “Just One More Chapter” syndrome while reading the book—they’d tell themselves they’d read just one more chapter, and then when they got to the end they couldn’t stand to stop. I consider that the highest compliment .

The very first line I wrote for the book was, “I got the idea for killing Simon while watching Dateline.” At the time, I was going to take the story in a different direction than where it ultimately ended up. A lot of plot points moved around, but I managed to hold on to that line.

I used to read a lot of Agatha Christie as a kid, which is where I got my love of closed-room mysteries. When writing ONE OF US IS LYING I kept thinking back to Murder on the Orient Express, and how when multiple people have a motive for killing someone, it’d hard to figure out who’s really responsible. I was also influenced by E. Lockhart’s We Were Liars, which features a close-knit group of four and a shocking twist at the end. 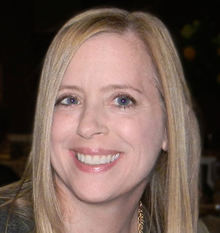 Karen M. McManus earned her BA in English from the College of the Holy Cross and her MA in Journalism from Northeastern University. When she isn’t working or writing in Cambridge, Massachusetts, McManus loves to travel with her son. Her debut young adult novel, ONE OF US IS LYING, was released from Delacorte Press/Random House in May 2017.