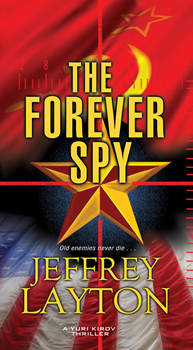 The FOREVER SPY, sequel to The Good Spy, finds former Russian naval intelligence officer Yuri Kirov quietly living as a civilian with lover and ally Laura Newman. Yuri is pulled back into the world of espionage and political warfare when he’s pressed to help the United States contain a massive environmental crisis. When his presence is discovered by a turncoat spy, Yuri unwittingly finds himself part of a deadly scheme to spark the next World War.

Jeffrey Layton talked with The Big Thrill about his recent release, writing, and the world of Russian espionage.

THE FOREVER SPY, your second Yuri Kirov thriller, picks up a year after the events of The Good Spy. What’s life like for Yuri and Laura these days? Did you discover anything new or unexpected about your characters as the sequel unfolded?

Yuri Kirov is a Russian naval intelligence officer hiding in plain sight in the United States after a botched espionage operation (in The Good Spy). He is disillusioned with the Russian government because it abandoned him and others after the spy mission failed. Yuri’s government believes he is dead so no one from Russia is looking for him.

Yuri lives with Laura Newman and her infant daughter Madelyn. Laura shields Yuri with her wealth. He is the general manager of a high-tech company. Laura purchased the business to provide work for Yuri and to help him assimilate into his adopted country.

Yuri lives a comfortable family life but uncertainty clouds his future. Yuri has no Social Security card, Green Card, or even an expired Tourist Visa. He fears his true identity will be unmasked.

What I discovered in writing THE FOREVER SPY is how difficult it must be for a person living in the United States without legal residency. The constant fear of discovery has to be unnerving. In some locales, a simple traffic ticket could end up in deportation. For Yuri Kirov, not only is he an illegal resident but he’s an ex-Russian intelligence officer who in the past spied on his newly adopted homeland. The consequences of discovery for Yuri are ominous—blackmail, imprisonment or worse. Yuri’s predicament creates the tension that propels the storyline of THE FOREVER SPY.

Many authors experience what Steve Berry calls ‘second-book-itis.’ Did you find writing a sequel to be significantly more or less challenging than penning the first in the series? What specific difficulties did you experience this time around?

I found that writing THE FOREVER SPY was a little easier than the prequel because I already knew the principal characters, Yuri and Laura. What challenged me was trying to make sure that the events and character traits developed in The Good Spy transitioned seamlessly to THE FOREVER SPY. I found myself constantly referring back to what I had written in the first book.

Your background in waterfront and coastal engineering lend authenticity to Kirov’s character. Did you conduct additional research for the series? Do you prefer to gather your intel online or in person?

The principal setting for THE FOREVER SPY is the Pacific Northwest, where I live and work as an engineer. A portion of the story is also set in Alaska where I have worked. Since much of my professional career has focused on coastal engineering and waterfront development, I try to incorporate that work experience into my fiction to augment authenticity.

For research, I subscribe to a number of technical publications regarding offshore engineering, underwater exploration and military operations. I find these sources provide timely insights into current and future marine-related technology and military affairs that help spark my imagination. I also try to use locations in my stories that I have visited in person. Where that is not possible, I try to consult with others that have local knowledge. Google Earth also provides an excellent platform to learn about remote settings.

THE FOREVER SPY was released a year after The Good Spy, and I understand you’re working on the third in the series. That’s a rigorous pace. What’s your writing process? Do you have a daily goal? Where do you write? Do you outline your plot in advance?

When I’m in writing mode, I try to produce a minimum of 500 words every day, seven days a week. I usually write during the afternoon in my office at home.

When I wrote The Good Spy, I had a rudimentary outline. That resulted in a bloated first draft that required extensive cutting and rewriting. Consequently, writing the story took much longer that I had ever anticipated.

I had a contractual deadline to meet for THE FOREVER SPY. As a result, I prepared a detailed outline. The outline helped me stay on track but was flexible enough to allow me to maintain creativity.

What initially drew you to create a Russian spy? Do you think current events between the United States and Russia will influence your espionage thrillers moving forward?

I wanted a protagonist who was not the typical character portrayed in espionage thrillers. My idea was to focus on spying from the Russian point of view—especially in The Good Spy where Yuri Kirov is conducting espionage operations against US and Canadian naval facilities in the Pacific Northwest. I based the story on actual Russian spy sub operations that took place in Puget Sound during the Cold War.

The current tension between the United States and Russia is a driving element in THE FOREVER SPY. In my story, other powers exploit that tension, which results in the unmasking of Yuri Kirov and his forced return to duty.

As a sideline, while starting work on THE FOREVER SPY I was pleasantly astounded when I viewed a Sixty Minutes segment about a former KGB-trained spy who operated in the United States but decided to remain behind after he was recalled home. Jack Barsky hid in plain sight in the USA for years before he was discovered by the FBI. His real-life story encouraged me to believe I was on the right path with my fictional character Yuri Kirov. 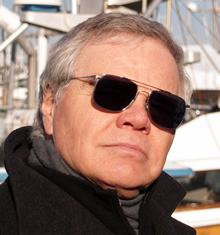 Jeffrey Layton is a professional engineer who specializes in waterfront and coastal engineering. He received his B.S. and M.S. degrees in civil engineering from the University of Washington. Jeff is a member of the American Society of Civil Engineers and the Marine Technology Society. He is also a member of the Authors Guild, Pacific Northwest Writers Association, and International Thriller Writers, Inc. Jeff uses his knowledge of diving, yachting, offshore engineering and underwater warfare in the novels he writes. He lives in the Pacific Northwest.