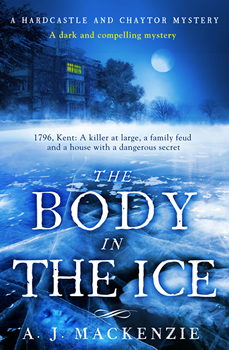 Christmas Day, 1796, on Romney Marsh. Two servants, foraging at New Hall for firewood on a freezing afternoon, discover an unexpected Christmas offering: a corpse, frozen into the ice of the horse pond. It falls to Reverend Hardcastle, justice of the peace in St Mary in the Marsh, to investigate.

At first, with the victim’s identity unknown, no murder weapon and no suspects, the task seems hopeless. But as the winter days pass, Rev Hardcastle and Mrs Amelia Chaytor slowly begin to unravel the case—and find more than they bargained for. The body leads them to an American family torn apart by war and intent on reclaiming their ancestral home, and to a French spy returning to the scene of his crimes. Ancient loyalties and new vengeance all add up to mystery, intrigue and danger, and an explosive climax.

The Big Thrill had the opportunity to discuss A. J. Mackenzie’s latest thriller, THE BODY IN THE ICE:

First, a real sense of delight at having read an exciting story well told. Second, a strong sense of time and place; the books are set on Romney Marsh in England during the French Revolution, a fascinating place and a dangerous point in history. Finally, one of the book’s underlying themes is belongingness and reconciliation, between kinfolk, peoples and races. Not a bad theme, we think, for our own times.

An interesting question, which we think can be interpreted in several ways. First, there is that sense of time and place we described above. We try to take readers into the world we have created and immerse them there, drawing them into the story so it feels like it is really happening around them. We write descriptive passages in particular with great care. Also, there’s a little of ‘I didn’t know that….!’ For example, not many novels set in the eighteenth century talk much about the role and position of black people in English society, or about the fate of white, or black, children raised by native Americans.

To follow on from the previous point, it was surprising and fascinating to learn more about the position and role of black people in English society, not just as servants or slaves, but as business people, poets, writers, artists, musicians, pretty much any walk of life you care to imagine. Startlingly, eighteenth-century society turns out to be rather less segregated than our own in some respects, and perhaps also less overtly racist. Race is not a huge theme of the book, it is something that is there in passing; nonetheless, this aspect of it was very interesting to delve into.

What happened when the American Revolution ended and there was peace between Britain and America? Some people turned at once to rebuilding the old kinship and relationships. Others couldn’t quite let go of the war. This is the story of one family that was split down the middle, between those who wanted peace and those who could not accept. ‘This war began with a British army marching on Lexington’, says one character. “It will end when a Republican army marches down Whitehall.”

Historical novelists in particular have been important, and we especially admire Georgette Heyer, Dorothy Dunnett and George Macdonald Fraser for their ability to capture a time and place, and Dunnett, John Buchan and Rafael Sabatini for their ability to create compelling stories. In terms of crime fiction, we don’t read a lot of noir, but we’re addicted to crime writers who can make characters and their emotions come alive: Josephine Tey, Donna Leon and Alberto Camillieri come to mind. Louise Penny is another favorite, and C.J. Carver is just about the best writer of plots out there today. We learned from all these writers, and many others; we still do. 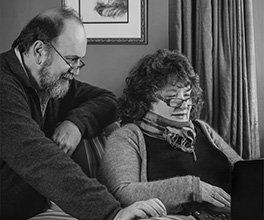 A.J. MacKenzie is the pseudonym of Marilyn Livingstone and Morgen Witzel, an Anglo-Canadian husband-and-wife team of historians and writers. They have written a number of non-fiction books before venturing into historical crime fiction. THE BODY IN THE ICE is the second novel in the Hardcastle and Chaytor series, featuring the hard-drinking clergyman and reluctant detective Reverend Hardcastle and the cool, mysterious widow, Mrs. Amelia Chaytor.

To learn more about A.J., please visit their website.