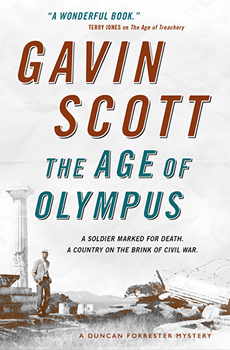 In 1946 Archeologist and former SOE operative Duncan Forrester returns to his wartime haunts in Greece to retrieve an inscription which may be the key to Minoan civilisation. But Greece is on the verge of civil war, and when a Greek poet is murdered, Forrester finds himself in the middle of a clash between communism and democracy, on a mysterious Aegean island haunted by a mythical past.

THE AGE OF OLYMPUS author, Gavin Scott, recently spent some time with The Big Thrill discussing his novel:

I hope readers will take away not just the satisfaction of a mystery solved, but the feeling that they’ve actually spent time in the Greece and Crete of 1946 and magical Aegean islands in the era before mass tourism, exploring Crusader Castles and ruined temples and hidden coves where the ghosts of ancient gods still linger.

THE AGE OF OLYMPUS weaves real people (like Lawrence Durrell) and real modern history (the Greek Civil War) with ancient history and mythology—and a murder mystery on which the fate of a nation could hang.

In researching the book I was surprised and delighted to find how many interesting people had descended on Greece in 1946, when the novel is set, and written about it, from the novelist Lawrence Durrell to the cartoonist and wit Osbert Lancaster and even the American Ambassador. Their writings and observations enabled me, I hope, to convey what it felt like to be in this extraordinarily beautiful environment in the wake of the brutal German occupation during World War Two.

The book delves into the mystery of what happened to the Urim and the Thummin, the two strange objects covered in blinking lights which are described in the Bible as being used by the high priests of Israel to communicate with God during the Exodus from Egypt. After the Ark of the Covenant, with which they are linked, I think these are two of the most thought-provoking objects in the Bible, and raise fascinating questions about the real events of the flight from Egypt.

Of the many authors who have influenced my development as a writer, two have had a particular impact on THE AGE OF OLYMPUS—John Fowles, through his haunting Greek island novel The Magus, and John Buchan, whose Aegean fantasy thriller, The Dancing Floor is one of my favourites. 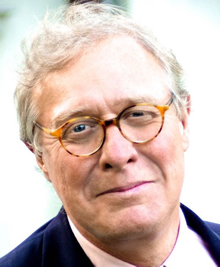 Gavin Scott is a novelist, broadcaster, actor and writer of the Emmy-winning mini-series “Mists of Avalon”, Dreamworks’ “Small Soldiers”, Working Title’s “The Borrowers” and Sci Fi’s “Legends of Earthsea”.

Born in Hull, Yorkshire, Gavin emigrated with his family to New Zealand in 1961. At 17 he spent a year as a volunteer teacher in the jungles of Borneo, working with the children of head-hunters, after which he studied history and political science at Victoria University of Wellington and journalism at the Wellington Polytechnic. He returned to Britain overland across Asia in 1973, traveling through Sri Lanka, Kashmir, Afghanistan and Iran, and worked for Shelter, the British housing charity, before joining the Times Educational Supplement, from which base he also wrote features for the London Times.

After five years as a reporter and program anchor for BBC Radio Gavin began in 1980 making films for BBC Television’s Newsnight, covering literary as well as political subjects: among his interviewees, J.B. Priestley, Christopher Isherwood, Iris Murdoch and John Fowles. He then made documentaries on science and culture for series such as Horizon and Man Alive before joining Channel Four News, for which he made films until 1990.

It was during this time that he started writing novels, including Hot Pursuit (about a Russian satellite that crashed in New Zealand) and A Flight of Lies (about the hunt for the bones of Peking Man). His novel Small Soldiers was a bestseller for Grosset and Dunlap, and he has recently written a Dickensian historical novel set in the nineteenth century, The Adventures of Toby Wey and The Age of Treachery for Titan Books, which was published in 2016.

To learn more about Gavin, please visit his website.