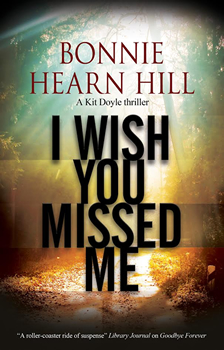 Farley Black, Kit’s friend and former radio co-host, is missing. He was supposed to be surfing but he never arrived at his Malibu Beach destination. As the last person to hear from him, Kit is determined to find out what’s happened.

But when Kit searches Farley’s home, a surprising discovery makes it clear that Farley has been lying to her—and everyone else. As she heads north in search of the truth, a series of menacing incidents convinces Kit that she’s being watched. Someone is tracking her every move. As her unknown pursuer grows bolder and more reckless, Kit realizes she isn’t just looking for her friend—but running from a killer.

Author Bonnie Hearn Hill took some time out of her busy schedule to discuss her latest book, I WISH YOU MISSED ME, with The Big Thrill:

Here’s what I took away from it. Writing this book taught me how we are changed by conflict and also what it teaches us about ourselves. It also made me question the pros and cons of off-the-grid communities, a topic I explore in the book. The book is set in a Sacramento homeless shelter where Kit volunteers and in a rural area on the Redwood Highway. I hope readers are able to experience these areas.

It’s a character-driven exploration of what we do (and don’t do) for friendship and love. Kit, the protagonist, is vulnerable after what she experienced in Goodbye Forever, which published in 2016. She is forced to admit that she can’t find or even look for Farley without allowing someone else to help her, even someone as unlikely as Virgie. I wasn’t born strong, and neither are my characters. But we can become strong, and if I have a message, that’s certainly part of it.

Much of what I discover is always about character. I discovered the person I labeled a killer was only desperate, and that the real killer was a character I hadn’t yet created. I learned that Virgie has secrets I still haven’t discovered. I learned that the relationship between Kit and John Paul, the former cop, is more complicated than I originally assumed. I was surprised to learn that Farley had been a promising classical musician until he broke his left hand in a fight. That was a shocker but also an organic development; I hadn’t been sure how he ended up in radio. Every book is full of surprises for me, and these are just a few.

“I Wish You Missed Me” is graffiti in San Francisco. Seeing it broke my heart. Who writes something like that? And for whom? The only way I could examine (not answer) these questions was to write the book.

Lawrence Block was the first crime writer who made me realize how character can drive a story. Laura Lippman showed me how that was possible with a female protagonist. Dennis Lehane and S.J. Rozan were the first whose books helped me understand that social themes could deepen and not distract from story. Because of my TV segment, I read numerous authors, love discovering new ones, and am still learning. 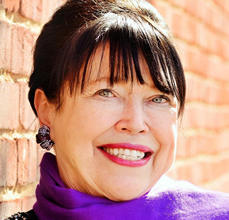 This is the third in the Kit Doyle series and the author’s seventeenth novel. A California native, Bonnie Hearn Hill is passionate about how conflict changes us and both allows and forces us to discover new truths about ourselves. A mentor to numerous writers, she has appeared on a Central California television’s book segment for fourteen years.