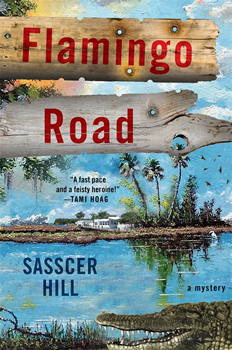 Baltimore police officer Fia Mckee is suspended for excessive use of force. Given a second chance, she’s sent to work undercover for the Thoroughbred Racing Protective Bureau (TRPB) at Gulfstream Park in Florida, where her assignment is to spy on two racetrack workers suspected of illegal activities and whose horses continue to outperform all expectations.

To complete her cover story, Fia moves in with her semi-estranged brother, Patrick, and his daughter, Jilly. Fia’s investigations become twofold when Jilly disappears after an off the grid Cuban gang steals her beloved pony for horse meat. Along the way, Fia encounters, a (very handsome) do-gooder who’s close on their trail, and a cabal of super wealthy gamblers who will stop at nothing to ensure they always win.

The Big Thrill caught up with Sasscer Hill to discuss her latest novel, FLAMINGO ROAD:

A new appreciation of the complicated and vast law enforcement agencies involved with protecting the integrity of the sport of horse racing.

It shows a picture of good against evil different from anything written about crime when only humans are involved. There are evil people who think nothing of drugging a horse so that it cannot feel pain and will run until it breaks. And there are people willing to give their lives to protect the animals they love.

The extraordinary help some people gave when I contacted them with research questions. A professor of pharmacology at Oklahoma State University was so into the subject of the illegal drug Demorphin, that we came up with a character who could have starred in “Breaking Bad.” This character, the chemist Dr. Steve Craigson, became one of my favorite subplots in the novel.

A vivid description of South Florida’s C-9 Basin. The wild west of Florida, it straddles the western edge of Broward and Miami-Dade counties, along one side of the Everglades. Mostly men live there, Cuban and Haitian squatters and almost everything they do is outside the law–cockfights, horse slaughter, and dogfights.

As a child Walter Farley was a huge influence because his detailed novels about the Black Stallion were suspenseful, and impossible to put down. Only recently did I learn that Farley’s brother was a horse trainer in New York and provided much of the accurate details of backstretch life that gave Farley’s books such authenticity. Since I graduated from Dick Francis and started writing my own novels, my main influences have been Michael Connelly, Lee Child, Robert Crais, and Steve Hamilton, because they are all such damn good writers! 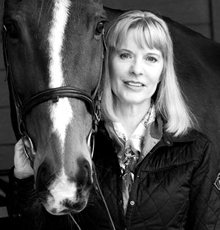 Sasscer Hill, formerly an amateur jockey, was an owner and breeder of racehorses for decades. Her multiple award-nominated mystery and suspense thrillers are set against a background of big money, gambling, and horse racing.

Her new “Fia McKee” series, to be published by St. Martins, Minotaur, won the 2015 Carrie McCray Competition for Best First Chapter of a Novel and was a runner up for the 2015 Claymore Award.

To learn more about Sasscer, please visit her website.