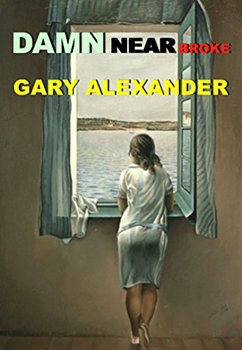 Buddy and Martha Whitacre, a blue-collar couple, celebrate early retirement with a trip to Spain. They return home to discover that they’ve been wiped out by the investment fund that made retirement and travel possible. DAMN NEAR BROKE is the tale of how they deal with impending poverty, each other, and especially the shame of it all.

Seniors fleeced by a phony investment scheme, why did you choose this story line?

Since I’m far too young to be an AARP member, I steal the monthly magazine out of a neighbor’s mailbox. Nearly every issue has horror stories of people who’ve fallen victim to a variety of scams and articles warning of new twists in impoverishing seniors.

You’ve labeled this as a cautionary tale, rightfully so. Is this based on a true story or did it almost hit anyone close to home?

Fortunately, I’ve experienced nothing of this sort up close and personal.

You’ve inserted a number of complications: Their best friends next door who hit the lottery big. An obnoxious gynecologist son-in-law. A strange assortment of jobs Martha and Buddy take to supplement their meager income. Why?

So it’s a 266-page-long novel instead of a piece in the AARP magazine.

Why do you alternate chapters in the first person between the protagonists, Buddy and Martha?

This long-married, devoted couple is an example of the old saw that opposites attract. Martha is rock steady and Buddy is a sexagenarian hothead, a characteristic that gets them into a pickle in Barcelona.

When they arrive home from their dream, post-retirement trip to Spain and face the realization that they’re DAMN NEAR BROKE, they handle their predicament in totally different ways. They are united, though, in keeping it a secret from everyone. Shame and pity are far worse to them than poverty.

I have to ask. Why the shapely young lady on the jacket? Is it just a cheap trick to sell books?

Okay, that too. Girl at a Window, painted by Salvador Dali in 1925, is displayed at Madrid’s Museo Nacional Centro de Arte Reina Sofia. Girl is a hot item in the gift shop, available on postcards, tote bags, et cetera. Girl triggers something in Buddy’s past that causes him to behave even more impulsively than usual.

Gary Alexander has written 17 novels, including LOOT, fourth in the mystery series featuring comic Buster Hightower. DISAPPEARED, the first in the series, has been optioned to Universal Studios. He’s written 150 + short stories and sold travel articles to 6 major dailies. One story appeared in BEST AMERICAN MYSTERY STORIES 2010, another in ICE COLD, last year’s Mystery Writers of America anthology. DRAGON LADY, his Vietnam novel, published by Istoria Books, available both as an eBook and print-on-demand. His latest two novels, FATHER’S DAY and A BOOK OF FACTS: A NOVEL are being published by Absolutely Amazing eBooks. Alexander is a nonsmoking, nondrinking vegetarian. He does, however, abuse caffeine and chocolate.