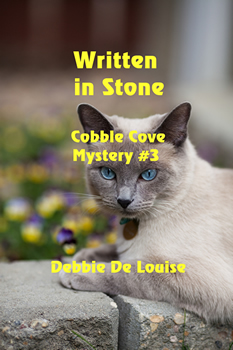 Was the strange email her husband received from the fictional detective in their mystery series a threat? Did the killer mistake the woman shot in the library for Alicia or the victim’s twin sister?

After Sneaky goes missing from the library, will he turn up before a young girl becomes ill with worry over his disappearance? And will he return in time to outsmart Fido by being first to find the perpetrator’s smoking gun?

While waiting for the killer’s next move, Alicia has other concerns. An old flame of John’s is in town and her friend, Gilly, has adopted the role of Miss Marple to aid her sheriff boyfriend in his investigation.

When all clues point to one of her co-workers, Alicia joins Gilly in searching for the answers to the mystery.

Will they survive . . . . or is their ending written in stone?

I hope that readers will continue to enjoy my Cobble Cove mysteries with this third installment of the series that includes A Stone’s Throw and Between a Rock and a Hard Place. This book, like the first two, can be read as a standalone, although reading the complete series will help readers understand the characters’ development.

Written in Stone, as part of the Cobble Cove cozy mystery series, includes a crime (murder) that composes the main plot. There are also subplots involving the characters who live in the small, fictional upstate town of Cobble Cove, New York. In keeping with a cozy theme, the scenes in the book feature no explicit violence or sex but depict activities by the quirky residents and a library cat and pet dog.

I was surprised by how I was able to incorporate some details that can lead to new plot lines in a following book, and I was also surprised by one of the twists at the end. As I do in each book of the series, I introduced some new characters but focused on the main ones adding more depth to their personalities as they continue to be involved in new mysteries. I don’t adhere to strict outlines, so many of my stories develop as I write which often surprises me and hopefully will my readers. 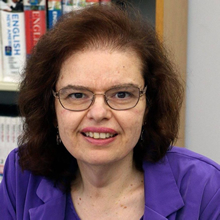 Debbie De Louise is an award-winning author and a reference librarian at a public library on Long Island. She is a member of International Thriller Writers, Sisters-in-Crime, and the Cat Writer’s Association. She has a BA in English and a Masters in Library Science from Long Island University. Her three published novels include Cloudy Rainbow, A Stone’s Throw, and Between a Rock and a Hard Place (Solstice Publishing, 2016) that was on the Amazon bestseller list for cozy mysteries. Her romantic comedy novella featuring a jewel heist caper, When Jack Trumps Ace, was published in February 2017. Debbie has also written articles and short stories for several anthologies of various genres. She is currently querying agents to represent her psychological thriller, Sea Scope. She lives on Long Island with her husband, daughter, and two cats.

To learn more about Debbie, please visit her website.