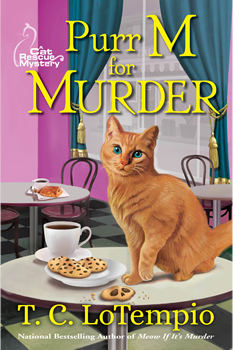 When I was a child, we had a cat named Boots, a shy gray-and-white girl who used to read with me. Her whole head would move from left to right as she scanned each line, and when she got to the bottom of the right-hand page, she’d look up to tell me to turn the page. If I started to turn it too soon, she would stop me with a paw. As you can imagine, I have a soft spot for cat stories.

PURR M FOR MURDER, the first of T.C. (Toni) LoTempio’s Cat Rescue mystery series, is a worthy addition to the cat mystery genre, with big-hearted sympathetic characters and a lovable sleuthing feline. It’s a playful romp published by Crooked Lane and written by a cat lover who, along with her uncredited partner, Rocco, also pens the Nick and Nora mystery series from Berkley Prime Crime.

Asked about her writing journey and how she came to be a mystery writer, Toni says her lifelong love of mysteries was sparked when she read her first Nancy Drew mystery, The Secret in the Old Attic, at the age of ten.

“I’ve always loved making up stories,” she says, “ever since I was little. I’d read Superman comics and if I didn’t like the end I’d rewrite it! My tastes in reading have always gravitated toward mystery/true crime. I devoured Erle Stanley Gardner and Agatha Christie early on—so I guess you could say it was a natural progression.”

Congratulations on your new book, Toni. What do you think accounts for the popularity of cats in the cozy mystery genre, and what makes a cat such a perfect sleuth?

As Sydney McCall says in the beginning of PURR, ‘cats are a mysterious kind of folk’ and I think anyone who has ever owned a cat (or rather, been owned by a cat) would agree.  They are a never-ending mystery.

As a long-time cat lover, I know that’s true, and it’s reflected in your books. What distinguishes your books from other “cat” novels?

Well, for the Nick and Nora series, how many cats do you know who spell out clues with Scrabble tiles?  In the Cat Rescue series, Toby isn’t as overt a detective as the cat Nick in my other series, but he manages to communicate clues to Syd in his own inimitable way.  They didn’t call him “The Wanderer” for nothing. The cats I write about aren’t afraid to take a front and center role in the mystery solving.

This series deals with Sydney McCall, who returns to her hometown to help her sister, Kat, run a local animal shelter. How does this sibling relationship affect the plot and theme of the story?

Kat is pegged suspect number one by the lead detective on the case, and of course Syd (and Toby) set out to prove that she didn’t do it!  Despite Syd’s absence, the sisters are really close (sort of an homage to the old Dana girl mysteries which I was also fond of).

You’ve said that being able to plot a book always surprises you, because it’s something you’ve struggled with. How did you overcome that?

I’m not sure I overcome it as much as I learn to live with it.  I consider myself a “Pantser” sort of writer. I start out as a plotter but, more often than not, turn into a pantser by book’s end.

What’s something interesting about you or your work that most readers don’t know?

Not many people know that I didn’t start out writing cozy mysteries—I started out writing horror ala Stephen King, until I was told that unless you WERE Stephen King there was virtually no market for it. Cozies were popular at the time, so I decided to try my hand at that. After all, I cut my teeth on Nancy Drew, and I was always a big fan of Murder She Wrote.

That is quite a departure! Yet it seems to suit you. I imagine it involves a different sort of research. What’s the most unusual thing you’ve ever done or learned when researching a book?

I think the most interesting thing I’ve ever done was learn how to read tarot cards, for the supernatural suspense series that I wrote and also for the Nick and Nora series where one of the main characters is a psychic. I find them fascinating, and believe it or not, some things in them have turned out to come true.

Oh gosh, all the time. When that happens I usually just turn my thoughts to something else and sooner or later the muse strikes. Lately it seems as if it happens later rather than sooner.

What’s next? Will we see more of Sydney, Kat, and Toby?

Absolutely! Book 2 in the Cat Rescue series is completed, and I have Books 3&4 outlined in the expectation that the series will continue on! Expect Toby to take a more proactive role in forthcoming adventures.

Right now, the future of the Nick and Nora series is still up in the air, but I do have books 4-7 completed. They will certainly see light of day—there just might be a short break while we get our ducks in a row. 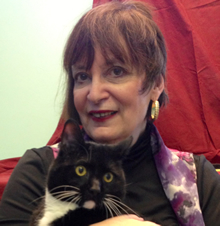 While Toni Lotempio does not commit – or solve – murders in real life, she has no trouble doing it on paper. Her lifelong love of mysteries began early on when she was introduced to her first Nancy Drew mystery at age 10 – The Secret in the Old Attic. She (and ROCCO, albeit he’s uncredited) pen the Nick and Nora mystery series from Berkley Prime Crime – and in Spring 2017, the new CAT RESCUE mysteries from Crooked Lane! She, Rocco and company make their home in Clifton, New Jersey, just twenty minutes from the Big Apple – New York. Catch up with them on her website.