The Story That Never Let Go 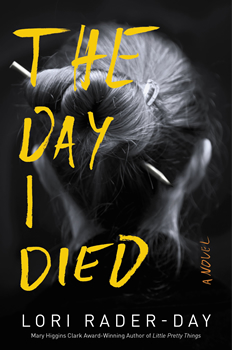 Lori Rader-Day’s new book, THE DAY I DIED, took her a decade to finish. Well, sort of. In between, she put out two other award-winning thrillers.

She started THE DAY I DIED as a short story in 2007, produced a full novel draft in 2009–and then shelved it for years (“the problem was I was not yet a novelist”) while she moved on to other writing projects.

“When I started what became my first published book, The Black Hour, I was so much more comfortable with the process and the shape of a novel-length project,” Rader-Day told us. “And then I wrote my second novel, Little Pretty Things. After that I had to decide what comes next.

“I could have let the draft of what is now THE DAY I DIED languish; it wouldn’t have killed me to let it go and write something new. But I felt as though the problem with that draft hadn’t been the story or the character or the set-up, but me. I hadn’t been a skilled enough writer at the time I attempted that book. I wanted to give that story and that character a chance.”

The result is the gripping story of Anna Winger, a handwriting expert and single mother of a young teenaged son, who is trying to hide her secret past while at the same time using her handwriting expertise to solve a crime in a small Indiana town. But the clues she uncovers force Anna to finally confront shocking truths about her own life.

So why choose a handwriting expert as the protagonist? 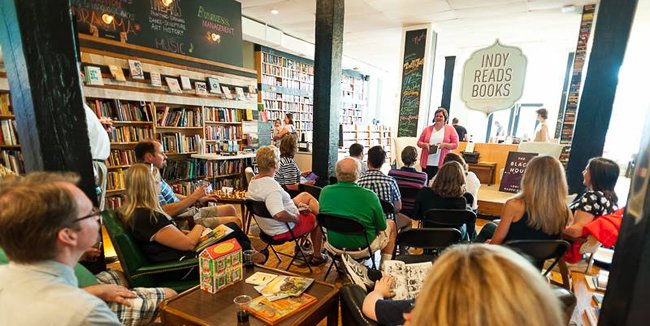 A launch event for ‘The Black Hour’ at Indy Reads Books, which is the independent bookstore storefront of a not-for-profit literacy group in Indianapolis.

“I discovered handwriting analysis at a library,” Rader-Day says. “I was there trolling for inspiration for a new short story and found it. I’m not in any way an expert on handwriting, but I liked the idea of a character trying to keep the mess of humanity tidily on paper. Of course, that’s not how humans work.”

Her previous book, Little Pretty Things, featured a hotel maid—another unusual occupation for a mystery protagonist. “What I love most is a mystery led by a person with a regular job, a regular life. To me, it’s more interesting imagining what a crime will do to a tranquil, mundane life than to try and imagine a crime that will shake a career cop. All this to say that one of these days, I’d love to write a P.I. novel or a spy novel.”

For Rader-Day, all this writing success is the culmination of a life-long love of books that began when she was a young girl.

“When I had cleaned out the kids’ section of my hometown library, the librarian sent me upstairs to look in the adult section,” she recalls. “Except that I was only 12 or so and I knew I was no adult. I was afraid to go past the circulation desk at the top of the stairs because I thought they’d send me away. I ducked into the first room before the desk—and that was the mystery room. I discovered Agatha Christie there and Mary Higgins Clark.” 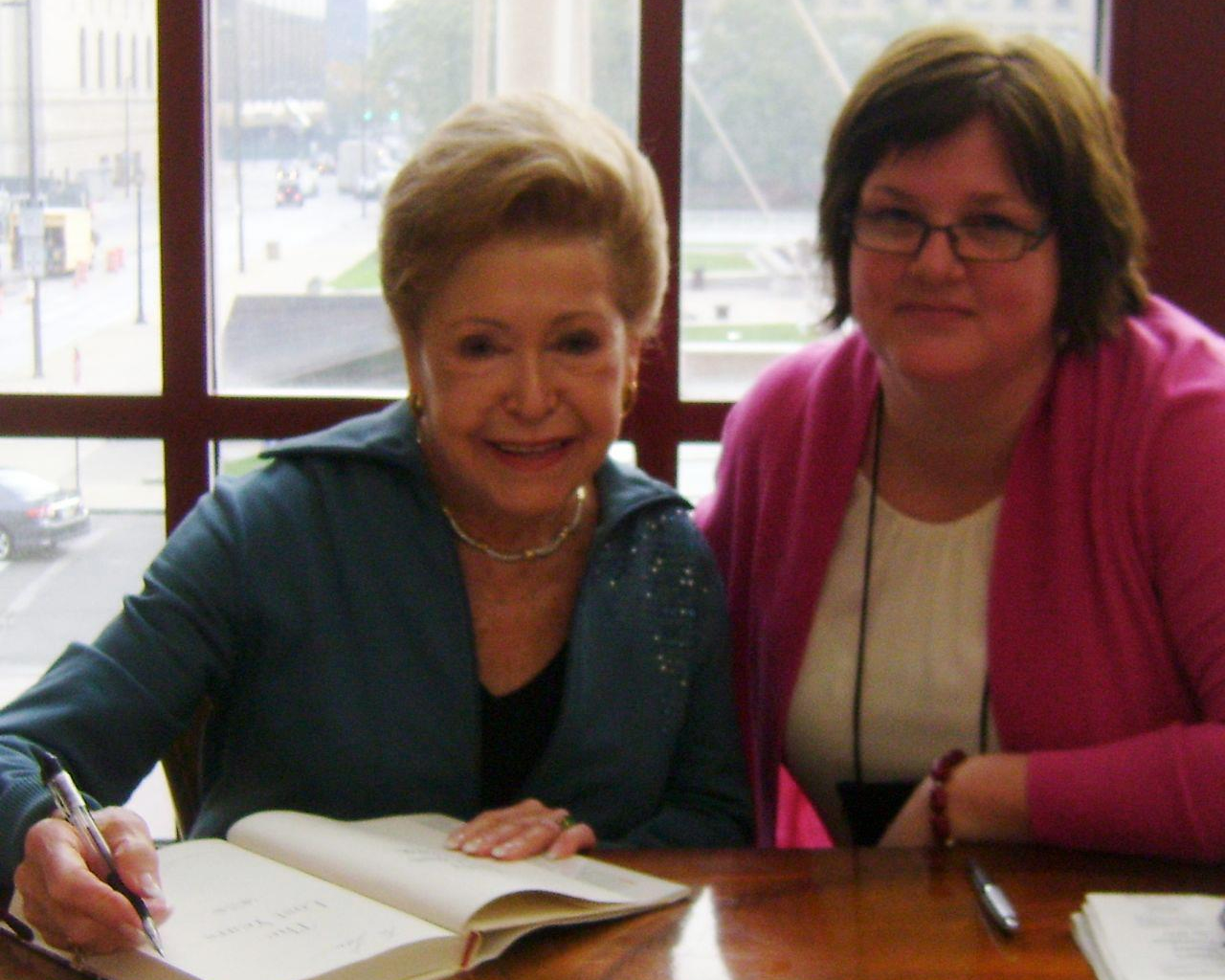 At 2012 Bouchercon in Cleveland: Rader-Day helped host a breakfast for librarians with the Midwest Chapter of Mystery Writers of America–and met Mary Higgins Clark, the keynote speaker!

She went on to a successful career in public relations—but never lost that childhood fascination with writing and mystery novels.

“I wrote short stories in high school and college, but adulthood was the skids for my creative writing. I have worked in public relations for not-for-profit organizations in health care and higher education for 25 years, which is a writing job. Which is distracting from a writing life.”

In fact, there was a five-year period where she pretty much stopped writing.

“I came out of that period by sitting down and writing. I was spurred to do it by a friend who had just recently released a book of short stories. I had to get serious about it. You have to do the work, even when you have no time, no motivation, and no one asking what happened to that writing you used to do.” 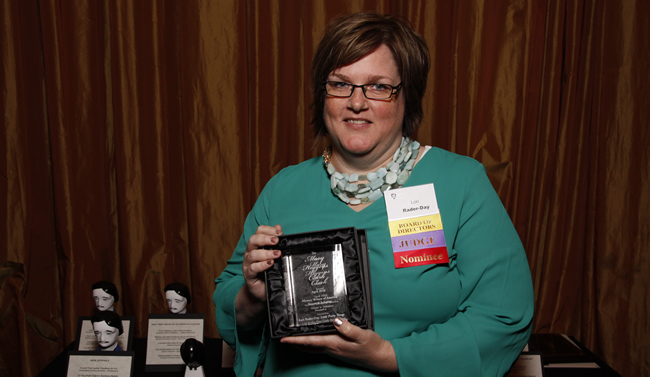 With the 2016 Simon and Schuster/Mary Higgins Clark Award for ‘Little Pretty Things’ at the Edgars.

Someone once described Rader-Day’s work as “dark stories with heart”—a description she loves. In THE DAY I DIED, she deals extensively with the issue of women fleeing abusive relationships.

“I have not been the victim of abuse,” Rader-Day says, “but the weird thing is that once I started writing about it and letting my friends know, I heard some stories I’d never heard before. Unreported stories that aren’t even reflected in our national statistics, by the way. I have known at least one woman killed by a man she had dated. This is not her story, but she was on my mind a lot as I wrote.”

She said she likes to write her books to music—and finds a good playlist essential.

“What I’m looking for is the right tone for the story I’m telling but sometimes the songs turn out to be terribly on the nose for the story. I wrote the entire back half of The Black Hour—much of which takes place on a boat on Lake Michigan—to the song “Sail” by Awolnation. I wrote a great deal of Little Pretty Things to the song “Team” by Lorde. It’s literally a girl singing about being on a team. I was writing about girls who had been on a team together. The Day I Died owes a lot to Lord Huron’s “The Yawning Grave.” It’s a waltz.”

Next up is a novel scheduled for release by William Morrow in 2018 that she describes as “an as-yet-untitled murder mystery that takes place in a dark sky park—a place kept free of light pollution so that visitors can see the stars. That kind of place? Needed a dead body.”