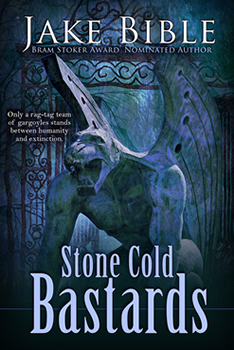 Only a rag-tag team of gargoyles stands between humanity and extinction.

Hell has released its ravening horde of demons, leaving most of humanity a puke-spewing, head-spinning mess of possession.

Humanity’s last hope? A team of misfit gargoyles—including a cigar chomping, hard-ass grotesque—come alive and ready for battle during the End of Days. They guard the last cathedral-turned-sanctuary atop a bald knoll in the North Carolina mountains.

Gargoyle protection grudgingly extends to any human who can make it inside the sanctuary, but the power of the stonecutter blood magic, which protects the sanctuary, may not be enough when a rogue grotesque and his badly-wounded ward arrive.

All the hounds of hell are on their heels. The last sanctuary is about to fall.

A sense of excitement and fun, plus a few cringes here and there.

There are plenty of paranormal/horror thrillers featuring vampires, ghosts, werewolves, and all those other tropes. This brings gargoyles into the fold. Except for some paranormal romance novels, there really aren’t any gargoyle novels on the market, no matter what genre.

Yes! What we typically call gargoyles are actually called grotesques. Gargoyles are specifically waterspouts while grotesques can be any carving or statue placed on a building. Who knew?

It is a post-apocalyptic novel, but I wanted it to be different than all the other grim end-of-the-world novels out there. My goal was to give it a Dirty Dozen or Kelly’s Heroes feel. Misfit band of badasses doing what they do best, which is kick ass, but also doing some good for all, whether they intend to or not. It’s dark, it’s brutal, but it is also fun as hell.

My hero is Roger Zelazny. There are tones of other authors that influence me, but Zelazny’s ability to bounce back and forth from, and combine, genres was brilliant. He was a true master. 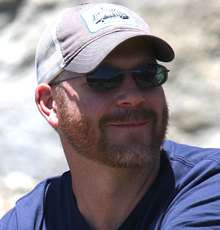 Jake Bible, Bram Stoker Award nominated-novelist and author of the bestselling Z-Burbia series, short story writer, independent screenwriter, podcaster, and inventor of the Drabble Novel, has entertained thousands with his horror and sci/fi tales. He reaches audiences of all ages with his uncanny ability to write a wide range of characters and genres. Other series by Jake Bible: the bestselling Salvage Merc One, the Apex Trilogy, the Mega series, and the Reign of Four series. Jake lives in the wonderfully weird city of Ashville, North Carolina.