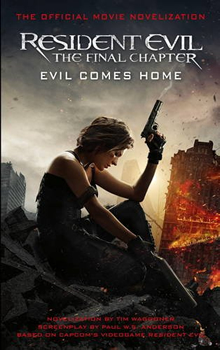 “It helped that I’d seen all the previous movies in each franchise, of course,” Waggoner says. “The action was spelled out in both scripts, in specific detail in some scenes, and less so in others, so having to imagine what the action would like on the screen in some instances took more work.”

By the way, novelization is not the same as a media tie-in. Novelizations are movie scripts that are adapted into novel format. The events and dialogue of the script are retained, but the author adds new material to flesh out the script and hopefully make it a richer reading experience. On the other hand, media tie-ins are original stories featuring existing characters or settings that appear in other media where an author is hired to create a new story using the series’ characters. Of course the contract comes with restrictions—you can’t kill off the series’ lead character, for instance. But the process for novelizations is similar to tie-ins. The big difference is that writers don’t have to pitch ideas or write outlines since the basic story already exists, and any new material they add should complement and enhance the script. 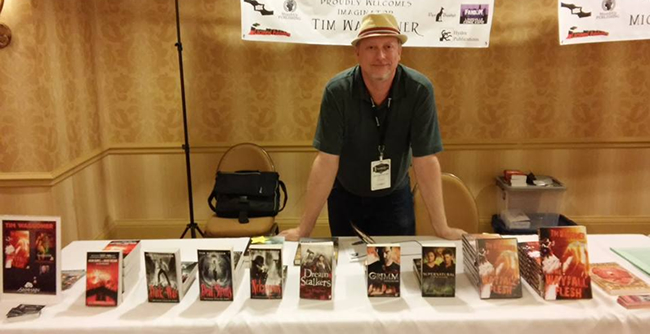 Waggoner as the featured author guest at Imaginarium.

“I started writing seriously with a goal toward publication when I was 18,” Waggoner says. “I began selling short stories to small press publications in my twenties, and began selling professionally in my thirties. My first novel was published when I was 35. Up to that point, I’d written original fiction, and I still do, but I’ve always been interested in media tie-ins and novelizations. I enjoyed reading them when I was in my teens and twenties because they provided different insights into worlds and characters that I was familiar with from other media, such as movies and TV series. I contacted editors of tie-in books and pitched ideas to them, and eventually I started getting gigs. At this point, half (more or less) of the 35 novels I’ve published have been tie-ins.” His next contract: another film novelization, this one of Kingsman: The Golden Circle.

Getting into the heads of characters created by other people is not an easy feat. However, Waggoner started college as an acting major. This enabled him to approach the scripts as if he were an actor set to portray the characters, which doesn’t differ much of how he usually writes his original work. Watching the previous films in each franchised also helped. 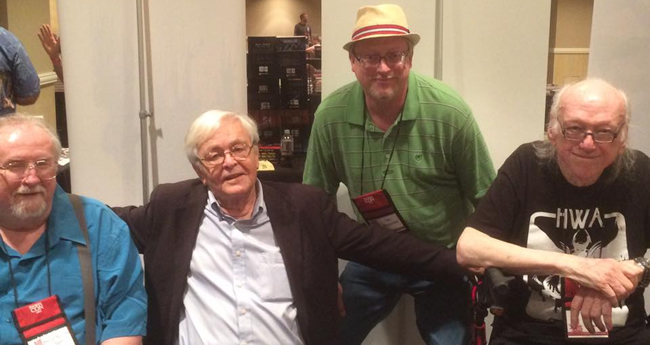 But there is much more to novelization and tie-ins than meets the eye. It’s important to get the style, atmosphere, and voice of the property right. For example, a Star Trek story should feel different than a Star Wars story. The voice of the screenwriter comes through in the scripts, and Waggoner works hard to incorporate it.

“As I said earlier, I view novelizations very much as collaborations. Writing novelizations is very different from writing an original tie-in novel. Since you’re working with someone else’s script, you already have a storyline to follow, as well as dialogue, but you’re supposed to expand the story, adding details to scenes—including characters’ thoughts and feelings—as well as developing new material to flesh out the script that complements the existing story. It’s fun because writing a novelization is somewhat like directing your own version of the film.” 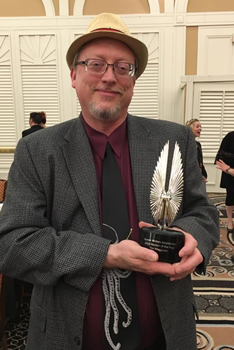 Holding the Mentor of the Year Award, received from the Horror Writers Association at Stokercon.

Another staple of writing a novelization is having to sign a Non-Disclosure Agreement as the information from the script must be kept secret. Can you picture people knowing that Darth Vader was Luke’s father before seeing The Empire Strikes Back? It would obviously spoil the surprises.

“Once it was announced that I was writing the novelizations, I expected some fans to email me asking for plot details, but no one did. So it was easy to keep everything secret! It was fun to see fans post theories about the movies’ plot points on social media and know how wrong they were!”

The author has other novels and short stories to tell. There are plans for three more entries into his Nekropolis series of horror/urban fantasy adventures featuring a zombie P.I. who works on the very mean streets of a city full of monsters. “But I’m always up for another tie-in or novelization project if it comes my way!”