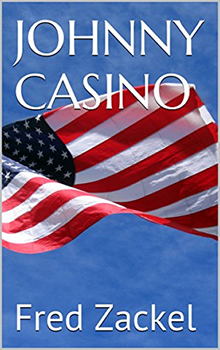 JOHNNY CASINO is a love story and a thriller. It’s about Old Vegas and gangsters, toddlers and in-laws and terrorists, and the heartbreak and joys of falling in love, getting married, and starting a family. About impossible choices and incredibly dark secrets. About finding courage and thus Ffnding yourself. About saving your family and maybe saving even the world. Or at least Las Vegas.

Johnny Caine is just twenty-three and a sweetheart of a guy. Happily married, he is a wonderful dad. He thinks he has a future in the hotel-casino industry, even if it is Mob-owned. But the glitzy, glamorous world he lives in no longer a safe place to raise a family.

Johnny Caine thought the violent shooting deaths of his father and other bystanders was a casually cruel byproduct of some turf war among San Francisco’s gangs. The drive-by killers didn’t care who died amid the gunfire. But that night when Johnny is ducking bullets for a second time, he realizes he was the real target.

Johnny suffers from synesthesia. A rare neurological “gift” where his senses are all screwed up and his “conclusions” are all jumbled up. Johnny always knows where the cops are. All of them. How many cops there are and how fast they’re approaching. A useless “gift” to anybody but the Mob. To the Bovadiglia family of Las Vegas, Johnny Caine is their secret weapon keeping the cops and Feds at arm’s length. Johnny Caine has been on their leash for nine years; he is also their Top Secret. Even as they have started taking him for granted.

Back in Vegas Johnny discovers the killings are here, too. The Bovadiglia familia is being taken out one-by-one in the most unusual ways. The Mob thinks it’s a turf war, too, that these killings just go with the territory, and “for now we got time to retaliate.” But Johnny learns he can identify, even trail the killers by their particular auras. Like following a pretty girl who uses too much perfume. Or hating the cloud a cigarette smoker leaves behind in an elevator. He learns how these killings are part of a very personal vendetta, a most vicious political payback for the family’s role with the CIA in Latin America. And he is terrified when he finds out why the killers have spotlighted him as one of them.
Author Fred Zackel recently answered a few questions from The Big Thrill about his novel, JOHNNY CASINO:

Johnny Caine is no tough guy. He just is a clean-cut All-American kid. But he’s watched and learned from the best of bad guys. And when his wife and child are kidnapped, he uses his synesthesia to go after the kidnappers alone.

Testosterone doesn’t have to be 24/7. If it is, it becomes tiresome. And worse, predictable.

Compassion/ mpathy works in thrillers, too. In The Heart of Darkness Marlow impulsively gives a cracker to a slave. In the whole novella, it is the only example of compassion, which shows us how bereft that world really is … and what the heart of darkness really is without empathy.

Too many to name, like most writers might admit. But Ross Macdonald stands out. Dignity and respect are the two words I associate both with him both as a man and as a writer. 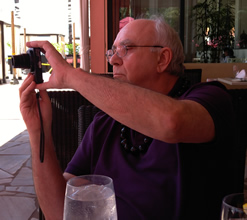 Fred Zackel is a writer of fiction and non-fiction. He was discovered by the award winning novelist Ross Macdonald at the Santa Barbara Writers Conference in 1975. Macdonald became a mentor and was influential in the direction of Zackel’s fiction writing.

Zackel published his first novel, COCAINE AND BLUE EYES in 1978 and it was followed by CINDERELLA AFTER MIDNIGHT. Both novels feature his San Francisco private detective, Michael Brennen.

In 1983 the TV movie COCAINE AND BLUE EYES was aired on NBC.

Under the pen name James Cabot, he is also the author of the RISING SUN trilogy, a 290,000-word project that took 35 years to complete.