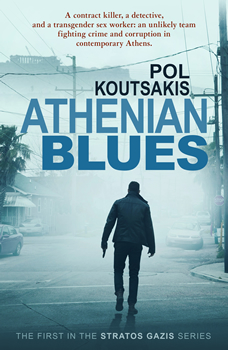 Our featured author for International Thrills this month is Pol Koutsakis, a Greek novelist, playwright, and screenwriter who is from, by his own admission, the most beautiful city in the world.  I checked out some photos of Chania and cannot say that I disagree.  Ever since I was captivated as a child by Edith HamiIton’s Mythology, Greece has loomed large in my mind as one of the most beautiful, mysterious, and romantic places on earth.  My own visits reinforced the notion, so I was thrilled to get my hands on a modern crime novel and take a glimpse at the country through the eyes of a talented writer.

ATHENIAN BLUES did not disappoint.  Set in Athens during the Greek Crisis, it’s a fantastic novel with an unforgettable pair of protagonists (a Robin Hood-type assassin and a homicide cop who were childhood friends) who probe the underbelly of Athens and shed light on the Greek psyche as they wade through a celebrity murder that just keeps twisting and twisting.  The author’s wit shines through as well. It’s a rollicking good read.

Thanks for taking the time to chat, Pol.  First off, I thought ATHENIAN BLUES was fantastic, and I really hope the series continues.  I was stoked to see the setting, as Greece has always been one of my favorite countries.  Tell me a bit about what part of Greece you’re from and why you chose to write about Athens?

Thank you very much, Layton, I am glad you liked the novel so much. I’m from Chania, Crete—that is, I’m from the most beautiful city of the most beautiful island in Greece, which makes me a pretty lucky guy. For the past few years I have been writing two crime series. The Stratos Gazis series of which ATHENIAN BLUES is the first novel, is the adult one. The second, the “Trilogy of Crete” (not yet available in English) is a Young Adult one. I chose to place the Young Adult one in Chania and the adult one in Athens. I think the reason is that Crete, as a setting, allows the young adult novels to have more “light,” despite what the characters have to go through, and I wanted this to be the case for novels that are read by teenagers (although I was very fortunate to find out that they were read by the teenagers’ parents all over Greece as well!). Whereas Athens, as the capital of Greece, encompasses all the grimness that the country experiences, and I thought this was the proper setting for the adult series. 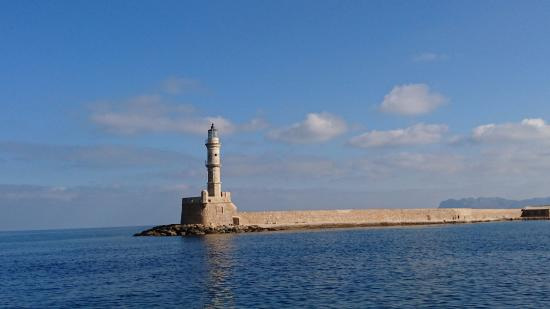 The Chania lighthouse of Crete

Did the economic and political climate spur your desire to write this novel?

I often say that the crisis in Greece is not really economic in its roots—it just turned, inevitably, into one. It is an ethical crisis and is very much caused by the way politics have been perceived in the country for decades—with many people knowingly electing corrupt politicians so that the politicians would help their voters get whatever they wanted, by circumventing the laws and any notion of ethics. So I wanted to write a crime series that would hopefully have at its center very interesting stories (the story is, and always should be, king), but at the same time, it would give me an opportunity to implicitly show some of the innumerable problems that the Greek society has. Crime fiction is, I think, a great way to talk about society, as long as story remains king and you never try to become didactic.

How did you get your start as a writer?  Did you have a “big break”? 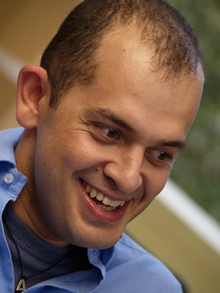 I had a good start–I wouldn’t call it a “big break.” It was 1995, I was 21, and I was watching a talk show on TV discussing the live burning of the Greek flag at a university, with the cameras capturing everything. Some of the guests condemned what was happening, asking for the perpetrators to be arrested because they were burning the symbol of Greece, and others were defending the burning, stating that the young people burning the flag were protesting against the state, not the country. Since everybody (as often is the case in TV) was extremely certain that they were right, I thought that maybe none of these people knew what the hell they were talking about—that maybe one of the students burning the flag was completely apolitical and he was only burning it to get close to another protestor, as part of his scheme to take revenge for the death of his girlfriend. And then I thought that this would be an interesting story to write.

I spent two years writing the novella, which was titled “To Burn a Flag” (I was still a student then, and I had to get my degree, so I was slow!) When I finished it, I thought it was good enough to get published—and that I had nothing to lose even if it didn’t. So I sent it to a few big publishers in Athens, and indeed it got published, got some good reviews and decent sales, and I was too thrilled to ever stop writing afterwards.

Is crime a popular genre in Greece?  How is the genre perceived in the literary community?

Following the worldwide trend, it is becoming more popular. For many years, as was the case abroad, it was considered a second-rate genre, not real literature. But as crime became huge and well-respected abroad, in the past two decades or so, Greece has followed suit and now more and more crime novels are being published every year—either by Greek writers or in translation. I have the feeling that the literary community still doesn’t appreciate crime as much as it should, but things are definitely changing very quickly.

Which crime writers (at home or abroad) have influenced you the most?

Easy question. Although there are many crime and thriller writers whose work I deeply admire, including Raymond Chandler, Ross Macdonald and among the contemporary ones Robert Crais, Dennis Lehane and Harlan Coben, the writer that has influenced me the most is by far Robert B. Parker. 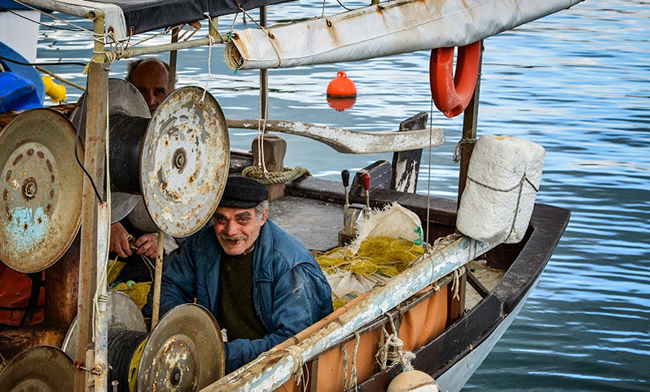 Life in Chania. The city was settled by the Greeks around 1000 BC.

Let’s talk about ATHENIAN BLUES. Again, I really loved the book.  Excellent pacing, unique characters, convoluted plot, and a fantastic sense of place.  How did you come up with the idea? Was there a “Eureka” moment?

Stratos Gazis, the ethical hit man who is the protagonist of ATHENIAN BLUES, came to me almost fully formed, quite a few years ago. Possibly because there were so many things I found unbearable in Greek society that I wanted someone to be able to correct some of the wrongs without being a really “good guy” himself—as he has been brought up in the same society.

Why did you choose a hit man as the principal protagonist? All of your characters operate in a moral gray area, at least according to the law.  Did that interest you more than a classic battle between good and evil?

Yes, and not only because this gray area is where many people operate in, in their daily lives. The greatest problem in Greece, the “root of all evil” in my view is the all-consuming sense of injustice that everyone living in the country experiences. Laws were (and are) seldom enforced, they were just there so that something was written, but depending on who wanted it violated it would very easily be. This left many basically decent people feeling weak and unprotected, which led the best of them to a deep melancholy, and others to find ways to violate the law themselves, so that they wouldn’t be left behind. Hence, a hit man likes Stratos, who only undertakes a job if his research shows him that his target deserves to die, was the proper person to correct various wrongs without being a kind of moral “superhero” that would not fit with the Greek reality. After all, Stratos will only do the job if he gets handsomely paid and he doesn’t care about the morality of his employers.

You’re also a playwright and a screenwriter, which is very impressive.  Do you have a favorite medium in which to write?  How do you compare the three?

They are very different, even though plays and screenplays have some similarities. I don’t have a favorite medium, or rather I don’t have a favorite medium in general—my favorite one is, each time, the medium that I choose in order to tell a particular story. Novels allow you lots of freedom and the ability to build a very broad canvas. Plays allow you to tell very intimate stories, and make the audience laugh or cry at the very moment when they hear your words, which is an unbelievable feeling. Screenplays challenge you to create a whole world in 100 pages. All of them are extremely hard work.

The dialogue is always easiest for me. The most challenging is to convey the atmosphere of all the locations of each story, so that the readers feel like they’re right there.

When I am writing crime novels (which is my main, but not only genre) I try not to read crime. So right now I am reading multiple excellent dramatic and comedic plays, by David Auburn, Donald Margulies, Eric-Emmanuel Schmitt, Nick Payne, Patrick Marber, Rebecca Gilman, Ken Ludwig, and as always, rereading everything that Neil Simon has ever written.

Spend lots of time with my family and friends, play basketball and tennis, watch basketball, tennis, and great stand-up comedy, and read.

Yes. Don’t take any advice! Except one: if you feel the need to write, then read, read, read.

Two new novels. One is the third novel in the Stratos Gazis series (the second novel, Baby Blue, is ready and will be published in 2018). The other is the first novel of a new crime series that I am immensely excited about.

Random question: One of my favorite novels is The Magus by John Fowles, set on a Greek island.  What is your favorite novel (or novels) set in your home country?

The Dance of the Roses by Antonis Sourounis. A truly great novel, which was fortunately recognized as such, winning the National Award in Greece and tons of praise from the literary community and from readers.

To learn more about Pol Koutsakis, please visit his website.