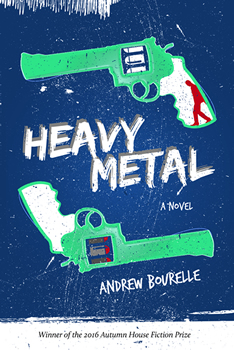 As tense and fast-paced as an episode of Headbanger’s Ball, HEAVY METAL is a gripping, nostalgi- riddled story that urges you to shovel this short book into your eyes. Dealing with family, and mental and societal pressures that we all face, Danny sheds light on the inner thought process of a struggling freshman living in his brother’s shadow.

But first, Danny must overcome Bourelle’s version of the 1980s without the campy TV, heartwarming movies or colorful outfits. Though I grew up in a later decade, this accurately depicts what high school kids were dealing with on some level. We were just punching walls and faces to a different soundtrack.

Here, The Big Thrill chats with Bourelle about getting into character and taking readers on a trip down memory lane.

The protagonist Danny is a depiction of 1980s youth and the book starts with a first person present, angsty voice and a literal gun in his mouth. Did you have to do anything to get into character while writing this, from playing with small firearms or blasting metal on a cassette player?

I tapped mostly into my own experiences: shooting a pistol years ago, listening to hard rock music as a kid (and still today), remembering cold walks on winter days growing up in Ohio. The novel is not autobiographical, but I did grow up in a small town in the 1980s. Setting the story in a familiar world helped me capture the tone. HEAVY METAL actually began as a short story with the same title that was published by the literary journal, Jabberwock Review. When I decided to try writing a novel, I thought there was more of Danny’s story to tell. Writing in his voice felt natural because I was already familiar with the character.

I personally like YA written in first person because as a reader it feels more intimate. Why the choice and was it harder to write here than at arms length?

I was playing around with narrative distance. First-person present-tense narration puts the reader right in the head of the character as the events are happening. So, as you mentioned, it can feel more intimate. But there are times when Danny’s narration has a certain kind of distance. He often tells readers what’s happening without explaining how he feels about it. Sometimes Danny is really in touch with his feelings and other times he’s closed off, not really dealing emotionally with what’s going on in his life. I wanted the narration to mirror his state of mind.

YA is not normally known for cursing or sex. Did you have to edit anything you wanted to keep or tone down scenes to keep inline with the market?

I never gave any thought to how the book would be labeled or marketed. I wanted to write a dark coming-of-age story that would be, in some ways, a character study but also a suspenseful narrative that keeps readers turning pages. I did want the story to resonate with what would be considered a YA audience, but I also wanted readers of any age or generation to be interested in it. This was my first attempt at writing a novel, and so I just wrote the book I wanted to write. I’m perfectly fine with the book being called YA, but I never toned anything down or backed off the adult material. My publisher, Autumn House Press, is a literary publisher, so, for all intents and purposes, the book is labeled a “literary novel.” Literary novel, YA, thriller—I think HEAVY METAL fits into or overlaps with all of these categories.

Why did you choose the 80s?

When I was young, I always loved reading books or watching movies that told coming-of-age stories from other eras: American Graffiti, The Outsiders, Stand By Me (and Stephen King’s novella The Body that the movie is based on). To me, these books and movies capture a nostalgia for a certain time period but tell timeless stories that resonate with any generation. I was more or less the age of Danny in the late 1980s when the novel is set. I wanted to try to write about that time period and create a time capsule that captured the essence of the era—MTV videos, cassette players, jean jackets, landline telephones, and, of course, heavy metal music.

This time period showcases some deep emotional issues and angst. Do you feel teenagers have gotten better or worse over the decades?

That’s hard for me to say. My children are very young, so I don’t have firsthand experience with what teenagers go through these days. But with social media and cyberbullying, it does seem like kids today probably have it even tougher. We live in a world where people don’t hesitate to write whatever cruel thing pops into their head and post it online for the world to see. It wasn’t easy being a teenager in the ‘80s and ‘90s, but I think I would prefer that to growing up today.

This is the first book I’ve read in a long time or maybe ever without quotation marks. Was that a personal or editorial choice?

It was a stylistic choice. I know it’s not common, but there are writers who do it: Cormac McCarthy and Junot Diaz, to name a couple. A strong influence on how I approached the voice of the narrator was the late Frank McCourt’s amazing memoir, Angela’s Ashes. There are a lot of dissimilarities, of course. For one, I’m not nearly as funny as McCourt. But Angela’s Ashes is written in first-person, present tense—a very in-the-moment narration. McCourt doesn’t use quotation marks (or sometimes even commas), and I always thought that was important to the way he is telling the story. He gives readers the story in the form of the thoughts of his young self as they are happening, not from an adult narrator reflecting back on his childhood. In the same way, HEAVY METAL is Danny’s story as it happens to him. Danny wouldn’t think in quotation marks, so I chose not to include them. I think—or hope—that readers get the hang of reading the dialogue after a few pages. 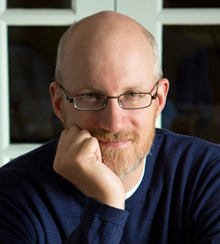 Andrew Bourelle has published short stories widely in literary magazines and fiction anthologies, including THE BEST AMERICAN MYSTERY STORIES. He is the author of the novel HEAVY METAL and the coauthor, with James Patterson, of THE PRETENDER, a BookShot in Patterson’s new line of short thrillers.