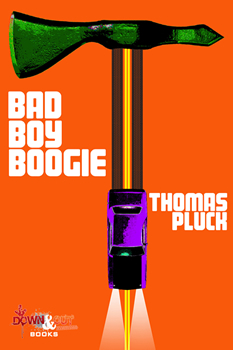 When Jay Desmarteaux steps out of from prison after serving 25 years for murdering a vicious school bully, he tries to follow his convict mentor’s advice: the best revenge is living well.

But questions gnaw at his gut: Where have his folks disappeared to? Why do old friends want him gone? And who wants him dead?

Teaming with his high school sweetheart turned legal Valkyrie, a hulking body shop bodybuilder, and a razor-wielding gentleman’s club house mother, Jay will unravel a tangle of deception all the way back to the bayous where he was born. With an iron-fisted police chief on his tail and a ruthless mob captain at his throat, he’ll need his wits, his fists, and his father’s trusty Vietnam war hatchet to hack his way through a toxic jungle of New Jersey corruption that makes the gator-filled swamps of home feel like the shallow end of the kiddie pool…

The Big Thrill had a chance to catch up with Thomas Pluck to discuss his latest novel, BAD BOY BOOGIE:

If I did my job, they’ll need to take a deep breath and a cold drink. But also, that like INXS says, words are weapons sharper than knives, and bullies and abusers exist because we tolerate their behavior in our midst.

It combines the pace of an action thriller with the classic story of twisted roots of the past clawing their way into the present, as in a Greg Iles or James Lee Burke novel.

James Lee Burke’s lyrical prose, the unflinching cold depictions of the street by Andrew Vachss, and the chilling darkness inside the human heart revealed in Hilary Davidson’s work have all influenced this book, and all my work. 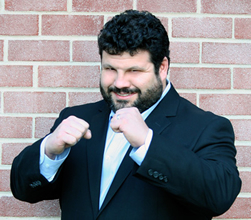 Thomas Pluck has slung hash, worked on the docks, and even swept the Guggenheim museum—though not as part of a clever heist. He hails from Nutley, New Jersey, also home to criminal masterminds Martha Stewart and Richard Blake, but he has so far evaded capture. When not writing, he trains in Kachin Bando mixed martial arts and powerlifting. He resides in the Garden State with his sassy Louisiana wife and their two cats.