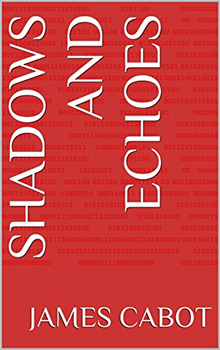 The first book in the RISING SUN triptych, a science fiction historical thriller. An unearthly / mysterious / sinister and beautiful time traveler crosses paths and clashes with an American secret agent in the days before the sneak attack on Pearl Harbor. A tale of intrigue, romance, deception, and betrayal. An epic journey revealing great secrets both international and intimate. The RISING SUN trilogy is three complete novels, almost three hundred thousand words, and took thirty-five years to complete. The RISING SUN trilogy might have an R-rating. Sexual situations and sexual language abound. Readers should be aware that most characters have a casual adult attitude to sex and therefore the depiction of their myriad odd practices can be troublesome & problematic for some.

James Cabot recently took some time to discuss Shadows and Echoes with the Big Thrill:

First off, the sheer joy that comes from a lifetime of historical research. Secondly, the sorrow that goes along with that discovery. For example, many situations in the novel were war crimes and it is with great regret I must report that almost all of them went unpunished. Too many of these crimes are even now unknown to the global public. There were so many culprits. Lastly, a sense of all of the espionage that went on by so many different parties back then should caution us about what goes on today. Do you trust your smart phone and your government? How about election results? Ah well. Lastly, I hope readers will recognize that any and all discrepancies in factual consistency are related to the innate inaccuracies of intelligence gathering, not failures with continuity on my part. No spy ever gets it completely accurate and that’s why espionage is and will always remain the second oldest profession.

First off, by having 290,000 words at my disposal, I was able to really delve deep into my characters and their interactions. Over the course of Sullivan’s seventy-five days’ journey, we travel from Berlin, London, and Vienna to Washington and Hawaii, Mount Fuji and Shanghai, and deep into the Japanese-occupied territories in the South Pacific. Secondly, our companions on the trip include FDR, Winston Churchill, Adolf Hitler, Heinrich Himmler, Magda Goebbels, a young Ian Fleming and an even younger Kim Philby, all of whom will have their most intimate secrets revealed. Some of those secrets may be surprising to contemporary POVs.

Yes, I took many liberties with the story. At times while writing these novels, I became worrying that I was being too cynical and too harsh and thus unfair by depicting politicians and military leaders drunkenly cavorting with prostitutes. That those scenes seemed too silly, too ridiculous, too infantile. And then in my final stages of assembling the text, a scandal broke in the United Kingdom involving the deputy speaker of Britain’s unelected House of Lords, after a tabloid newspaper released a video showing him semi-naked and snorting white powder through a banknote while partying with two women. The BBC wrote on 26 July 2015, “Lord Sewel is facing a police inquiry after quitting as House of Lords deputy speaker over a video allegedly showing him taking drugs with prostitutes…. The footage showed (the 69-year-old man naked and) snorting powder from a woman’s breasts with a £5 note… In the footage, Lord Sewel – who is shown wearing a wedding ring – also discusses the Lords’ allowances system.” The following day more photos of Lord Sewel appeared in The Sun. The 69-year-old man was seated, reading a newspaper and smoking a cigarette, and wearing one of the prostitute’s leather jacket and her blood-orange lacy push-up brassiere on his gray hairy bare chest. Prostitution and espionage are kissing cousins. Six hundred years ago the great Desiderius Erasmus wrote, “Whether a party can have much success without a woman present I must ask others to decide, but one thing is certain, no party is any fun unless seasoned with folly.” He also wrote, “The highest form of bliss is living with a certain degree of folly.”

What triggered this story? Discovering that a second attack was made on Pearl Harbor naval bases at the start of the war. Known internally as K?-Sakusen, Operation K was a Japanese naval operation, beginning 2 March 1942, four months after the surprise attack on Pearl Harbor on 7 December 1941, intended as a reconnaissance of Pearl Harbor and disruption of repair and salvage operations. The attack was carried out by two Kawanishi H8K “Emily” flying boats from the Marshall Island. Their attack, lasting nearly 36 hours and covering more than 4,750 miles, was unsuccessful (because of cloud cover over Pearl Harbor) and ended on 4 March 1942. The two pilots dropped their bombs, but missed their targets. In addition, the flight was never tracked let alone intercepted by US Naval forces even though America had already broken the Japanese wartime codes. The flight of Operation K was the longest distance ever undertaken by a two-plane bombing mission, and the longest bombing sortie ever planned without fighter escort. Then I took my liberties with the story.

James Cabot is a retired university teacher. But that’s not his real name. In reality he has been published through New York & foreign publishers. One of his books was even made into a movie. He is using a pen name for purely alphabet reasons, to move ahead in the publishing world. Plus he’s a bit embarrassed that the manuscript took 35 years to complete.