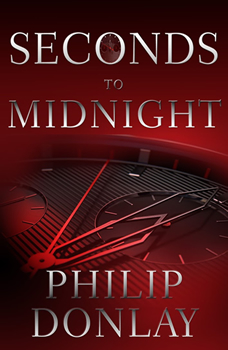 They say “write what you know.”  Philip Donlay takes this a bit further.  “Write what you’re passionate about.”  He’s been flying since he was 16, jets since he turned 20. Google tells us that if he started today at the age of 20, he’d be one of the youngest jet pilots in the world. But he started years ago and spent the ensuing time piloting almost anything with a jet engine—big-to-small—around the world.

When Donlay writes about flying, be it a jet, fixed or rotary wing plane, he knows what he’s doing. And if he describes a place like the frozen Canadian lake near Manitoba—featured in SECONDS TO MIDNIGHT—which is less than five hundred miles south of the Arctic Circle, he has likely been there, smelled the air and caught fish in the lake.

SECONDS TO MIDNIGHT could have been inspired by the headlines in January’s news. And that’s where our conversation started.

“Did you know that scientists who control the Doomsday Clock just moved the countdown to potential global catastrophe 30 seconds closer to midnight?” Donlay asked.

“A group of Atomic Scientist cited Donald Trump and Russian actions and moved it from three minutes to two-and-a-half. That’s the closest the clock has been to midnight since 1952.”

“Yikes. That’s the kind of thing that could keep you up at night just like SECONDS TO MIDNIGHT will.”

“Funny how that happens. My main goal in writing is to entertain more than enough to keep readers up past their bedtime.”

There are seven books in the Donovan Nash series. Your lead male character reminds me of a kinder, gentler, James Bond.

Except that he’s married to a strong woman, Lauren. Thrillers have a shortage of strong women and I wanted Donovan to be part of a team. Although different from Donovan’s, her problem solving skills are formidable, which gives me more opportunity for subtle conflict and contrast beyond the main theme of the book.

I understand why someone might think Donovan is a little like a private sector Bond. He’s rich. He’s handsome. His company Eco-Watch works for the public good. In my mind, he’s is more damaged than Bond. Donovan is good at saving the world. But not so good at some of his relationships, though in his defense, he’s usually he’s too busy trying to stay alive.

SECONDS TO MIDNIGHT starts in the Canadian wilderness then bounces between Eastern Europe, Iceland and Canada. Have you been to all the places in your books?

Most of them. Having been there helps with authenticity. If you are reading about Donovan or Lauren standing on a corner in a major European city odds are good that I’ve stood on that corner.

How did you make the transition from the glamorous life of an international pilot with the lives of the rich and famous people in your hands to life of a writer?

Writing is the only thing I’ve found that is almost as rewarding as piloting jets. I’ve always been a reader. In college, I wrote a magazine article and mailed it in. A little while later I got a check in the mail. Based on that experience, I figured writing for money would be easy.  Write. Send it off.  Get paid. Simple in the mind of an 18 year old. So, I make a promise to myself to write a novel one day, thinking “how hard is it to write a book?” Of course, I’ve since learned it’s not easy at all.

Do you write every day?

During the summer when I write the rough draft of a new book, I write perhaps six days a week.  I get a break as agents and editors take a look, but I’m fairly relentless until the book is finished.

I’m typically in Montana, so I write in the morning for about four hours. Usually I stop when I’ve reached a good place to pick up the thread the next day.  Then maybe I’ll go fly fishing, and then its happy hour, and I’m off to meet friends for dinner.

It’s wonderful that the entire series is family friendly.

When I started on the first book, Category Five, I wanted my young son to be able to read what I wrote. So, no “F bombs,” and no swearing. There’s romance but no sex. I strongly believe that pacing and action can more than take the place of swearing and X rated scenes. SECONDS TO MIDNIGHT is only three days, real time, from beginning to end and Code Black is only six hours from beginning to climax. There’s plenty of time for action but no time to waste.

In CODE BLACK the action starts with the very first sentence.

I learned from reading bestselling authors like Cussler and Crichton to “Go big or go home.”

No one has ever said my books were lacking in drama or action. Great likeable, heroic characters, action, and intricate pacing.  That’s my recipe for a page turner.

Philip Donlay’s travels have taken him to over 40 countries on five continents. His passions—flying and writing—have led to seven Donovan Nash novels: Category Five, Code Black, Zero Separation, Deadly Echoes, Aftershock, Pegasus Down and his newest, SECONDS TO MIDNIGHT to be published in March. He splits his time between Montana and the Pacific Northwest. 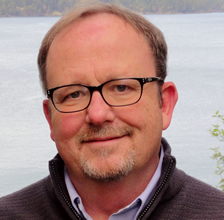 Philip Donlay learned to fly at age seventeen and was first published at eighteen. In the aviation world, success came quickly and he’s been flying jets since he was twenty years old. Whether flying a Saudi sheik, nighttime freight, or executives of a Fortune 500 company, Donlay has logged over six million miles while spanning the globe. Donlay burst onto the literary scene in 2004 with the publication of his first novel, Category Five, followed by Code Black, Zero Separation, Deadly Echoes, Aftershock, Pegasus Down, and Seconds to Midnight. He is an avid fly fisherman and divides his time between Montana and the Pacific Northwest.