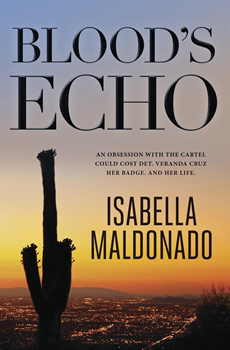 I’m so excited to interview Isabella Maldonado for the Debut Author Spotlight. She’s a former police captain, and the only thing more awesome than a badass female character is a badass female in real life. BLOOD’S ECHO is about a police detective who heads up an elite task force, and the authenticity of Maldonado’s protagonist is apparent on every page. A fine start to an exciting new series.

Congratulations on BLOOD’S ECHO! Can you tell us a bit about your journey to publication?

My journey is a bit unconventional. After 22 years in law enforcement, I gave up my gun and high-tech boots in favor of a computer. I loved reading crime fiction, but my heart’s desire was to write. To learn the art and craft, I joined Sisters in Crime, attended workshops, and pored over countless books on writing. I also wrote three published short stories to try different styles. After four years of serious study, I felt ready for a novel. The next eight months were fascinating, grueling and educational. When I finished my manuscript, I had the opportunity to pitch it to the acquiring editor for Midnight Ink, who was appearing at a conference in Phoenix. Shortly thereafter, I was offered a three-book deal, and my writing career began in earnest! I have now completed Book 2 in the series, which will be published next year.

As retired law enforcement, you saw things every day in your previous line of work contributed greatly to this novel, I imagine. Do you share any traits with your detective protagonist, Veranda Cruz? In what ways is she not like you?

Other than being a Latina police officer in a white-male-dominated profession, I’m not much like my protagonist. Veranda is extremely headstrong and single-minded, which makes her a threat to the cartel she’s vowed to destroy. Of course, a powerful international criminal organization won’t tolerate her interference. And they’re just as determined to put a stop to her for good.

Career-wise, Veranda is a detective, whereas I chose to go for advancement and was eventually promoted to the rank of Captain. I could never imagine Veranda in the hot seat at CompStat, fielding questions at a community meeting, or disciplining officers for excessive force. Earlier in my career, I was a hostage negotiator, and I can’t picture Veranda doing that effectively either. She’s action-oriented.

Tell us about your writing process. How long did it take you to finish BLOOD’S ECHO? Do you have a writing schedule? Is this your first completed novel? How many drafts did you have to do, and was any special research outside your own personal experiences in law enforcement required?

It took approximately eight months to complete BLOOD’S ECHO. However, I was also serving as president of the Sisters in Crime Desert Sleuths Chapter in Phoenix, which took up a good deal of time. BLOOD’S ECHO was my first completed (or attempted) novel. I write almost every weekday beginning in the morning and usually finish in the early afternoon. Because of other commitments, however, this can go out the window at a moment’s notice. I’m an outliner, but I’ve learned that an outline is merely a starting point from which I inevitably deviate. I’m also very visual, so I chart the scenes on a poster board using color codes. Seeing an overview of the arc of the story is very helpful to avoid any weak spots or lulls.

Going back a little further, what led you to a career in law enforcement?

When I attended university, I planned to study law and become an attorney. I did an internship at a local law firm (now defunct) that specialized in criminal defense work. The research was mind-numbingly boring, the senior partners were egomaniacs and mercenaries, and the atmosphere was toxic. While I loved criminal law, I couldn’t possibly work in such a place. I floundered for a while after graduating, then one day it dawned on me that I could practice law in a more direct way. Turned out to be a great decision. My family was shocked at first, but came around to the idea.

You moved to Arizona after you retired from law enforcement, and you set your work in Phoenix. Is it hard to write about a different locale than the one in which you served? Is there any blowback from active police in the area?

I deliberately set out to write about an agency other than the one I worked in. I felt it was important to distance myself from my subject. I chose Phoenix for several reasons, the most important being that it’s a large urban department with less coverage in crime fiction. I love stories set in New York, LA, Chicago, DC and Miami, but wanted to give readers a different vibe and flavor. Phoenix is the perfect place to showcase Latino culture as well. Veranda’s large, loving, sometimes interfering, Mexican-American family gets pulled into the wild ride.

Fascinated by the desert climate and its unique challenges for police, I sought to capture the daunting feel of July in Phoenix for readers. Members of the PPD (a progressive department with thousands of officers) have been generous with their time and access, which helps me keep details accurate. Because I’m a fellow LEO, they know I won’t expose sensitive information or misrepresent them due to lack of understanding.

You mentioned you wrote short stories as a way to learn more about writing. Do you plan to continue writing short fiction?

I do. Ideas for short stories pop into my head at odd times when I least expect it. The short form is fun to experiment with, and offers an opportunity to try new things. For example, the first short story I wrote was in first person POV. The second was in third person and was also my first attempt at comedy. My third had multiple POV’s, and included humorous elements with a super dark plot. In the future, I may use short fiction to try other genres. 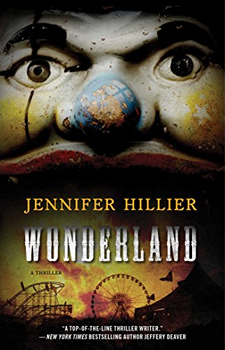 What has surprised you the most about the publishing industry? Is there anything you wish you had done differently?

I am constantly trying to figure out what’s going on in the publishing industry. For a new author, it’s challenging to know in what direction to aim your writing career. The advent of digital media has put everything in a state of flux. Some readers like the feel of a physical book in their hands, while others only read eBooks. Still others never read at all, but listen to dozens of audiobooks annually. I do believe, however, that there will always be an audience for a ripping good yarn. In fact, I’m counting on it.

Which writers have influenced your work the most? What’s your favorite book?

For decades, I devoured anything Stephen King wrote. His prodigious talent hooked me at a young age and inspired me to write. Now that I’m an author, I appreciate the haunting beauty of his prose and his flawless execution. His book, On Writing, was the first I read when I decided to take the plunge.

In the police procedural genre, Michael Connelly is a favorite. Harry Bosch is so fully realized that I expect to find him sitting at a desk in the LAPD. I loved how well Connelly researched his stories. In fact, his depiction of behind-the-scenes LAPD inspired me to show great depth and detail when writing about the Phoenix PD. I want to give my readers the same vicarious experience of being steeped in a particular agency’s culture.

The Thrill Begins is a site geared for debut and aspiring novelists. If you had one piece of advice to pass along, what would it be?

Make a commitment. Set a deadline. Announce it to people around you. Write it down on an index card and put it next to your computer. Drive to the finish line. Leave nothing on the field.

What will you be working on next?

I’ve just completed Book 2 in the series and sent it off to my publisher. Throughout 2017, I’ll be working on edits to get the second book ready for publication while I write Book 3. I’m also outlining another completely different story to begin a new series. Busy, busy, busy…but living the dream!

Isabella Maldonado retired from law enforcement as a Commander of Special Investigations and Forensics. During her long career, she was recognized with a Meritorious Service Award and a Lifesaving Award, and she was selected to attend executive management training at the FBI’s National Academy. Isabella is the immediate past president of the Phoenix chapter of Sisters In Crime. She lives in Mesa, Arizona.

Jennifer Hillier writes about dark, twisted people who do dark, twisted things. She’s the author of the thrillers Creep (2011), Freak (2012), The Butcher (2014), and Wonderland (2015). She loves her husband, her son, her cat Kobe, Stephen King, and the Seahawks. Not equally, but close. Born and raised in Toronto, she currently lives in the Seattle area with her family.