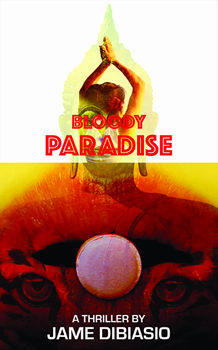 Jame DiBiasio is an American journalist and author who moved to Hong Kong twenty years ago and has remained in Asia ever since.

His second novel, BLOODY PARADISE, is set in Thailand’s island of Koh Samui, a vacation paradise. His first novel, Gaijin Cowgirl, was located in Japan, and his non-fiction book, The Story of Angkor, focused on the famous monuments and temples near Siem Reap, Cambodia.

We interviewed him by email from his home in Hong Kong in January.

Why this setting for BLOODY PARADISE?

Because Koh Samui is fantastic. It’s a beautiful island. Thai food is delicious. You can rent holiday homes cheaply. Thai culture is welcoming, but also different to what many foreigners are used to. Writers devote a lot of creative energy toward imagining their settings, so why not pick a setting I enjoy? That way it’ll be fun for readers who want to come with me.

I have never lived in Thailand, but visit it regularly.

The opening scene has your hero Trav trying to deal with terrible pain as he flees Hong Kong. It reads like something written from personal experience. Where did it come from?

I’ve never fractured a bone, and hope I never do. But I used to practice Thai-style kickboxing, and I have a small idea of how painful that can be. I never could take shin-on-shin blows without pads; it’s excruciating.

Your hero Trav and heroine Mazy are flawed people who have an air of desperation about them in the opening chapters. How did you conjure these characters?

I began with Trav. I wanted a scenario to get this guy truly isolated and unable to leave the island. He had to have everything ripped away. His tragic flaw is that he could have prevented all of it from happening, if he could only exert a little more self-control.

Mazy took longer to create. I was wading into subjects of which I have no personal experience. Her story opens with her meekly subjecting herself to being struck by an abusive boyfriend. But Mazy, despite having many weaknesses, is not weak. I had to work hard at making her sympathetic and, ultimately, heroic.

For both characters, their ultimate barriers are psychological, and one way or another, they see in each other a potential lifeline.

You’re American born and have lived in Hong Kong for twenty years—how did you get to that part of Asia in the first place, and what made you stay there?

I was a cub reporter in New York City, working in financial journalism. My employer had an office in Hong Kong. I was 26. What the hell, right? Hong Kong turned out to offer a lot more opportunity than New York. Later I married a woman born in the city. So while my identity will always be American Hong Kong’s the closest thing to home.

Your first novel, Gaijin Cowgirl, was set in Asia. Tell us about it.

Gaijin is the Japanese word for foreigner. The story is about Val, a beautiful but troubled American who ends up working in a high-end Tokyo hostess club. Her number-one tipper is an old man with sinister hobbies and a map to stolen World War II gold, buried somewhere in Southeast Asia. The story becomes an epic chase adventure as Val tries to get her hands on the gold before the bad guys. It includes a lot of historical background about America’s history in Asia, which gives the book some extra resonance.

How has your long fiction craft evolved between Gaijin Cowgirl and BLOODY PARADISE?

Gaijin Cowgirl has all the ambition – and some of the flaws – of a debut work. It is sweeping, epic, and driven by historical dramas. For a while I attempted more novels in the same vein, but couldn’t pull them off. I finally stopped. When I began BLOODY PARADISE, I deliberately sought a very different kind of story, one that was going to be shorter, simpler, more intimate. Easier. In the end it took me just as long to write, and in some ways it was harder. My writing improved a lot, though. The writing is pacier and crisper in BLOODY PARADISE and that’s just down to experience.

Do you do readings and signings in Asia? If so, what is that like?

There is a literary scene in most Asian countries, but these are in local languages for local readers. The audience for English-language works is limited. There are some pretty big festivals in Asia, but the only one I’ve attended is the Irrawaddy Literal Festival, which is held in Myanmar (Burma).

You’re not going to get a lot of exposure at that sort of event, but there were some pretty big writers there. I did a reading outdoors. Maybe twenty people showed up, including four saffron-robed Buddhist monks.

As I read the first chapter of Gaijin Cowgirl, the translator kept up a streaming commentary for the monks. What was the translator saying? Was he being faithful to my story? Did it have any meaning for these guys? Was it respectful to relate a seedy story to monks? Did they like it? I have no idea, but it was one of those experiences that money can’t buy.

You’re a fan of traditional American hard-boiled novels, and British espionage thrillers. Who is your favorite author and what is your all-time favorite book? And why?

I don’t have one, but here are two guys I identify with.

I like Raymond Chandler because he fuses an all-American noir icon, the private detective Philip Marlowe, with Chandler’s unlikely upbringing in England. Chandler was born in the US but spent most of his early life at a boarding school in the UK. When he returned to the US and settled in California, he felt a little bit of a fish out of water, but he was able to observe his home country in a new way. He heard the way Americans talk differently; like Mark Twain, Chandler developed a very good ear for the American vernacular. But he also brought a certain smoothness and British wit to the party. No one else can ever sound like him.

And I like Hemingway, just because. He’s another Yank who spent a lot of time abroad – the world is peppered with more “Hemingway drank here” bars than the US has “Washington slept here” inns. Lots of people can sound like him – there’s even a software program that helps convert your prose into Hemingwayish. But no one can replicate his soul. 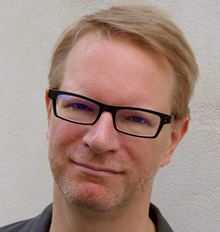 Jame DiBiasio is the author of Bloody Paradise (Water Street Crime) and Gaijin Cowgirl (Crime Wave Press), as well as the non-fiction The Story of Angkor (Silkworm Books). He was born in the US but has lived in Hong Kong since 1997.

To learn more about Jame, please visit his website.