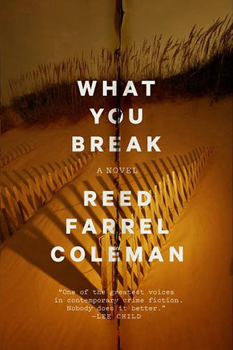 Gus Murphy and his girlfriend, Magdalena, are put in harm’s way when Gus is caught up in the distant aftershocks of heinous crimes committed decades ago in Vietnam and Russia. Gus’s ex-priest pal, Bill Kilkenny, introduces him to a wealthy businessman anxious to have someone look more deeply into the brutal murder of his granddaughter. Though the police already have the girl’s murderer in custody, they have been unable to provide a reason for the killing. The businessman, Spears, offers big incentives if Gus can supply him with what the cops cannot—a motive.

Later that same day, Gus witnesses the execution of a man who has just met with his friend, Slava. As Gus looks into the girl’s murder and tries to protect Slava from the executioner’s bullet, he must navigate a minefield populated by hostile cops, street gangs, and a Russian mercenary who will stop at nothing to do his master’s bidding. But in trying to solve the girl’s murder and save his friend, Gus may be opening a door into a past that was best left forgotten. Can he fix the damage done, or is it true that what you break you own . . . forever?

Author Reed Farrel Coleman recently spoke with The Big Thrill about his latest thriller, WHAT YOU BREAK:

A sense that they’ve read a realistic and exciting crime novel that makes them think about the weight of grief and the price we all pay for violent crime.

That’s for readers and critics to decide. I just write the books and hope they have some impact.

I discover something new about myself, the world, and writing every time I sit down at my computer.

That I learned about the towns in Long Island’s Suffolk County by driving a home heating oil delivery truck for seven years.

I am influenced by everything I read or have read. When I stop being influenced, it will be time to quit. But my favorite authors include Raymond Chandler, Hammett, Vonnegut, Daniel Woodrell, Dennis Lehane, Philip Kerr, Lawrence Block, Peter Spiegelman, Megan Abbott, SJ Rozan and a hundred others.

“Coleman writes some of the best prose in modern crime fiction.”
— Booklist

“The novel ends with a series of stunning set pieces that are sure to be echoes, just as they echo THE GODFATHER.”
— Booklist

Called a hardboiled poet by NPR‘s Maureen Corrigan and the “noir poet laureate” in the Huffington Post, Reed Farrel Coleman is the New York Times Bestselling author of the Robert B. Parker Jesse Stone series and the author of the Gus Murphy series for GP Putnam’s Sons. The first Gus Murphy novel, Where It Hurts was named one of 2016’s Ten Best by the Washington Post. Reed is a three-time Shamus Award winner for Best PI Novel and a three-time Edgar Award nominee in three different categories. He lives with his family on Long Island.