The Fatal Lure of the Serial Killer 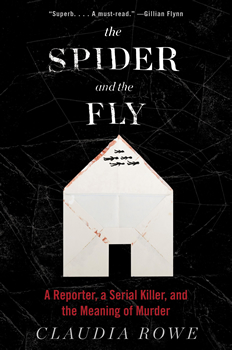 In 1998, reporter Claudia Rowe was living in small-town Poughkeepsie, New York, working as a stringer for the New York Times, when she began writing about a series of gruesome murders committed by a local man named Kendall Francois.

Unsatisfied with police reports and victim statements, Rowe reached out to Francois in prison, sparking a four-year relationship that by Rowe’s own admission transformed from professional curiosity into an obsession that could have been dangerous.

It saved her instead.

The more Rowe delved into the mind of the murderer, the more she realized the story was about much more than her search for answers to questions about the human psyche and the makings of a killer—it was a way to dissect, process, and overcome the personal demons of her own abusive and violent past.

“Kendall Francois became the embodiment of all my ghosts,” she says. “Blame is a natural response to horror. And it’s momentarily satisfying—but it doesn’t move the needle. It doesn’t get us any further. How we come to understand and work with our past dictates our future.”

For Rowe, that meant going deeper. Finding the strength to look beyond what repulsed and repelled her.

And at its core, that’s the message Rowe hopes readers take away from her book based on this relationship with Francois, THE SPIDER AND THE FLY. Part psychological thriller, part memoir, Rowe’s provocative narrative forces you to explore and find compassion for the complexity of the human condition.

But this enlightened perspective didn’t come without a price. During the four-year span of her obsession with Francois, convicted of murdering eight women, Rowe’s personal sacrifices began to mount. At the height of her fixation, Rowe’s then-boyfriend left. She lost her house, her friends. Even that, coupled with the growing concern—and disgust—from family and peers, wasn’t enough to cull Rowe’s frantic chase.

“I was consumed with getting in Kendall’s head,” she says. “His brain was like a forest and I was walking through it with a flashlight. Sometimes the true awfulness of what he’d done would come to me in flashes and rise up like a wave. But then it would recede. I was unwilling to stop.”

In part, perhaps, because Rowe didn’t realize at the time what she was looking for, but also because Francois wasn’t willing to let go, either. His letters became more intimate, their phone calls more frequent, and his requests for personal information about Rowe more persuasive and aggressive.

The book is written with far more intimacy than Rowe ever shared with Francois. It’s raw, honest, compelling and staggeringly beautiful, if not morbidly fascinating—but, of course on the surface, their relationship isn’t all that uncommon.

“A lot of people become obsessed with true crime as a way of processing their own trauma,” Rowe says. “And there’s something inherently mysterious about the notion that anyone around you could be a serial killer, that they could exist in the shadow world. I wanted to know if you could recognize it. If you could sense it on a person.”

Rowe quickly learned that the answers to those questions are far more complex than the simple equation she envisioned, and looking back, she recognizes that her fascination with the case—the gruesome, but somewhat unremarkable rise of a small-town serial killer—was based on the idea that sometimes you can miss what’s right in front of you.

“There are a million things I could have put in this book,” she says. “But I chose a few key scenes that demonstrate how I came to be the one to write it. It’s a memoir of a time, not my whole life—which means the details are very specific and narrow.”

Which unfortunately, puts it at great risk of being misunderstood.

True crime lovers may balk at the lack of information on Francois’ actual crimes, and lovers of psychological suspense may be confused by the narrative’s more atmospheric vibe. But basing it on either of these attributes alone does this remarkable book a true disservice.

THE SPIDER AND THE FLY won’t reveal much more than you probably already know about the serial killer known as Kendall Francois, but it will force you to take a harder look at yourself, and at humanity as a whole.

It may even convince you to push away that which repulses you—and look deeper.