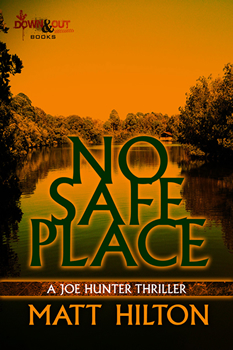 Who does Andrew Clayton turn to for help when his wife has been murdered, his child is in danger, and the police think he is responsible?

Despite his mistrust of Clayton, Joe Hunter accepts the job of protecting young Cole. But who is he protecting the boy from? And why?

It’s clear Clayton knows more about his wife’s killer, but he isn’t saying. And when his silence places Cole in the killer’s sights there’s…no safe place.

Author Matt Hilton recently shared some insight into his latest novel, NO SAFE PLACE, with The Big Thrill:

I hope readers will enjoy a more thoughtful and logical Joe Hunter than the reckless vigilante he was in previous books, to enjoy the lengths he goes to in solving the mystery of Ella Clayton’s murder, and how far he’ll go to protect a vulnerable child.

It shows the maturing of the Joe Hunter character and how previous actions can come back to not only haunt but change a person for the better.

During the writing of NO SAFE PLACE, I found that I enjoyed writing the scenes where Hunter interacts awkwardly with Cole, a young boy he must protect. Prior Hunter books have been all action, so taking time to establish Hunter’s character through these interactions was hugely gratifying to me as a writer.

NO SAFE PLACE finds a troubled Joe Hunter recovering from a previous job that has left him shaken by the violent events, who takes on a supposedly easy job of protecting a child after his mother was killed during a home invasion robbery. Through protecting the boy, Hunter rediscovers himself, perhaps even a better version of the man he once was.

I grew up reading the men’s action books popular in the 1970s, and first began writing my own pastiches or versions of the characters I most enjoyed — Mack Bolan (Don Pendleton), Remo Williams (Richard Sapir and Warren Murphy), Conan the Cimmerian (Robert E Howard) — and later began reading and emulating styles reminiscent of David Morrell, Dean Koontz, and Robert Crais.

“I cannot recommend this book strongly enough and I’m already counting the days until I can get my next fix of Joe Hunter as NO SAFE PLACE is a marvellously tense and dramatic novel which challenges both reader and character.” — Crimesquad.com 5-star review 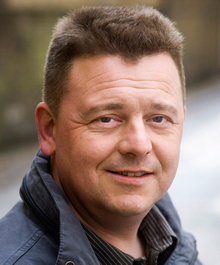 Matt Hilton quit his career as a police officer with Cumbria Constabulary to pursue his love of writing tight, cinematic American-style thrillers. He is the author of the high-octane Joe Hunter thriller series. His first book, Dead Men’s Dust, was shortlisted for the International Thriller Writers’ Debut Book of 2009 Award, and was a Sunday Times bestseller, also being named as a ‘thriller of the year 2009’ by The Daily Telegraph. Dead Men’s Dust was also a top ten Kindle bestseller in 2013. The Joe Hunter series has been translated into German, Italian, Romanian, and Bulgarian.

Matt is a high-ranking martial artist and has been a detective and private security specialist, all of which lend an authenticity to the action scenes in his books.