Search for Evil in the Eternal City 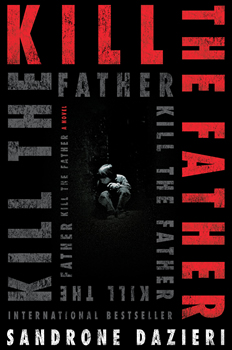 I just finished an ARC (advance reading copy) of a stunning novel, KILL THE FATHER, by Italian crime writer Sandrone Dazieri, the bestselling author of eight novels and more than 50 screenplays.  Already a huge hit in Europe, KILL THE FATHER will be available in the States by the time this article is published.  For all you lovers of Italy and Rome, and I know you are legion, the novel provides fascinating insights into the Eternal City.  It also introduces two compelling protganists: Deputy Captain Colomba Caselli, a tough cop reeling from her last case, and the indelible Dante Torre, a man who, due to his imprisonment in a concrete silo as a child, acquired extraordinary powers of observation.  Called “dazzling” by Publisher’s Weekly and “a dark treat for mystery buffs” by Kirkus, it is the first of a planned trilogy, I’ll be eagerly awaiting the final two works.

Thanks for chatting with us, Sandrone.  We’re “thrilled” to have you.  I thought your novel was truly amazing, by the way.  Before we talk about that, can you tell us a bit about your background?  Where did you grow up?

Thank you. I was born in 1964 in Cremona, a small town of 50,000 inhabitants in the heart of Northern Italy, surrounded by grain fields, the same city that I put into the darkest chapters of Kill the Father. At 14, I decided that I wanted to know the world better and I began to travel the country: first studying how to cook, then working as a chef. I arrived in Milan in my early twenties and I stayed there.

When did you know you wanted to be a writer?

Since my childhood. I remember I was watching an episode of an old British TV show, “Jason King,” about a novelist, and I realized that was the job I wanted to do as an adult. I used to read a lot and books were my best friends. It was a natural choice.

Long and tortuous. After I stopped being a chef, I tried many jobs (electrician, bouncer, porter …) until I landed in a magazine as proofreader. After a few years I became an editor and I started writing reviews of detective novels and science fiction. When I thought I knew enough, I wrote my first novel. It was called “Beware of the Gorilla” and it was about a detective with a split personality called “Gorilla.” I sent it to three publishers, one responded, and we are still together 16 years later.

I’m curious about crime novels in Italy–is the genre as widely read as it is in the U.S.?

Detective novels are beloved in Italy but, unlike in the United States, the most common are written in a manner that is called “classic French,” in the style of Simenon’s Maigret. Rather boring, in my opinion, and above all, too reassuring. Fortunately, some people write good thrillers.

As I said, I loved KILL THE FATHER.  It’s a masterful piece of writing on so many levels: pace, plot, setting, twists, and most of all, character.  How did you come up with the dual protagonists who investigate the boy’s disappearance? 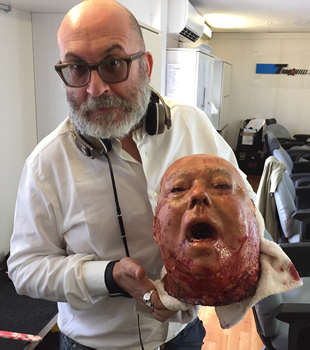 Thanks again. One day, walking through the fields around my home town, I saw a silo that stood in the middle of nowhere. I thought that no matter what happened there, no one would ever know. For example, someone could have been a prisoner in that silo … In that moment the character of Dante Torre was born, an abducted child who lived locked up for eleven years, with only his captor for company, and who would become, as an adult, an exceptional hunter of missing persons and a very troubled man. A character so outside the box he needed a less extreme counterpart. Who better than a cop? A cop with a very limited view of the world, very wary of the oddities of Mr. Torre: Colomba Caselli.

In your mind, do either of your detectives have a fictional “lineage”?  I know Dante is not an actual police officer or investigator, but there are definitely shades of Sherlock Holmes….

I truly can’t remember any particular influences that led to Colomba, unless she is based on some real women who I’ve had the good fortune to know and, in one case, to marry. Dante, however, has many historical fathers. Certainly, it is impossible to imagine a brilliant amateur detective without thinking about Holmes, but the character of Dante is primarily influenced by the fiction of Philip K. Dick and William Burroughs. Dante is constantly altered by drugs, alcohol and the manifestations of his own phobias, but through his hallucinations he always manages to glimpse the truth.

One of my favorite parts of KILL THE FATHER was reading about Rome.  I’m curious; has the “eternal city” changed much during your lifetime?

In half a century, Rome has changed less than one might expect. Of course, new neighborhoods have sprung up, and new roads and new museums have been built, but a short-sighted time traveler would struggle to notice the differences. Keep in mind, though, I’m not a Roman. I began to really go regularly to that city a dozen years ago, for work. I must say that, as much as I love the place, I would not live there. It is a very complex city, and you must be born there to understand her. 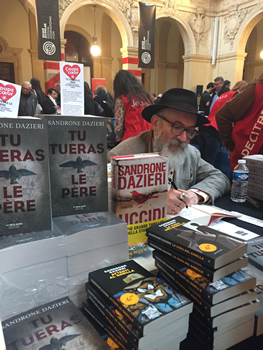 What advice would you pass on to budding novelists?

The only advice I can give is: try to figure out if writing is really what you need. If you aren’t a genius, the path that leads to writing something decent, and then getting it published, is long and painful, full of disappointments and delusions. Writing means learning to be alone in a world that is, by contrast, increasingly connected. It means isolating yourself and spend most of your time inside your brain. I wouldn’t recommend it to anyone, but if you love the risk … welcome. J

How do you compare writing novels to screenplays?  Is one harder than the other in terms of forging a career?

Writing a screenplay is much more technical than writing a novel. It allows the screenwriter to focus more on the narrative flow and the juxtaposition of scenes. Writing a novel, conversely, involves fewer predefined roads.  It requires a higher degree of immersion, as well as better writing skills. As for which career is harder, I don’t know. I’m a former chef as well as a writer and I’ve gotten by in both professions. And if I can do it, anyone with a hint of talent can do it. Unfortunately, talent, even in small doses, is a rare commodity.

The Fireman by Joe Hill.

In Italy I’ve just published THE ANGEL, which is the sequel to KILL THE FATHER, and now I’m writing the last and final novel of the trilogy. For 2018 I have a few ideas in mind …

To learn more about Sandrone Dazieri, please visit his website.