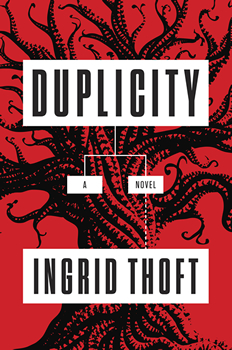 Fina Ludlow is a Boston detective who debuted in Loyalty, then starred in Identity and Brutality, which won the Shamus Award for the best private investigator novel.

The Cleveland Plain Dealer describes the series as, “Sexy, modern noir… [with] a new generation kick-ass heroine” while the Associated Press said, “One could imagine Fina becoming fast friends and colleagues with Sara Paretsky’s V.I. Warshawski, Sue Grafton’s Kinsey Millhone and Laura Lippman’s Tess Monaghan.” That last bit is funny, since Sara Paretsky is the one who presented that Shamus Award to Thoft at Bouchercon.

The latest novel, DUPLICITY, kicks off when a mother hires Fina’s firm to go after a hip new church, one that she claims brainwashed her daughter. Things only get worse from there, with the death of a prominent church member and the investigation turning complex and explosive, forcing her to face the true meaning of faith.

Thoft now lives in Seattle but grew up in Boston, making the setting completely natural and easy. The detective part wasn’t natural or easy, so she graduated from the University of Washington with a certificate in private investigation.

What do you hope readers take from DUPLICITY?

My top priority is always providing readers with a “good read.” I want them to close the book with a sense of satisfaction, having been engaged and entertained. In DUPLICITY, in particular, I would be thrilled if the themes of faith and loyalty prompt readers to reflect even just a little on their own allegiances. Fina is forced to grapple with the questions of what and who she believes in, and also, how best to respect those whose belief systems are so very different from her own.

As I was writing the book, it struck that in a time of enormous dissent and disagreement in our country, these are questions with which we are all forced to contend.

What authors influenced you?

Although my reading choices are eclectic, as a writer, I’ve been most influenced by writers in the mystery and thriller genres including Sue Grafton, Elizabeth George, the late Robert Parker, Sara Paretsky, P.D. James, Ace Atkins, C.J. Box, and Reed Farrel Coleman. These writers have created intriguing main characters that develop and change over time. They are unique, but also relatable—a tricky combination. I’m always anxious for the next installment in their series—as a writer and a reader.

What’s the appeal of Fina Ludlow as a protagonist?

My main character, Fina Ludlow, is three-dimensional and fully fleshed out, and I think this is one of the main reasons she resonates with readers.

Not only an investigator, Fina is a daughter, sister, aunt, and friend, and those pieces of her identity play a crucial role in her behavior and in the choices she makes. Fina’s attempts (and occasional failures) at navigating relationships and balancing competing interests are relatable to most readers. 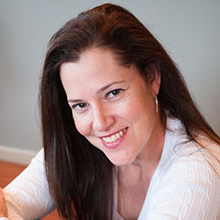 Born in Boston, Massachusetts, Ingrid Thoft is the author of the critically acclaimed Fina Ludlow series. LOYALTY, IDENTITY, BRUTALITY, and DUPLICITY (January 2017) feature the Boston private investigator who tangles with the city’s criminal element and her family of personal injury attorneys. The series has been called “sizzling” by Entertainment Weekly and “dazzling” by Publishers Weekly. BRUTALITY won the Shamus Award for Best P.I. Novel. LOYALTY was nominated for the Shamus Award for best debut P.I. novel and received the Spotted Owl Award for best debut mystery by a Pacific Northwest writer. Ingrid earned a certificate in private investigation from the University of Washington in her quest to create a believable private investigator character and is also a graduate of Wellesley College. Ingrid lives in Seattle with her husband and is a member of Seattle7Writers, a collective of Pacific Northwest authors whose mission is to foster and support passion for the written word.

To learn more about Ingrid, please visit her website.