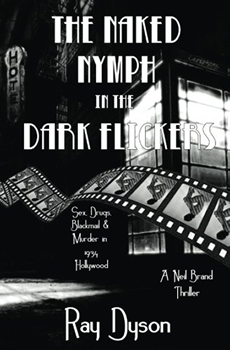 Hollywood 1931. A place where bulls interrogate frails, and dewdroppers hang around waiting for their big break. A place where finishing a movie can take precedent over blackmail or even murder. These are some of the challenges that face film studio security chief Neil Brand, ex-cop and former stuntman, in Ray Dyson’s THE NAKED NYMPH IN THE DARK FLICKERS. This hard-boiled crime story is a dazzling mix of noir and Hollywood history, told with the gritty light and shade of a classic black-and-white motion picture.

Ray Dyson studied journalism at Ohio State University and spent many years as a newspaperman, covering crime and sports. I’ve met many thriller authors who began their writing careers in journalism. So that was where I started a spirited conversation with Dyson for The Big Thrill.

How did working as a crime journalist help your approach to crime fiction?

A good reporter must be a good observer. Those two things go hand-in-hand for investigative reporters. The same is certainly true—and to a far greater extent—for criminal investigators. There isn’t a homicide dick in the world worth a lick if he isn’t a first-class observer. Those boys understand a crime is solved by paying attention to the details. I’ve spent a great deal of time watching them at work—or at least exploring the details of those efforts—developing a good understanding of how they go about their duties. It can be a slow, painstaking affair as they work to crack a tough case, but when you talk to them afterward it can be fascinating to learn how they put the puzzle together. Hopefully, that carries over to my stories.

What writing influences inspired you to continue the tradition of hard-boiled crime stories?

I was about to start high school when my family moved to a new home and I found a Perry Mason book by Erle Stanley Gardner, The Case of the Empty Tin. It hooked me, and I began to devour all the Gardner books—especially the Mason series. That naturally led me to the other great Black Mask writers. I loved Dashiell Hammett for his ability to create a scene with strong, sparse writing. He was a former private detective and his stories had a strong sense of reality. Raymond Chandler, one critic said, wrote like a slumming angel, telling poetic tales of desperate people caught up in harsh events. James Cain and Cornell Woolrich drew rich portraits of ordinary people trapped by their desires and by their flaws, and sometimes simply by circumstances. These writers laid down the ground rules for hard-boiled crime stories of the 1920s and 30s, with real characters committing real crimes. They wrote about the people and times with an authentic voice. I hope that in my little way I can continue the crime adventures begun by these wonderful writers.

I’m a pushover for intriguing titles. I read that Raymond Chandler left behind a list of unused titles, for example The Black-Eyed Blonde, which reminded me of your first Neil Brand book, The Ice Cream Blonde. What comes first for you? The title or the story?

The Ice Cream Blonde is a title I had running around in my head for some time. I got the idea from the real-life and still mysterious 1935 death of an actress known in her day as the Ice Cream Blonde. I thought it made a wonderful title and I constructed a completely fictional story around her death. As for THE NAKED NYMPH IN THE DARK FLICKERS, I was well into the story when the title struck me from dialogue spoken by one of the main characters. So, sometimes the title comes first, sometimes the story. I have a story in mind for my next effort and so far the title hasn’t come out of the darkness. Perhaps I’ll be clever enough to have someone say something that makes the title.

Your attention to detail about Hollywood in the 1930s indicates not only a ton of research but also a love for the films of that period. When did you first get interested in film history?

I can’t remember not being interested in history. At first, American history. But as I got more into that I gravitated toward military, the Old West and, as it became easier to find and watch movies from the 20s and 30s, film history. Those old films fascinated me and I wanted to learn more about the actors, the people behind the scenes, and the studio system—how it came to be and how it flourished. A portion of THE NAKED NYMPH IN THE DARK FLICKERS looks at the making of movies during that time period and how the studio controlled—or attempted to control—the lives of its major players, and the lengths those studios would go to protect themselves and their human property. The true story of Hollywood is a gold mine for any writer. The murder of a Hollywood director in 1922 inspired THE NAKED NYMPH. However, the story around the events is purely fictional. I hope to have more Neil Brand adventures and I expect each will have its foundation in some true event.

Author Erle Stanley Gardner makes a cameo appearance in THE NAKED NYMPH. Would you consider giving him—or other real life characters—a larger role in another story?

In doing research for THE NAKED NYMPH, I came across a photo of Gardner’s black Mercedes. I thought it would be fun for Brand to meet Gardner on the film lot and they would talk about the car: a piece of business to help flesh out Brand. In both books I mention a lot of actors and actresses of the time, but only in passing. It’s possible that in the future the fictional use of real life characters might be enlarged. It could be fun having Jimmy Stewart or Katharine Hepburn help Neil Brand solve a murder.

Ray Dyson first took up eating in Evansville, IN, just long enough ago that, not only is the house he was born in no longer there, neither is the street. He attended The Ohio State University School of Journalism and spent several years as a newspaperman, covering crime and sports. He is a former sports editor and sports columnist, and now lives in Mansfield, OH, with his wife, Pamela, where he works as a freelance journalist. He has a particular interest in American history (especially the Civil War), the American West, and the American cinema.

Dyson is the author of three other books: a baseball story, Smokey Joe; a Western novel, Bannon: The Scavenger Breed, and his the first Neil Brand crime story, set in Hollywood in 1931, The Ice Cream Blonde (Black Opal Books 2016).