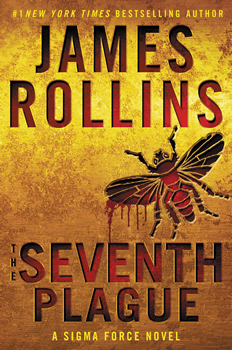 Wise advice for all authors, perhaps, but a strict code by which James Rollins writes. For a guy that pens at least two novels a year that are rife with death and mayhem, that isn’t nearly as easy as it sounds.

Rollins lives by this same creed when writing the page-turning action for which the New York Times bestselling author is known. And after more than a dozen novels in his Sigma Force series alone, finding a balance between breakneck pacing and character development can still be a delicate process.

“You can’t just have action for the sake of action,” Rollins says. “I always look for ways of tweaking the action in a different way. You don’t want to exhaust your reader.”

It should come as no shock then that THE SEVENTH PLAGUE, Rollins’ sixteenth story in the Sigma Force collection, is a breathtaking race through time and history in an effort to answer a harrowing question: If the biblical plagues of Egypt truly happened, could they happen again—on a global scale?

When the leader of a British archeologist expedition is found murdered and an autopsy report reveals that his body had begun to mummify—while he was still alive—his remains are sent to London for further study. But back in Egypt, the medical team in charge of the autopsy has fallen ill to a strange disease that is quickly spreading across Cairo. The situation is dire—and most alarming—because the archeologist had vanished while searching for proof of the ten plagues of Moses.

To unravel a secret that goes back millennia and stop a global crisis, the Sigma Force team must confront an ancient threat that is made more dangerous—and deadly—by modern science. A threat that could very well decimate mankind forever.

But the long-standing heroes of Sigma Force are more than simple “men of action.” THE SEVENTH PLAGUE continues Rollins’ tradition of creating compelling characters that demand an emotional response from the reader.

“If I’m going to dangle a character over a cliff, the reader has to be invested,” Rollins says. “They need a good reason to hang in there and finish the story.” 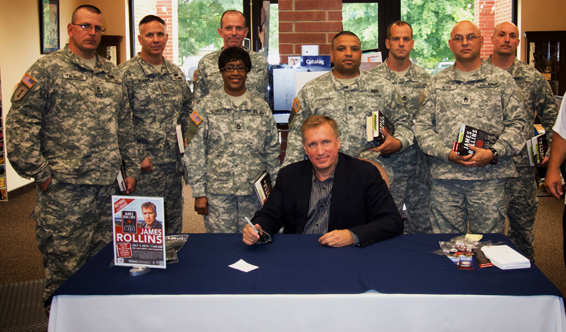 Which is often more important than the mystery itself. Thanks to advanced technology and the ever-expanding world wide web, Rollins says it’s easier than ever for people to access the research and science information that informs his storytelling. And the crux of that is that facts—scientific or historic—can, and often are, disputed. It’s becoming increasingly more difficult for readers to simply “suspend disbelief.”

“Once upon a time it was easy to pull the wool over a reader’s eyes,” he says. “People are wiser now. It forces me to be a better magician. I don’t have a strong political bent in my novels. I just try to present a different theory and hope that I entertain the reader, and that they can suspend that disbelief.”

To increase the odds of that, Rollins peppers in “specificity”—the details and facts that create authentic moments throughout the novel. For each book, he maintains a strict research routine that puts restrictions on his time so he can carve out those three to five double spaced pages a day. But it’s easy to see how Rollins might be tempted to fall down the research rabbit hole. On top of a healthy relationship with the Google’s search engine, Rollins subscribes to more than 30 print publications, and admits he’s addicted to the History and Discovery channels. 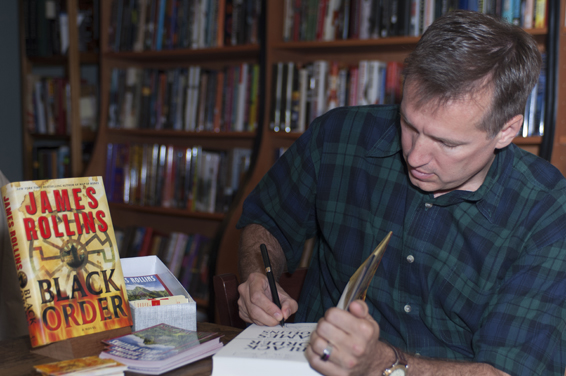 It also helps that Rollins is a bit of a thrill seeker himself.

He started his career as a full-time veterinarian, then shifted to writing after several successful novels. He also had dreams of being an archeologist. That fantasy may—for now—only be acted out in his fiction, but Rollins enjoys hiking, kayaking, close encounters with bears, and travelling—particularly to some of the interesting places he’s taken his characters.

“By the time I finish writing a novel, I want to travel there,” he says. “My goal is to visit at least all of the continents once. I’m almost there—damn you, Antarctica!”

Perhaps now that he’s no longer chained to his desk writing or co-writing three books a year, Rollins will be able to explore some of that unknown territory, and go back to “getting in trouble” like that one time in Australia when he inadvertently swam with a 12-foot crocodile. While his co-writing projects are temporarily on hold, but that doesn’t mean he won’t re-visit them in the future, nor does it mean his James Clemens alter-ego won’t be resurrected at some point. For now, he’ll focus on two Rollins books a year—a Sigma Force instalment, and whatever else keeps his creative juices flowing.

And as Rollins continues to dredge up new mysteries to twist into page-turning tales of suspense, his Sigma Force characters continue to amass fans not just in the literary world, but in Hollywood as well. The series was optioned by Lionsgate, and a first script was penned by the same writer as the Black Panther movie. Good news for sure, but as Rollins is quick to point out, the Hollywood machine chugs at a much slower pace. 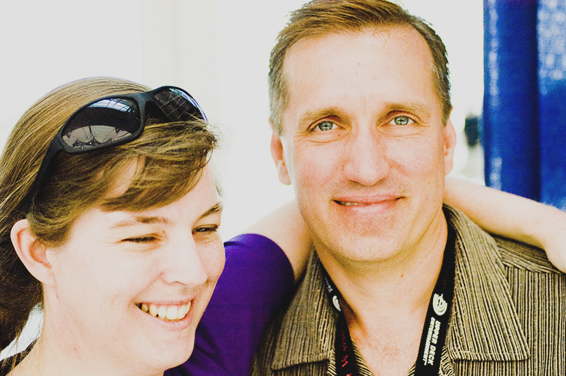 “I’ve got a few other irons in the fire,” he says. Including a for now top secret TV show he and an independent producer are soon pitching to HBO. “It’s a fun project—a unique idea.”

And a shining example that there are many ways for writers to tell a story these days.

“It’s true that it’s harder to get your foot in the door with a traditional New York publisher,” he says. “But there will always be an innate human desire to hear stories. My advice is to keep plugging. Forty-nine different agents rejected me. It’s an exciting time to be a writer.”

It’s also an exciting time to be a fan of Rollins and his Sigma Force team—THE SEVENTH PLAGUE is one of his best.

The December 2016 Edition of The Big Thrill