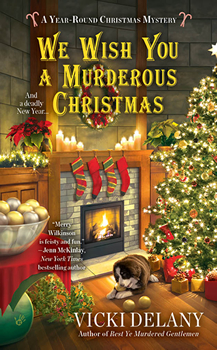 Holiday-themed murder mysteries have long been popular with readers. The magic of the season coupled with the nostalgia of favorite rituals contrast with criminal behavior and evil intent. Vicki Delany’s newest novel, WE WISH YOU A MURDEROUS CHRISTMAS, is a suspenseful and charming addition to this sub-genre. The novel is set in the fictional town of Rudolph, New York, where Christmastime is a year-long occurrence and even yuletide cheer is no deterrent to murder.

Delany recently sat down with The Big Thrill to share more about her latest novel and her prolific writing career.

Congratulations on the publication of WE WISH YOU A MURDEROUS CHRISTMAS. No spoilers, but what can you tell us about your book that we won’t find in the jacket copy or the PR material?

Christmas celebrations in Rudolph are threatened by a forecast of melting temperatures and icy rain, and Merry Wilkinson, the protagonist, makes a decision about her love life.

Nothing but a good time! WE WISH YOU A MURDEROUS CHRISTMAS is a holiday cozy, and intended to bring a spark of laughter into the reader’s life. No serious topics, no psychological insights, no emotional trauma—just a fun read with a great setting and entertaining characters, for people who like a bit of mayhem and murder in their holiday festivities. And don’t we all, sometimes?

I created an entire rationale as to why Rudolph, New York, reinvented itself as Christmas Town. And what the neighboring town of Muddle Harbor has done to try to combat the success of their (supposed) rival. I just had fun with this book: Christmas is, in many ways, a rather silly time isn’t it?

Library Journal called Merry Wilkinson, your protagonist and the shop owner of Mrs. Claus’s Treasures, “an appealing amateur sleuth.” Can you tell us a little more about Merry Wilkinson and some of the elements of her past that have made her the woman she is today?

Merry was born and raised in Rudolph, New York, which calls itself America’s Christmas Town, daughter of Noel, the town’s official “Santa Claus.” She left the small town for the bright lights of New York City and got a job as a design editor with a top lifestyle magazine. The dream ended when her fiancé dumped her to marry the magazine owner’s daughter, and Merry came back to Rudolph. She opened a shop called Mrs. Claus’s Treasures, specializing in locally-made décor and holiday decorations. She loves being back in Rudolph, reconnecting with her best friend, and owning her own business. She cares very much about the town, about the people, and the Christmas spirit, so when murder happens she can’t help getting involved.

What do you think is the appeal of the cozy subgenre?

I think people enjoy simply getting away from some of the tragedy and angst of the world and connecting with characters they can relate to and going to places they’d love to visit.  Yes, cozies are about a murder, but ultimately they are about friendship and community. The murdered person is rarely likeable (often even a stranger in town), never part of a larger plot (terrorism or organized crime or a serial killer), and their death doesn’t result in tragedy, fear, or despair for the rest of the characters. Cozies are true “puzzle mysteries” in which the author matches wits with the reader to see who can reach the conclusion first. Cozies are pure entertainment.

You’re the author of multiple popular mystery series as well as novellas and several stand-alone novels. Please share with us a little about your writing journey.

I began my career writing standalone psychological suspense for Poisoned Pen Press. My first novel was Scare the Light Away which came out in 2005, followed by Burden of Memory, and then the Constable Molly Smith series, set in a small town in the Interior of British Columbia, of which there are now eight books. (The latest was Unreasonable Doubt.) I consider myself very, very lucky to have started my career with PPP, and to have been able to do other projects at the same time. The Klondike Gold Rush series for Dundurn Press and a series of Rapid Reads novellas for Orca, two cozy series for Penguin, and the forthcoming Sherlock Holmes Bookshop and Emporium series for Crooked Lane. I love venturing into different subgenres of crime writing and am lucky to have had a range of publishers willing to let me do that.

When I started writing I was working full time as a systems analyst for a bank and I had three children at home. Writing was pretty much a Sunday afternoon affair. It took me four years to write my first book. My first two books were published, and the third written, while I was working, but the children were growing up so I was able to write in the evenings. I took early retirement and left the bank, and from then on my writing schedule has been firm. Every morning, every day of the year when I am at home (perhaps not if I have company), from nine-ish for three to five hours.

Read. As Stephen King has said: if you want to be a writer you have to do two things. You have to write and you have to read. Reading is how we learn our craft and how we continue to learn. Good writing should inspire you.

With that in mind, what authors or books have influenced your career as a writer, and why?

I came to reading crime fiction when I heard Sara Paretsky being interviewed on CBC radio about how she wanted to write a book where the women were their own actors, making their own decisions. I’ve read mysteries ever since. I read a lot of different subgenres (and I write in different subgenres also: modern gothic suspense, police procedural, historical fiction, even books for adult literary), but I was introduced to cozies by reading Mary Jane Maffini (Victoria Abbott), Kate Carlisle, and Jenn McKinley. I am the past chair of the Crime Writers of Canada, and I’ve gotten to know and read so many wonderful Canadian mystery writers. I am a strong believer that to be a good writer you have to read and read widely. Good writing inspires me.

In the summer out on the deck. In the winter, I stand at the half-wall between the kitchen and dining room. I love writing standing up, it’s good physically and good, I’ve found, for creativity. I have a small computer totally dedicated to writing novels, and nothing else. I’ve never set up email or Facebook or anything but Word. I need that physical space between my writing and all the social media distractions.

What can readers look forward to next?

In March, Crooked Lane will be releasing the first in the Sherlock Holmes Bookshop and Emporium mysteries, Elementary, She Read. I am very excited about this series; it’s been so much fun to write. It’s a cozy, but with a little bit of an edge as the main character isn’t your standard cozy protagonist. 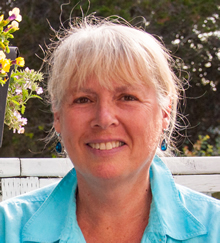 Vicki Delany is one of Canada’s most prolific and varied crime writers, author of more than twenty published crime novels, including standalone Gothic thrillers, and the Constable Molly Smith series from Poisoned Pen Press and the Year Round Christmas Mysteries from Penguin Random House.

Under the pen name of Eva Gates she is the national bestselling author of the Lighthouse Library cozy series from Penguin Random House, set in a historic lighthouse on the Outer Banks of North Carolina.

Vicki lives in Prince Edward County, Ontario. She is the current president of the Crime Writers of Canada.