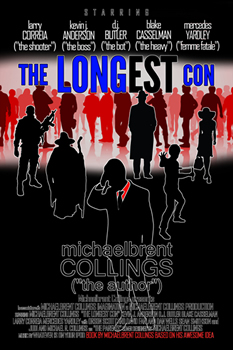 International best-selling author, dad and all around awesome guy MichaelBrent Collings has just done it again.  He’s written THE LONGEST CON, and his latest novel is a phenomenal read.  Tip: If you aren’t already a Michaelbrent Collings fan, do yourself a favor and read a book or two of his today.  Definitely worth your while.

Tell me about THE LONGEST CON?

Well, we all know that people go to comic cons to cosplay as monsters, but what most people don’t know is that monsters also go to comic cons to cosplay as people. Obviously, this presents a lot of problems since monsters plus people in close quarters equals carnage. The con organizers’ solution is to seed “Wardens”—the equivalent of undercover Air Marshals—throughout the cons. These Wardens are in charge of stopping problems before they happen, or cleaning up the bodies and punishing the killers after.

The fun part of it is that I’m the main character of the book: the Warden tasked with solving the murder of a high-ranking monster whose death could set off an apocalypse. And other very popular and successful writers—including Larry Correia, Kevin J. Anderson, Orson Scott Card, and more—are also major characters. Some are wizards, some are supernatural weapons dealers, some are even weirder. All of the authors in the book gave permission for me to make great characters out of them, and they all enjoyed it.  And, so far, the readers seem to be enjoying it as well.

When did you start writing? What got you interested in the craft?

I started writing very young. My father was the head of Creative Writing at a major university, so books and words—both to be read and to be written—were a part of my DNA. The first time I wrote something, I was four years old (I started reading very early), and it was a “story” that was four sentences long and written in red crayon. My father read it, put on his teacher hat, and talked to me about the good parts, how I could make it better, and what to do next. Being a great author, I took his editing notes in stride and radically overhauled my parrot opus, creating an epic that was now five sentences long, and which debuted to rave reviews from my mommy.  Thus a writer was born.

Why horror? What about the genre piqued your interest?

Horror is a wonderful genre. A lot of people’s concept of horror is essentially the feeling they got the last time they saw a poster for a horror movie: “Horror? That’s the grungy genre with evil things chasing and then killing/chopping up/eating large-breasted women, right?” And, to be fair, there are a lot of horror novels (and movies) that do just that.

However, horror can also be much, much more. Horror, at its best, is the most moral, uplifting, redemptive genre in the world. It is one of the few genres where you can address enormous, metaphysical questions. Sci-fi, fantasy, even mainstream thrillers can’t talk about questions of life and death in the same way as horror: after all, if a demon possesses a little girl, and a priest arrives to save her, we must necessarily address issues of whether there is a God, of life after death, of the reason (if any) we are alive in the first place.

You mentioned in your bio that you want to develop a super power. What would be your top two favorite super powers and why?

Top two favorite superpowers? Well, obviously, my first would be the power to change anything I touch into a Red Vine. Mostly because then if someone gave me a Twizzler, I could transmute it to something not designed by Satan himself. Red Vines aren’t my favorite thing in the world, by any means, but would I use up one of my superhero slots to rid the world of Twizzlers (patent pending by The Dark Prince)? Absolutely.

As for my other power, I would want the power to show other people how truly talented, capable, and wonderful they are. I know this sounds cheesy, but it’s true. And, quite honestly, it’s largely selfish: I think if everyone in the world had a real grasp of their inherent potential, the greatness locked inside them, then we would see a rapid decrease in wars or even interpersonal misunderstandings. So much of what we do wrong as a species hinges on our own secret fears that others who are stronger or smarter or just “better” will come to wipe us out of existence, either physically or culturally or both. If more of us (and I include myself in the “us”) really understood our magnificence, I think we would stop fearing so much, and also be more willing to conclude that others have their own majesty and value worth preserving.  Also, people would probably be wise enough to reject Twizzlers of their own accord, thus negating the need for my first superpower.

What do you like to do for fun? Are you an avid reader?

I’ll answer these in reverse order: I am an avid reader, but my reading habits have changed a lot since I became a father (four kids, from pre-teen to toddler). Now, you can tell exactly what books I’m reading by going into my bathroom—aka, “My Tiny Office With a Lock”—and checking out what’s on top of my toilet tank. The load-bearing limit of the porcelain is the only limit on the number of volumes I may be cycling through—I have a lot of random interests—but the bathroom is where I do most of my reading these days, since it’s one of the few remaining areas where my kids don’t turn everything into a team sport.

As for what I like to do for fun: I’m a writer and a dad and a husband. Who has time for “fun”?  Okay, that’s a bit of an exaggeration. I do enjoy watching movies, playing video games, martial arts, and a few other things when I have the time. But mostly it’s writing (which is fun, now I think about it) and being with my family. Also very fun, when I’m not trying to resist murdering someone … CLEAN THE GUINEA PIG CAGE.  I’VE TOLD YOU A THOUSAND TIMES AND YOUR ROOM IS BECOMING AN OSHA-CERTIFIED NIGHTMARE AND DON’T YOU GIVE ME THAT LOOK, MISTER.

I hear you have a story coming out in an anthology? Where/when should fans expect it?

The anthology is called Windows Into Hell, and it’s actually available for presale on Amazon right now. The anthology is based on a book called A Short Stay in Hell, which is about a man who dies and is sentenced to wander the book stacks of a library in which every letter of the alphabet is used in every possible combination in a near-infinitude of books. His sentence will end when he finds the one book that exactly tells the story of his life with no typos and no mistakes—among a library whose volumes outnumber the sum of all atoms in the universe.

If this book sounds very strange, it is. But it’s also evocative, exciting, funny, thought-provoking, and thoroughly wonderful. I hope my little riff on the story—entitled “A Very Personal Hell”—does justice to the book.

Tell me a bit about yourself.

Husband. Dad. Writer. Hater of Twizzlers. That kind of captures it, I think.

If you really want more: I love a good pot roast. The ocean scares me. I am not afraid of clowns, but I do think Congress should probably look into whether they’re a good idea. I believe that maple syrup is good, but almond syrup is better. I am deeply in love with my wife, and constantly worry that one day she’ll realize how much more she brings to the relationship than I do. I think anyone willing to eat bone-in buffalo wings deserves exactly what they get (yes, that’s ambiguous… just ponder it a while). I was once recruited to be a spy (really!). I am fairly sure that our current election cycle is really a prolonged marketing campaign for the next Suicide Squad movie. And, last but not least, I am constantly amazed at what people can do.

I hear you make awesome waffles, is it true?

Yes. But do not ask me the secrets, for they are held deep within the Iron Mountain, and they may only be accessed by two people who both hold the proper key cards and can recite the entire opening scene of Monty Python and the Holy Grail in perfect unison. Many have tried to break into the Sacred Waffle Place, but all have failed… and all those who have failed now weep and cry out in a place of dark madness where even the Elder Gods fear to tread.

What does this year hold for you? What’s next?

This year holds a lot of work, which is a good thing. I’m working on a screenplay about a haunted apartment complex, then after that I’ve got several sequels (including one for THE LONGEST CON) to map out. And coming up next is Halloween, and my kids are going to rock it!

THANK YOU SO MUCH. Seriously. As much as writing is a fun thing for me, it’s also a job, and I can’t do that job without the support of lots of people. Each person who buys a book is buying food for my family, is paying for the roof over our heads, is making sure my kids have clothes to wear. Every one of my readers is an integral part of my life, and I can’t thank them enough for that. So please, keep reading, and I’ll do my best to make the words worth your time! 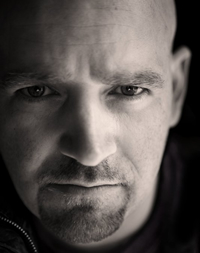 Michaelbrent Collings is an internationally-bestselling author, multiple Bram Stoker Award winner, and one of the top indie horror writers in the U.S. He is also a produced screenwriter and member of the Writers Guild of America.