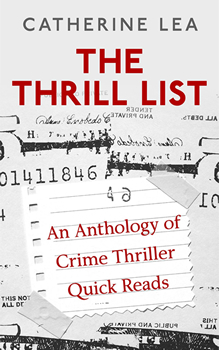 Any fan of thrillers knows the appeal of a ticking clock. And it’s typical for an author to write one book a year, and for that book to get published in six months to a year.

Not the case with this anthology, the brainchild of New Zealand writer Catherine Lea, who recruited 11 other authors for the project.

“The whole process—including compilation, finding a suitable cover, formatting, tweaking, etc.—was completed within a two-and-a-half week period, during which I also designed the landing with links through to four retailers,” Lea said.

What made you think of these specific authors for the collection, and how do the stories work together as a theme?

I initially reached out to authors I knew, then some I didn’t know but knew of. I’m so fortunate to have enlisted authors who not only cover a variety of sub-genres but who also keen to suggest other thriller authors who might be interested as well. It also helped that everyone who came on board was keen to see the project succeed, and brought in suggestions to get it up and running.

Is there something different about short stories and anthologies vs novels that made you want to do this?

One of the major considerations was the fact that I wanted the final collection to be free. It’s a marketing tool for everyone who contributed. Because I didn’t want to be responsible for payment of royalties to other authors, I included a clause in the contract which states that in the event of the book attracting any royalties while waiting to be price matched, those royalties would be put towards advertising and marketing costs. I’ve tried to be very transparent in this regard. These are friends and fellow authors who have put their trust in me. That trust is important to me.

When, where and how was this project born—and why did it come together so fast?

For an indie author, marketing and writing are ideally prioritized in equal proportions. For a while now, I’ve been investigating various advertising and marketing techniques I’d seen other authors finding success with, and I’d recently embarked on a course in Facebook advertising. Although Facebook ads seemed to work in the early stages, I became frustrated when apparently successful campaigns would suddenly hit a wall for no apparent reason and a lack of transparency made analyzing the results difficult.

One thing I did take away from my experience to date, however, was the need to build a dedicated fan base. Not exactly news to many, but in the past, building such a base was always done organically and came about very slowly. All the latest techniques sped up the process, and these days you need to be ahead of the crowd just to stay on your feet.

I’d been watching a young author who had put together a box set of fantasy authors, including some big names. Her results were fantastic. The box set hit the bestseller lists for The New York Times and USA Today before she launched a new title in her series and independently reached #6 on the NYT Bestseller list. Completely in awe of her, I wrote to her, asking about how she’d achieved her success. She kindly walked me through her project from the beginning right through to the end. I’ll just mention here that this is one of the things I love about the Indie author network. A huge number of very successful people are willing to share their experiences. I believe It’s one of the reasons e-book marketing has come so far.

Why should readers pick up a collection of short stories, and why should writers participate in one?

This is a fantastic way to get new readers for authors, and for readers to find authors they may not have heard of. It usually starts with a reader picking up an anthology or a box set that includes an author they currently follow, and being able to dip into other stories without making any great commitment in either time or money.

We’ve got some exciting authors who don’t normally write short stories who have turned out some cracker reads. We’re also thrilled to have included authors renowned and awarded for their short stories. And at the price point, the readers can’t lose.

Ha! That compiling a list of authors into one collection looks easier than it is. But it’s also been terrific fun, and I’ve discovered a couple of authors I’ll be following from now on. I’ve also discovered how generous and supportive authors are. I’ve approached people who barely know me and they’ve put their faith in me to get this book out. I’m so grateful to them. I’ve also discovered how much tinkering my website will take before it freezes on me. Which, I have to say, was a little less fun.

Would you do it again, and if so, what might the next anthology cover?

Wow, good question. At the moment I’m very happy with what we’ve achieved with this one. I’d love to do a box set of thriller writers. But perhaps I’d give it a little longer than two-and-a-half weeks to complete.

Many of the authors already had short stories they were able to offer. Mark Bastable had two, then had this wild idea he’d been tossing around. He plotted and wrote his contribution in two days—beautiful clean copy, fantastic story. I can’t wait for readers to get hold of it.