Everyone has a hobby, some people collect death. 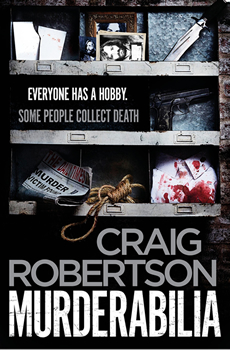 Craig Robertson owns a handwritten letter from the Moors Murderer, Ian Brady. He also recently purchased a piece of the fireplace in Cielo Drive, LA, in front of which Sharon Tate and three friends were murdered by members of the Manson Family. Oh, and he bought a lock of Charles Manson’s hair.

You could say Robertson takes his book research seriously—to get it right, he has to go actually through the process. So…while writing a novel about people buying murderabilia, he—obviously—had to buy murderabilia.

“It’s not your everyday shopping experience, but then if it was, I wouldn’t have been interested enough to write about it,” he says. “The surprises came in the sheer scale of the business. It is enormous and you can pretty much buy anything if you are prepared to swap your credit card details for your conscience.”

Despite his most recent purchases—all part of the research for his chilling new release, MURDERABILIA—Robertson admits there is one item he’d still like to possess, if scruples and his partner’s objections weren’t an issue, of course: something connected to Jack the Ripper.

“He remains the unholy grail of collectors and there are objects out there,” he says. “Albeit beyond the realm of the surface web.”

It was actually during a search on the dark web for another project that landed Robertson on an article about murderabilia, the practice of collecting items from crime scenes. By the time he finished reading it, he’d axed the original idea and started fresh.

“The subject matter—a thriving marketplace where people buy and sell items related to murder­s—was irresistible,” he says. “Who buys art drawn by serial killers? Who befriends notorious murderers in order to sell their letters or prison clothing? And just how far would someone go to get the ultimate collectible?”

In MURDERABILIA, Robertson’s protagonist Detective Inspector Narey learns all too quickly the answer to that question. When a body is discovered hanging from a train bridge, Narey is assigned to investigate the murder—but also why the victim’s clothes are left neatly on the ground below.

But when she is removed from the case, Tony Winter, police photographer-turned journalist, is tasked with picking up where Narey left off—with potentially deadly consequences for them both.

It’s perhaps the darkest novel in Robertson’s collection, made that much creepier by the stunning cover that is both gorgeous and ghoulish, and depicts exactly what the author wanted to convey—though he’d be hesitant to lean too much on the “dark” label.

“Interestingly, the fewer people I kill off in a book, the darker I’m told the book is,” he says. “The darkness is in the psychology and being able to infect other people’s minds with that. Getting away from it is a trick in itself, but having spent 20 years as a journalist, I learned the importance of compartmentalization and not taking it home with you.”

These days the former journalist calls both Scotland and the U.S. home. Anxious to leave Journalism—an industry he felt was rapidly changing, not always for the better—becoming a full-time author seemed the most logical second career. After all, Robertson had been training for it for some time.

“I’d learned how to meet deadlines, how to write under the pressure of a ticking clock, to research, and how not to waste words and grab your audience early if you’re to have any chance of keeping them,” he says. “The best stories are about people—whether it’s in a newspaper or between the covers of a book. That never changes.”

As for Robertson’s next story he’s wavering between two ideas—the first another installment in his Winter-Narey series set in Glasgow, the other a standalone thriller set in the highlands of Scotland or upstate New York.

Wherever Robertson next takes his readers, it’s probably safe to assume any memorabilia picked up along the way will have slightly less terrifying origins than of a murder scene. 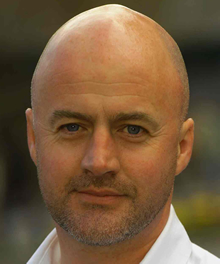 Former journalist Craig Robertson has written six novels set on the mean streets of Glasgow and one on the not-so-mean streets of Torshavn in the Faroe Islands. His debut, Random, was shortlisted for the CWA New Blood Dagger and was a Sunday Times bestseller. Cold Grave reached #2 on Kindle.

To learn more about Craig, please visit his website.