Travel Back in Time…for a Good Reason 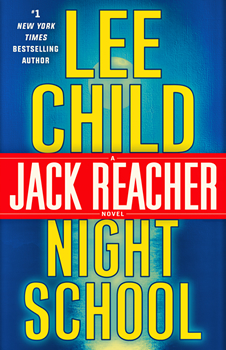 The next Jack Reacher adventure takes the character, and the reader, back to school, NIGHT SCHOOL. Fresh off getting a medal, Reacher gets a new assignment in a special combined task force to track down an American demanding one hundred million dollars, but the big question is: what is this man selling? NIGHT SCHOOL is set in 1996, so get ready for a trip back in time.

In chronological order, NIGHT SCHOOL would be placed between The Enemy and The Affair, then it proceeds to Killing Floor and is a straight shot afterward.  Obviously, the first question that comes to mind is: why take a trip back in time and why the ’90s?

Says Child, “I tend not to have any particular reason for whatever I do. I mean, I sort of do what I feel like doing, and it’s always interesting to people the time when Reacher was still in the Army. I wanted to marry that with the situation that we had 20 years ago in the mid-’90s, when we were experiencing a wave of threat that was new to the world and I tried to capture that feeling, like what you do when you move out of something you understand into something that you don’t understand. Although to me, it doesn’t feel like that long ago, but in terms of security and threats, it is a whole new generation.”

Only a few people now remember the word TELEX, and operators of that antique communication equipment are even harder to find. Meaning the research for this book must have been an adventure in itself.

“The real trick was remembering what we didn’t know then that we know now,” says Child. “During the mid-’90s we heard about the Millennium. That seems like an easy reference, but back then it was a live issue, especially regarding computers. On top of that, the technology was there, but wasn’t exploited as it is now.”

In the novel, Jack Reacher is 35 years old, but looks rougher around the edges, more direct, perhaps even crass. He is the earlier version of the man we now see.

“That’s one of the interesting things doing a prequel. Normally, what you do is advance him a little in every book, making him older, wiser, and more experienced. Now we go for a younger version, one that is maybe dumber, even more naïve or conventional or less sophisticated in the way he handles the situations.”

Working in a prequel defuses the tension somewhat, particularly in the danger level. Reacher can’t die … because he’s alive for the other books. Building tension when the outcome is known is a tricky business.

“In terms of chronology we know he cannot die because he appears in 20 books,” Child says. “I think that in books of this nature, the reader has the implicit understanding that the hero will survive. Instead, I build the tension with the central question of the book, in this ‘What is this about? What is this mysterious American trying to sell?’ And you know that question is asked several times in the story: ‘What is he selling?’ I think that is the thing that builds the suspense. You also have to make sure when you reveal it, that it was worth it.”

In the book Worth Dying For, Reacher commented about never having had his nose broken in a fight. Keeping track of such details is a hard task, one that is bound to cause continuity problems—well, for any writer but Lee Child.

“What happens when you write books with a recurrent character is, that even if I a normal person who can distinguish fantasy from reality, it almost feels like the character is a real person like a brother or a friend. You can keep straight the story, you know all the facts about him, and are in no danger of forgetting, because it is almost like this is a real person you’re talking about.”

As for the storyline of NIGHT SCHOOL, a set of bad guys enters the scene exactly in the middle of the book, which would lead us to believe the author is a plotter rather than a declared pantser.

“I do all completely by instinct,” Child says.  “I never plot it out, I never make a plan. All is done by instinct. I do work in strands and when we reached the middle of this book I thought we needed it to complicate it more, to make it a bit little less linear. I do it all by instinct and I feel it must go in.”

The last third of the book evokes an all-out manhunt, similar to The Day of the Jackal, except this time there are way more parties involved.

“Frederick Forsyth’s Day of the Jackal came out in 1971, and that’s Year Zero to a new style of book grounded in reality and procedure,” says Child.  “And again in Day of the Jackal we knew President Charles De Gaulle was going to survive because we know the history. That’s another example of a story where you know the outcome but it was very tense getting there. His early books were an influence, also Alistair MacLean. In terms of characters I would say the John D. MacDonald and his Travis McGee books. Then of course the main influence of Reacher is in ancient mythology, like the loner, the mysterious stranger who shows up at right time and then just disappears. It’s a very ageless kind of story.”

The novel definitely has the feel of an armored knight riding in to solve problems,  like Don Quixote.

“Exactly. It is a very medieval European concept. The knight that for some reason has been banished or sentenced to ride the land alone in expiation for his transgression and do good deeds where he can. Every culture has that savior.”

Tom Cruise, not a medieval figure to most people, is now appearing on screen in Jack Reacher: Never Go Back, and racking up solid box office.

Child is often called upon to discuss Tom Cruise. “What I hear from people who were not familiar with the book is that he was completely convincing. People who were familiar with the book were very hostile with the idea, but now people have got around to seeing it, I think he convinced them. He kind of owns the role on the screen. The problem with movies is that there is a physical thing with physical locations and people, not animation. You can draw a cartoon the way you want, but this is a real person, an actor. There are not many actors of Jack Reacher’s size, so the question was to find an actor who would understand the internal stuff of Reacher, the personality and vibe so he can use acting skills to put it on the screen. And clearly Tom did it very well. He looks, acts, and thinks like Reacher does.”

Speaking of the first move, we got a glimpse of Lee Child wearing a police uniform and nodding at the famous actor, but alas, no dialogue.  “I have another cameo,” he says. “This time it’s not a whine, more like a grunt. I like the idea of doing a cameo, like Hitchcock did.  I’m not looking to be an actor, it’s just fun.”

“One of the new books is definitely going to be a collection of short stories. I have lot of them from over the years.  I do think in the case of prequels you have to do them sparingly. So guess that all three will be current day.”

He will also edit the new collection from the ITW titled Match Up, which engages a sort of battle of the sexes in terms of both characters and authors participating.

“I was not only the editor but I also wrote a story with Kathy Reichs,” says Child. “But really my job as editor was great. It’s just like playing fantasy football in a way. The idea was to pair up men and women writers, men and women characters. I was really just dreaming up who could participate. And we got some really good people. My job was to put it in a collection form and send it to the publisher.”

When asked for a final comment, Mr. Child dedicated it to the people he considers the most important of all.

“The books are really created by the readers as much as by the authors, so I really want to thank my readers. I’ve learned over the years that there are not great books, but only great readers—and I thank them all!”

October 31 - November 6: "Is tone linked more to the author’s or the character’s attitude?"

A Question of Faith by Mona Karel