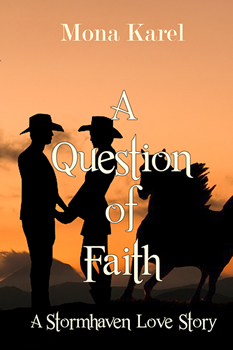 Rosalind Summerton’s life was easy, charmed even—right up to the day she accepted an invitation to visit a family in the Middle East. But when an “up close” cultural experience became too close and Rosalind barely escapes the country alive, she ends up at Stormhaven, a sort of “decompression chamber” for people who have seen too much.

That’s where she meets Tyler Randolph, a rough and tough cowboy whose ex-wife stripped him of more than his truck, trailer, and horse—he’s lost faith in himself and in his ability to judge people. Except Rosalind. He has more than a few thoughts about her.

Author Mona Karel creates a perfect storm of suspense and romance in A QUESTION OF FAITH, the second book in her compelling Stormhaven series. In The Big Thrill this month she reveals insight into this new release, talks about what it’s like to be back in this world, and what her fans can expect from her next.

I love the series title Stormhaven—it conjures up great images of romance and suspense. Please tell us a little about the genesis of this series, and in particular, the inspiration for the second book, A QUESTION OF FAITH.

My original thought was to create a ranch somewhere offering respite for veterans, a place they could go to be understood, where no one would look askance at a missing limb or an occasional reaction to thunder. Or to fireworks. One of the questions Ty asks Adam Roberts in A QUESTION OF FAITH is, “Windows or not?” Meaning, did he need to feel secure, or need to see out. Adam (you’ll see him again in A Question of Trust) needed to feel secure, so smaller windows made him more comfortable; Rosalind needs to see out, since her experiences have made her claustrophobic. For both of them, Stormhaven becomes a place to heal. I actually have two historicals planned—seriously—since, sadly, wounded souls are not a modern entity.

A QUESTION OF FAITH explores what happens when a person who has never met adversity is slapped upside the head by circumstances beyond their control. Rosalind has to deal with physical attacks for the first time, and worries she didn’t stand up well for herself. Sydney (from A Question of Honor) comes back as the perfect foil, and I was able to come up with a clever repartee—a buddy book with women trading quips.

What do you hope readers take away from this book—and, if applicable, this series as a whole?

From A QUESTION OF FAITH: to not let ourselves evaluate a book by the cover. Roz is gorgeous. Tall, willowy, a former underwear model. She’s also earthy, bawdy, compassionate, and so strong she scares most men. She’s learned to live her own life in spite of working in a world that evaluates only the exterior.

From the series: there are so many depths to the people around us that we never truly understand. The man who tosses feed sacks in the back of our truck might well have stormed the beach at Normandy, or slogged through the swamps in Vietnam. We all carry a burden from conflict, either directly, or through someone we care about.

Reviewers have praised your ability to create characters that are not stock romance—it’s sometimes difficult not to fall into that cliché category of perfect heroes and heroines. What is your character building process? Do you find the male or female characters more difficult to develop?

I love it when reviewers understand about not writing boilerplate characters. I don’t know how many times I gagged on female characters bemoaning their long legs and tiny waists and large breasts. Yeah, ick. When it comes to writing characters, all too often the females are more difficult for me. I want to write “spit-in-your-eye-kick-tail” women, when I’ve spent too much of my life pretending to be subservient. I don’t know for sure if I’m writing good male characters; I mostly try to write people I’d like to know.

I took some time to read through your blog, and I enjoyed the posts, noting that they are so personal and relatable. Why is it important to reach out to authors beyond the books you write? Do you have a favorite fan experience?

Sadly, I have few fan experiences. Although I did have a fabulous review from another author, who said A Question of Honor made her believe in heterosexual romance stories again. That’s kind of special, don’t you think? As far as reaching out beyond our books, I think most writers communicate better through their books than face-to-face. Exposing a bit more of ourselves in blogs helps us gain balance in our lives. For me it helped fill that gap of losing my husband (which always seems like such a silly phrase…I didn’t leave him in the power tools department at Home Depot, for pity’s sake!)

It’s clear you are passionate about dogs, food—and The Beatles! How do these passions inspire / inform your work?

I’ve never written about dogs. Strange, since I’ve dedicated much of my life to them, but I write romance, and so far I’m not seeing much romantic in my dog world. Well, except for meeting my future husband at a dog show. Does that count? At the time I was pretty much at the lowest point in my life, and I knew I’d have to really up my game before I would—this sounds so bad—be worthy of him. I did, and years later when we were having our pre-wedding interview with the pastor, I admitted I took one look at him and knew this was the man I was going to marry. He had no idea!

Please share a little about your publishing journey—how you transitioned from writing Beatles fan fiction to having published your third book. Where do you see your career in five years?

In between writing Beatles fan fiction and finishing my first romance manuscript was a lot of years wandering from job to job: stable manager, dog groomer, waitress. Until (at 35) I took a temp job at a nuclear power plant, and discovered material management. For me it was a revelation of how much effort is needed to make things happen. Procurement, expediting, inventory—boring to most of the world, I know. I loved it. I also loved not having to wreck my back and hands lifting big dogs into the tub! Those years brought me in touch with people I would not have met otherwise, all of whom make up the fabric of my stories.

In five years? I hope to have many more books under my belt. Some suspense, some fantasy, but all of them in some way showing the price paid when heroes stand between danger, and those they care about. A five-book fantasy series keeps calling out to me.

There’s a third Stormhaven book on the near horizon—A Question of Trust. What can you tell us about that? Do you envision more books in the series?

When I wrote A Question of Honor, I portrayed Sydney’s sister Lana without conscience. After a while, I started asking myself why. Why did Lana do what she did, or what people thought she did? Everyone has reasons for how they act even if those reasons don’t make sense to the rest of the world. Then Adam Roberts walked into Ty’s house, limping a bit because his prosthetic is bothering him and run down from everything he’s been through, and I knew this very special man deserved a very special woman. Once they both learn to trust themselves and each other…

There is at least one more Stormhaven book planned, involving the rich neighbor and a woman who accepted the blame years ago for something she didn’t do. That will be A Question of Truth.

Maybe, to take a chance on a new author? 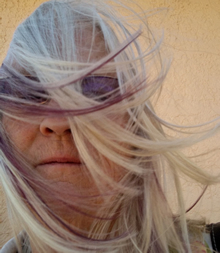 Mona Karel is the writing alter ego of Monica Stoner, who wrote Beatles fan fiction and terribly earnest (read just not very good) Gothics in her teen years. She set aside writing while working with horses and dogs all over the US, until she discovered used book stores and Silhouette Romances. Shortly after that she also discovered jobs that paid her for more than her ability to do a good scissors finish on a terrier, and moved into the “real” working world. Right around then she wrote her first full length book. It only took her twenty seven years after that to be published, and not that book! She writes looking out the window at the high plains of New Mexico, with her Saluki dogs sprawled at her feet. Distraction much?? Sometimes these silly dogs take over her life, but there is always room for one more set of characters in one more book