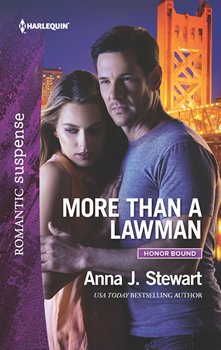 Haunted by the death of her childhood friend, journalist Eden St. Claire has dedicated her life to catching serial killers—and she’s always done so alone. But when the lethal murderer Eden is tracking puts her in danger’s crosshairs, she agrees to accept protection from longtime friend, Detective Cole Delaney.

Cole has secretly carried a torch for Eden for years. She might not want to let anybody in, but the thought of losing her is unbearable. Passions flare as the threats intensify. Can Cole convince Eden to break her own rule to never fall in love…before the killer snuffs out their happily-ever-after?

Author Anna J. Stewart recently answered some questions about her book for The Big Thrill:

That the bonds of friendship, even when formed by tragedy and horror, can see you through the most difficult of times. Those same events can also shape people into someone different than who they might have been. Examining how children’s lives are affected by crime and violence is something we should be paying extra attention to, and helping them to funnel those feelings and emotions into positive action.

There’s an inherent desire in suspense readers, I think, to know that the bad guy will get caught and that (even if it’s not a romance) there will be a satisfactory conclusion. I know I always want a story where the good guy wins, especially if the odds are really stacked against him or her. I’m also a fan of the “team” effort, and that’s something I’ve worked hard to bring out in this series (this is the first in trilogy). I also worked to bring the characters’ weaknesses to the forefront, and make them have to face what a) they don’t want to and b) that acknowledging those flaws and weaknesses can ultimately help them to achieve their goals (ie: catch the killer).

Originally this was supposed to be one story triggered by the idea of a woman waking chained up in a meat locker. I had no idea until I got her out of that locker that, despite her single-minded determination and independence, that she’d have a close support system of her three best friends. This is not an easy character–she’s not particularly a nice person: she goes after what she wants and damn the consequences, so I knew whoever she surrounded herself with had to be equally strong and equally motivated.

The idea that their bond of friendship was forged by the murder of their friend when they were all nine years old was a major a-ha! moment. Three girls from three completely different types of families each found their own way of dealing with the (still unsolved) murder: Eden became a kind of vigilante, going after the bad guys, the law be damned. Simone became a prosecutor to put the bad guys behind bars, and Allie became a psychologist to get to the reasons why someone would commit the actions they do. Examining those three “coping mechanisms” really fascinated me and helped to develop very distinct heroines who, oddly enough, fit together.

The other thing I discovered is that I’m probably a bit more like Eden St. Claire than I’d like to admit.

This book also taught me that when writing suspense, minimal plotting is entirely necessary. I’m not normally a plotter as I’m afraid I’ll lose interest in the story if I already know what’s going to happen (or that I might inadvertently leave clues along the way), but this helped me find my process for writing romances with more mystery and suspense elements.

I think I alluded to it above. As much as this story is about the hunt for a serial killer as well as being a romance, it’s also a story about the bonds of friendship and the lengths three women will go to in order to help their “sisters.”

All of my stories always have a large community aspect and writing about this friendship was one of my more enjoyable projects. I’m going to miss these ladies when the trilogy ends.

First and foremost, Nora Roberts. She was the first romance author I ever read and the first book of hers I did read had suspense elements. She’s a born storyteller who creates indelible characters. Her JD Robb books are ones I go to when I get stuck or need to remind myself why I write what I write. Reading her books made me want to write them.

Second, Stephen King. Growing up in the 70’s, there were no young adult books to be found and I was a voracious reader (my mother never said no to me buying books). I read Carrie when I was 8 and was hooked. The Stand is still one of my favorite books of all times. Again, it’s all about the characters. He can create the most outlandish situations and plots, but the characters are what make it. Even with such a large cast.

Running a close third would be Dean Koontz (I can’t tell you how many times I’ve read The Watchers). He gets (once again) character, but also he’s a master of conflict, both internal and external.

Sherrilyn Kenyon, who is one of the best world builders in fiction out there. My first writing love is paranormal romance and urban fantasy, and she just hits all the marks.

Literary influences run from Jane Austen to Zora Neale Hurston, and for suspense, Phillip Margolin, John Sandford, and Allison Brennan as some of my go-tos.

“Anna J. Stewart’s page-turning debut is a pitch-perfect blend of romance and suspense. With a smart,engaging heroine and a sexy cop hero, what’s not to love? Fun and suspenseful, MORE THAN A LAWMAN rocks.”
~New York Times bestselling author Allison Brennan

USA Today and national bestselling author Anna J. Stewart can’t remember a time she didn’t have a book in her hands or a story in her head. A geek at heart, Anna writes romances featuring strong, independent heroines. RT Book reviews says Anna’s romances are “refreshingly unique, quietly humorous, and profoundly moving” and New York Times bestselling author Brenda Novak says, “The talented Anna J Stewart delivers every time!” Anna lives in Northern California where she deals with a serious Supernatural, Star Trek, and Sherlock addiction, and tolerates an overly affectionate cat named Snickers (or perhaps it’s Snickers who tolerates her.) When she’s not writing, you can usually find her at fan conventions or at her local movie theatre.