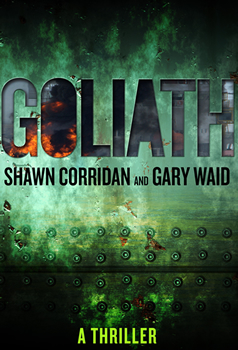 A ways back, and years after graduating from the University of Hawaii, Shawn Corridan won the FinalDraft Big Break Screenwriting Contest. So, he made the first of several foolish moves: he quit his day job. Then he moved from Honolulu to Los Angeles, because a Hollywood agent told him, “You have to be in it to win it.” Leaving Hawaii was mistake number two. Listening to the agent was his third mistake.

But as it happened, winning the contest got Shawn many meetings in Hollywood. So he wrote another script, GITMO, which got him even more meetings. And before he knew it he was on the SONY lot pitching a thriller he’d been noodling on, involving the world’s largest oil tanker, an impending storm, a maiden voyage, a dubious cargo, and a former-legend-but-now-disgraced salvage ship captain yearning for redemption.

Shawn left that meeting vowing to write the story some day. He fell in love while pitching it, making up plot points on the fly. He knew it was a winner, having all the elements of a great page turner. There was only one thing missing…

…Gary Waid. A boat guy and former marijuana smuggler who’d been in prison for eight years and had just been released.

Shawn called him. After all, Gary was the very guy he modeled the protagonist of his story after, a man that was “an amalgam of rivets, teak and diesel.” He’d known Gary for years. They grew up in the same small town in Florida, and graduated from the same high school, the only high school in their small town. Gary was an awesome sailor. And a good writer, a fact Shawn gleaned from reading some of the pieces Gary had written when he was released from prison.

That’s right: prison.  Because back in the day (70s and 80s) it was the Wild West in the Florida Straits. And boat captains were regularly approached by representatives of the burgeoning marijuana industry. One night while trawling for shrimp off Fort Jefferson, Gary caught a bale. Sea weed, they called it. A Square Grouper. Then he caught another bale. The seeds were sown. Soon he stepped onto his first pot boat, a decrepit steel hull, and he was launched into the smuggling business. They needed guys like him. He thought on his feet. Until they chained those same feet up later and put him in prison for smuggling nearly twenty tons of the stuff.

Anyway, a now free Gary Waid liked the story Shawn pitched to SONY. But he also liked GITMO—the script about smuggling and a doomed trip inside Guantanamo, Cuba—a place Shawn had actually been, towed there by the U.S .Coast Guard during an ill-fated marijuana smuggling run to Jamaica. One afternoon, over several beers, Gary told Shawn he thought GITMO would make a great novel.

“Then novelize it,” Shawn challenged.

And he did. Actually, they did. Together they turned the GITMO screenplay into GITMO the novel, a hilarious romp through the Florida Straits. In fact, the KIRKUS REVIEW said GITMO was “An exciting read that should appeal to fans of Carl Hiaasen, espionage thrillers and caper comedies.” And, as it turns out, GITMO will be published by Down and Out Books this fall.

Finishing GITMO lead to a “Now what?” moment. Gary and Shawn decided to tackle the SONY-pitched thriller on the high seas, naming it GOLIATH. They wrote it as a screenplay first and submitted it to UTA (United Talent Agency), who sent it out to Hollywood’s heaviest hitting action movie producers. Bruckheimer, di Bonaventura, and Michael DeLuca, to name a few. And they loved the story! But, due to production costs (shooting on the water), it was going to be expensive. “Too expensive,” they said, “unless it was based on a true story or adapted from a novel.”

So, once again, Shawn and Gary took a kick-ass screenplay and novelized it. And it turned out pretty damn great. Even Frederick Forsyth said so. As well as several other New York Times bestselling authors including Alan Jacobson, Allan Leverone, Brett Battles, Michael Dun and Thomas Waite. James Patterson has even auditioned them for his BookShots team.

Meanwhile, Shawn and Gary continue writing together, with three more books soon to debut, many more ideas in the hopper, and the idea of a GOLIATH sequel always in the forefront of their thinking.

Because, for this dynamic writing duo, nothing is off the table when it comes to danger in the skies, on the ground, or on the high seas. And while they’re always on the lookout for a cold beer or gin-clear water to surf or sail in, they’re still in search of that most rare and elusive of all creatures…

If you see one, let them know.

Shawn Corridan grew up in the shadow of Florida’s Cape Canaveral, his father a NASA engineer. He attended the University of Hawaii, where he could surf, play division 1 football, and learn to write. After graduation he traveled the globe, sailed the Caribbean, was part of an international smuggling ring, wrote market research reports for THE WALL STREET JOURNAL, and worked in pharmaceutical sales. Shawn has written several awarded screenplays. He lives in Merritt Island, Florida, with his wife Julie.

Born a navy brat in San Diego, Gary Waid has done almost everything there is to do on the water, from fishing to operating tugboats to repairing yachts. He has also been a roofer, a carpenter, a tractor-trailer driver, a writer for magazines–as well as a guest in the federal prison system. Gary lives on a sailboat in Florida with his wife Patty and their two dogs.