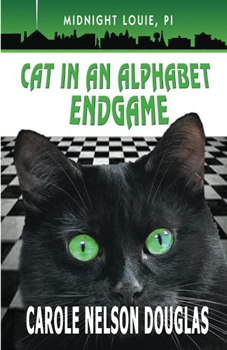 Meanwhile, a Strip-wide resurgence the long-vanquished Las Vegas mob could have Temple in search of an undertaker rather than a Justice of the Peace. Luckily, Midnight Louie and the Las Vegas Cat Pack are planning their finest moments to bring down the baddies. But no one can help Temple find which direction her wayward heart must go.

Author Carole Nelson Douglas took some time out of her busy schedule to speak with The Big Thrill:

It’s set in Vegas, baby, so expect closure, some fears, tears, and laughter. This is the last book in a 28-book series written like a three-year television series. It ties up all the continuing cold cases, crime arcs, and personal issues involving four human crime solvers: two men, two women: two pro, and two amateur detectives as they face their flaws and find their strengths throughout the series.

Midnight Louie is not a “cozy” cat, but patterned on a real stray survivor who inspired a woman to fly him home 1,800 miles to save him from death at the pound. Self-identified feline PI Midnight Louie’s colorful intermittent narrations (“an irresistible combination of Sam Spade and Nathan Detroit”) make him a sharp, savvy commentator on human foibles, and this 20-pound black alley cat has some action moves himself.

There’s a gritty thriller subplot involving IRA remnants and treasure and the ending grace note of Louie’s “roommate”, tenacious amateur detective Temple Barr, marrying one of two suitors, an ex-priest counselor, and a magician with a secret agenda. Before that, though, they must nail the jackhammer killer, so this series is “nice” and noir in more ways than one.

This book “wraps up” what’s been called “the epic cat mystery series” that combines elements of cozy and hard-boiled mystery and crime fiction, satire, and serious social issues. Las Vegas is the perfect nexus for a series that intentionally breaks genre rules, being both gritty and humorous, going from petite PR woman-amateur detective Temple Barr being brutally beaten by two thugs in the second book, to handling PR for a murder-ridden Elvis impersonator contest.

The major antagonist escaped the brutal Irish “asylums” for pregnant unwed girls, while the ex-priest character is tracking his abusive stepfather as he explores growing into a sexual life after the age of AIDS.

This Mostly Murder review by Virginia Knight says it all: “So in this typically fun-filled, witty and comic Midnight Louie outing, Douglas tackles a multitude of serious and topical issues [including] sexual addiction and obsession, monogamy, celibacy, sexual responsibility and familial responsibility versus sexual need and personal need, theology, stalking, sanity and lack of same, honor and commitment, romantic triangles and rectangles, sexual taboos, and the keeping of vows and trusts. No small accomplishment for a thoroughly-entertaining mystery with occasional chapters ‘written’ by an anthropomorphic tough-guy private-eye cat.”

I recently answered a Facebook post on this very topic, and it explains why it’s no big stretch for me to put a fantasy construct like Midnight Louie in a mystery series.

I love to and have written: contemporary and historical thriller and mystery, high and urban fantasy, action and adventure, and comedy of manners. I’m a character-driven writer, but love to world-build, so series allow me that freedom, and I like to blend genres, as I’ve always read all of them.

The Prime Suspect finds the series “everything you might want in a mystery: glitzy Las Vegas, real characters, suspense, a tough puzzle, and…on top of it all, a fine sense of humor and some illuminating social commentary.”

“If it’s murder, it must be Midnight Louie time! Carole Nelson Douglas’s cool dude feline detective pulls off some fancy footwork when he matches wits with a murderer…Written with stylish zest and irresistible panache, this clever tale operates on a multiplicity of levels.”
—Melinda Helfer, RT Book Reviews 4½ stars

Carole was the first woman author to write a Sherlockian spin-off series and the first to use a female protagonist, diva-detective Irene Alder, the only woman to outwit Holmes, debuting with the New York Times Notable Book of the Year, “Good Night, Mr. Holmes”.