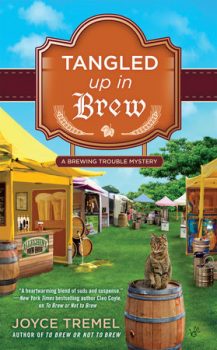 When I slip my writer hat off and slip on my reader one (which isn’t as often as I’d like) I enjoy losing myself in a cozy mystery. Give me a country house, or a village, or some other tight knit community with a murderer running loose and I’m a happy girl. So I’m delighted to be interviewing Joyce about her Brew series.

Is the Allegheny Brew House based on an actual brewery?

It’s a figment of my imagination. In the first book, To Brew or Not to Brew, Max buys a building in which to open her brewpub, that had been part of the old Steel City Brewing Co.—which is fictional, too! There really is an Iron City Brewing and I lifted a bit of their history and gave it to Steel City.

And is the brewing festival based on any festival you’ve been to?

Pittsburgh has a lot of festivals, but I don’t think we’ve ever had one with brews and burgers. We seem to keep the food festivals and the beer festivals separate. I’m not sure why.

I’m not either. In the UK we’d make sure the two were together.

What inspired you to start writing crime stories? Was it your career as a police secretary?

I’ve always liked to write. I was jotting down stories well before my part-time job as a police secretary. In seventh grade—this was back in about 1969? (I don’t do math—I’m a writer!)—we had to compose our autobiographies and extend them to the year 2000. I may have had the writing bug before that, but that’s the first example I can think of. It was a wonderful piece of fiction, by the way.

I loved the bit on your bio that you had, “more than once envisioned the demise of certain co-workers, but settled on writing as a way to keep out of jail.” My family accuses me of having a morbid mind because I try to devise foolproof murder methods. Is it the same with you?

Ha! Yeah. I think my husband sleeps with one eye open.

What did it feel like watching your first book, To Brew or not to Brew, leave the nest?

It was wonderful, strange, surprising, and terrifying all at the same time. You want everyone to like it, and you’re so afraid they won’t. I didn’t look at Amazon or Goodreads reviews for the longest time. I was pleasantly surprised when I finally did take a peek.

How did that change for the second in the series? Does it get easier or harder?

I know more what to expect this time around, but I’m still terrified no one will like the book!

With To Brew or Not to Brew, I had no idea—well, about anything at all. Everything was new to me—copy editing, page proofs, etc. I’d never gone through the publication process before. Now I know what to expect. I wish I’d understood more about the process and what happens when.

I’m pretty sure most of my female readers would say Jake—the chef/ex-hockey player, but I’d have to go with Candy. She’s the seventy year old bakery store owner who has quite an interesting background—which will be revealed in book 3, A Room with a Brew, due out in October. Like how I slipped that in there?

What is it about Jake that winds Maxine up the most and vice versa?

Hmm. Max gets upset when he’s overprotective. She has five older brothers and a dad who is a homicide detective, so she’s put up with overprotective males her entire life. She gets tired of it. Jake doesn’t like it when Max goes off on her own to investigate or question people without letting him know, which goes back to Max anticipating that overprotective thing. They’re both working on it. Jake is much less overprotective in TANGLED UP IN BREW than he was in To Brew or Not to Brew.

If you had no constraints of time and a guarantee of publication, what book would you write?

I’d like to write something set in the 1940s. It’s my favorite era—the clothes, the hairstyles, the lipstick, the music—it couldn’t be any better.

I have no idea! 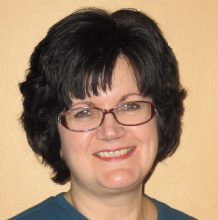 Joyce Tremel was a police secretary for ten years and more than once envisioned the demise of certain co-workers, but settled on writing as a way to keep herself out of jail. Her flash fiction has appeared in Mysterical-e, and her non-fiction has been published in the Pittsburgh Post-Gazette and the Pennsylvania Chiefs of Police magazine. Her debut novel, TO BREW OR NOT TO BREW has been nominated for a 2015 Reviewers’ Choice Award for best amateur sleuth by Romantic Times. The second book in the series TANGLED UP IN BREW, is scheduled for release October 4th, 2016.