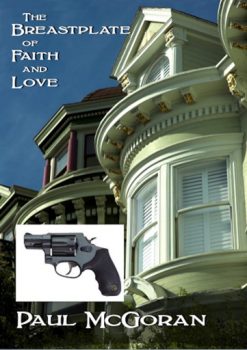 Paul McGoran’s chronicle of the elegant but toxic Chitworth clan continues in THE BREASTPLATE OF FAITH AND LOVE (New Pulp Press)—his follow-up to the 2015 noir thriller, Made for Murder. The action begins in old-money Newport, then shifts to a contrasting pair of upscale and hardscrabble neighborhoods in San Francisco.

While the new novel stands alone as a psychological thriller/murder mystery combo, it also marks the start of a series featuring P.I. Stafford Boyle, a small-time gumshoe from Rhode Island. His keynote is a kind of sophisticated naivety. He’s the kind of fellow who relates his clients and their cases to his favorite film noir plots and the actors who starred in them. He’s also a dogged sleuth.

Stymied at first by a job that has him chasing down a promiscuous reality-show winner and a missing fiancée, Boyle is refocused when the trail leads to Dismas Cottage, the gilded-age mansion of the wealthy Chitworths. Under a mandate from Ivan and Claudia Chitworth to conduct a ‘discrete’ investigation of their west coast relatives, a reluctant Boyle departs the cozy confines of Newport and flies to San Francisco where he confronts:

It’s a hell of a mess, but it’s all connected, and Boyle must figure out how. When the last piece of the puzzle locks into place, he’ll be forced to abandon his client and break the law to protect the life of an innocent child.

THE BREASTPLATE OF FAITH AND LOVE has a spooky sound to it. What does your title refer to?

In the novel, it’s the name of a storefront mission in San Francisco. Beyond that, it symbolizes the strength found in truth and forgiveness, something my cast of confused and volatile characters needs to contemplate. The phrase goes back to St. Paul in the New Testament.

Well, it’s not ‘spiritual’ in the way folks use the word today, but it’s grounded in a moral view of life. After all, crime is just sin redefined for a secular audience. Crime fiction deals with transgressions of the moral order, assigning blame, and meting out punishment—another way of describing justice.

Heavy thoughts. Noir has that knack of treating the consequences of crime as a downward, destructive arc. Does BREASTPLATE fit in the noir genre?

BREASTPLATE has three story arcs. One of them is noirish, but the novel as a whole is more P.I. murder mystery with a dollop of thriller elements. The main plot concerns an old scandal that continues to disgorge its secrets and threaten the powerful. Everything in the novel flows from that.

I settled on multiple POVs for BREASTPLATE, using a close third-person narration for the major characters. This method of telling a story pleases me, partly for selfish reasons—it lets me frolic inside the heads of several distinct personalities. The technique kept my interest in the story fresh, and I’m betting it will have the same effect on the reader.

A lot of authors begin with a working title for a novel before settling on the final version. Was THE BREASTPLATE OF FAITH AND LOVE your first and only choice?

Some editors want to have a say on title decisions as well. In my case, there was a working title—A Tale of Two. But somebody at a writers’ group pointed out that it sounded more like Dickens than Chandler. That made me step back and search the text for other possibilities. When I hit on the name of the storefront mission, I saw how it served as an anchor point in the story. Case closed, I had my title.

Just about everything in the plot of BREASTPLATE comes in twos. Two cities—Newport and San Francisco. East coast, West coast. Two sisters—one with an epic resentment. Two ex-cons—one looking for redemption, the other for a quick score. Two detectives—a flaky private eye and a straight-arrow police lieutenant. Two half-brothers—one almost certainly inclined toward evil. And two murders—one brutal, one the result of a perverse conspiracy.

What’s up next? I have to think another thriller is in the hopper.

Right you are. Next time out, Staff Boyle will return to his old hometown to investigate the revenge murder of Red Dalton, the bully who terrorized his childhood.

Do you have a title for it? How about a tagline?

The working title is Sooner or Later, Delicate Death. For now the tagline reads: ‘What lies behind the lies they tell in Wickenden?’ 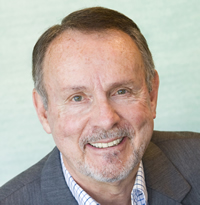 Before turning to crime fiction, Paul McGoran had a varied career as Navy linguist, marketing executive, management consultant and day trader. His first published novel was the pulp thriller, Made for Murder (New Pulp Press, 2015). He is also the author of a collection of short noir fiction, Paying for Pain. Paul writes fiction because it is most immersive activity he has ever known. His next novel will bring his P.I. protagonist back to his old hometown to solve the revenge murder of the bully who terrorized his childhood.