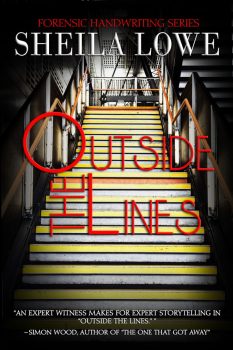 In the sixth book of the Forensic Handwriting mysteries, what should have been a routine afternoon on the witness stand for handwriting expert Claudia Rose turns into a shocking assault that leaves her traumatized. Then her getaway to the UK lands her in trouble with the FBI and New Scotland Yard—Detective Joel Jovanic’s homicide case has followed Claudia to London where she finds herself unexpectedly allied with the chief suspect.

I’m not a good traveler. More to the point, I’m a hermit who is happiest home alone behind my computer keyboard. But last year, when I learned that my younger son was getting married in Germany, of course I had to leave my hermitude and make the trip. Ben, who was a rock star, had met Tuba, a stunning (inside and out) Turkish-German woman and decided to settle down. Or, as he put it, “trade in his leather pants for a polo shirt.”

Coincidentally, I’d received an invitation to lecture two days after the wedding at a meeting of the British Institute of Graphologists. I’ve lived in the US for most of my life, but I’m British-born and consider England home (my many political posts on Facebook notwithstanding, I still carry a green card). I decided to set some of my book there and happily accepted. Thus, the wedding trip became a research trip, too (not to mention a tax write-off.)

Set in the ancient town of Bad Homburg, the wedding could not have been more perfect. Maybe it was the influence of the five-hundred year-old homes and the castle, but even my ex-husband and I got along for four whole days, a record. I’d flown to Germany with my older son, Erik, and his girlfriend. They stayed on, while I made the one-hour flight from Frankfurt to London—my very first solo trip overseas. This hermit was inordinately pleased with herself.

At Heathrow, I boarded the Express train to Paddington, where I discovered that the hotel room I had booked at the meeting venue was the size of a walk-in closet. The headboard and footboard of the twin bed touched each side wall and the bathroom could have worked in a cruise ship cabin (a small one.) But when I woke on Sunday morning in that tiny bed, childhood memories flooding over me, I couldn’t stop grinning and saying, “I’m in London!”

My lecture went as well as the wedding had (shouldn’t a mystery author run into all kinds of problems—you know—tension on every page?) The Institute board members went above and beyond to supply info I needed, and Chairman Adam Brand even squired me across London in a black cab, making sure I got on the right train. My longtime pal Janet put me up at her house and traipsed around the country with me so I could get things right. After all, YouTube can supply the sights and sounds of an unfamiliar locale, but it can’t give you the taste of bangers and mash, or the experience the damp London fog on your face. Being there really does make a difference and your readers will know it.

I had planned to set an important scene at Charing Cross Tube station until Janet ruined my day by pointing out why it wouldn’t work. As any author knows, publishing a book with even small factual errors can result in an avalanche of nastygrams posted on Amazon by readers who know better than the writer.

The scene, which (thank the writing gods) was easily fixable, was inspired by a 2005 atrocity that had personal implications. My cousin, a jeweler in London, was on his way to work in Hatton Garden. Leaving the Tube one stop early, he crossed the street to his friend’s clothing shop. He was in the loo when the whole area was rocked by a bomb blast—one of several deadly terrorist attacks that day. My cousin learned that another friend’s wife was on board the train he had just exited. She, along with dozens of others, did not make it out.

Another scene that had suggested itself on a previous lecture visit to the UK was set in Cambridge, where the Eagle pub (Est. 1667) has a room with some unusual artifacts. In WWII, using candles and cigarette lighters, US and RAF flyers burned their names and regiments into the ceiling of the aptly-named “American Room.” I was enjoying a Ploughman’s Lunch there when my companion excused himself for a few minutes. Being a suspense writer, I naturally thought, What if he never came back? What might have happened to him? The answers to those questions would never have made it into the book had I not actually sat in the American Room, soaking up the mise en scène.

So, that’s a little of the UK side of the book. Much of the L.A. story is told from the POV of Claudia’s fiancé, LAPD homicide detective Joel Jovanic. I’ve never been a cop, but I want Jovanic to be a real one, which means I have to know something about crime scene investigation. My work within the court system as a forensic handwriting expert is as close as I want to be to law enforcement, so the police procedure required consulting with experts. My conversations with retired detective Sergeant Derek Pacifico, and former FBI supervisor George Fong gave those sections the verisimilitude it needed.

My overseas trip came to a close with the tension that the first part had lacked, courtesy of a Lufthansa (I’ll never fly them again) pilot strike, which necessitated a switch to Screaming Baby Airlines. Back in Southern California and my hermitude, I knew that stepping out of my comfort zone had been well worth it, not only for the obvious reason of celebrating my son’s marriage, but also going the six thousand miles to get it right. From those efforts the book derives an authenticity that is nothing more than my readers deserve. 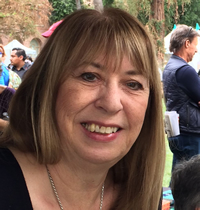 The mother of a tattoo artist and a rock star, Sheila Lowe lives in Southern California with Lexie the Very Bad (sometimes Evil) Cat, where she writes the award-winning Forensic Handwriting series. Like her fictional character Claudia Rose, she’s a real-life forensic handwriting expert who testifies in court cases. Sheila writes “medium boiled,” books (definitely not cozies) that she think of as psychological suspense. In other words, she puts ordinary people into extraordinary circumstances and makes them squirm.

Stop by and sign up for notices: www.claudiaroseseries.com or www.sheilalowe.com