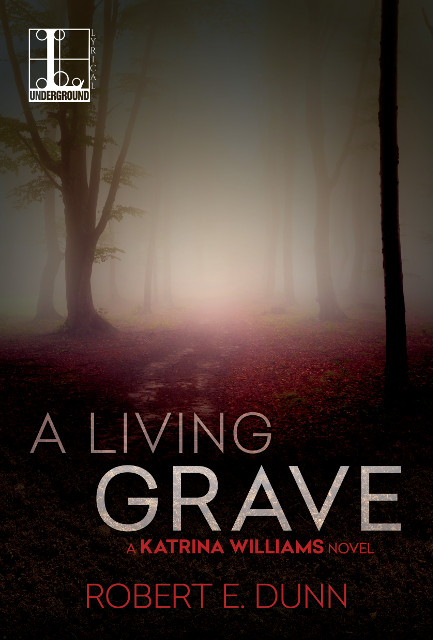 So why did he decide to put out a thriller now?

“I love horror but a diet of French fries, no matter how much you love them would become both boring and stifling,” Dunn said when we asked him about A LIVING GRAVE, the first book in his new Katrina Williams thriller series.

“I don’t see much difference between horror and thriller except the adversaries and the rules of the fictional world. In a thriller you have real world rules with adversaries who must operate how the world operates. Granted they may get shot once a week with no ill effects or know every secret thing from hotwiring a car to hacking computers that control world money markets in five minutes, but the things they do can mostly be done. In horror the rules are different. People may be able to transform into bloodthirsty animals or the dead walk around eating people.”

Dunn’s main character in A LIVING GRAVE is Katrina “Hurricane” Williams, a cop just hanging on to her job as a Sheriff’s Detective in the rural Ozarks – ten years after a horrible assault by fellow soldiers in Iraq left her emotionally damaged and disillusioned. While investigating the brutal murder of a teenaged girl, she learns that she is a suspect in a military investigation into her painful past.

“Even as she fights to clear her own name, Katrina begins falling for Solomon, a fellow veteran turned painter, who is keeping devastating secrets,” Dunn explained. “Spiraling and barely under control, she follows the murder case into a place of utter darkness that hides a figure who may or may not be real. At the same time, another murder leads to connections between mobsters, bikers, and Solomon.

“Dragged down by death, guilt, and uncontrolled anger, Katrina hits bottom. Forced to confront the demons that control her, she finally chooses to fight for a life worth living and a love she desperately needs. But she may be too late. In one long night of loss and violence, she pushes aside the secrets in hopes of saving Solomon from his own dangerous choices.”

Dunn said he came up with the idea for Katrina because he wanted to write a strong female character.

“I can’t claim that I had some lofty goal of creating a female hero or writing a feminist statement,” he said. “There is a very practical reason for writing a strong female character. She stands out in the manly crowd. Add to that the fact that most readers are women and almost no one is writing this kind of book for them. Put those two things together and Katrina “Hurricane” Williams is born. She is a veteran dealing with all the issues of any deployed soldier and the aftermath of being victimized by the men who were supposed to be her team.”

Dunn points out that A LIVING GRAVE is actually the second thriller he’s written…well, sort of. He did a “thriller” called Safe Words – under the penname of Drury Jamison – a few years ago that wound up becoming something different than he original envisioned.

“I was writing a mystery/thriller about a female cop that got drawn into the world of BDSM: Bondage, Dominance, Sadism and Masochism,” Dunn recalled. “The amazing thing was how little sex there was in the book. What was there was a good plot and a connection between the cop and the man who becomes her guide into a strange world. When I started submitting the manuscript, I ended up getting a lot of responses noting the romance. Finally, it was suggested that I submit Safe Words to a romance publisher. They loved it. But they asked me to make it much sexier. Those were some fun rewrites.” He said Safe Words wound up winning an award for best dark erotica. “Now that is a fun thing to brag about.”

Dunn doesn’t have a set writing routine that he follows – although sometimes he wishes he did.

“For a long time I worked by way of goals. Instead of writing 2000 words a day I set the goal at 14,000 words a week. That meant that I could miss a day and make it up with just a little extra through the week. That worked great for a while but seven days a week was tough. There are always things that need attending to so… these days I commit to a couple of hours editing on upcoming books in the morning and a minimum of 1000 words in the afternoon on the most pressing work in progress. Then there are the days I simply procrastinate or mow the lawn. A routine would be a good thing.”

Dunn is already working on the next Katrina Williams, which has a working title of A Quicksilver Memory.  Asked who could play Katrina in a movie, Dunn replied:

“Man, that is a fun question. I can see A LIVING GRAVE in two ways. One would be directed by Ridley Scott, a sharp knife that would cut deep. It would star Charlize Theron. She would dominate the screen as Katrina. The other movie would be something different. I can see it directed by Kathryn Bigelow. It would be grittier…then, the big change, would be casting. It would be amazing to see Gwendoline Christie as Katrina. Don’t know her? Think of the tall, amazon warrior woman, Brienne of Tarth in Game of Thrones and Captain Phasma in Star Wars: The Force Awakens. Sure she would have to master a boring, Midwestern accent but I’m sure she can handle that. Either one of those would be movies to burn up the screen.” 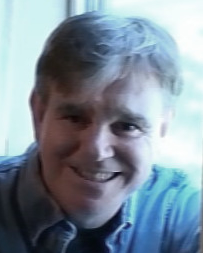 Robert E. Dunn is an award winning author with novels in diverse genres including, mystery/suspense, horror, and romance. A former writer and producer of corporate communications and television advertising, he has written scripts for or directed every kind of production from local 30-second television commercial spots to documentary productions and travelogues.