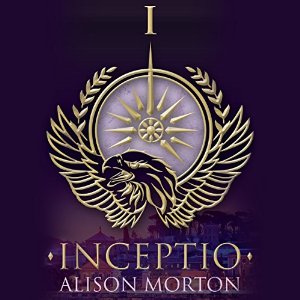 Founded sixteen centuries ago by Roman exiles and ruled by women, Roma Nova gives Karen safety and a ready-made family – at a price. But a shocking discovery about her new lover, the fascinating but arrogant Special Forces officer Conrad Tellus, who rescued her in America, isolates her.

Renschman reaches into her new home and nearly kills her. Recovering, she is desperate to find out why he is hunting her so viciously. Unable to rely on anybody else, she undergoes intensive training, develops fighting skills and becomes an undercover cop. But crazy with bitterness at his past failures, Renschman sets a trap for her, knowing she has no choice but to spring it….
©2013 Alison Morton (P)2016 Audible, Ltd

INCEPTIO is available from Audible and Audible UK.

“I loved it! Intriguing, unusual and thought-provoking. Karen develops from a girl anyone of us could know into one of the toughest heroines I’ve read for a while. Roma Nova was a world I really wanted to visit—and not just to meet Conrad—vivid and compelling. A pacey, suspenseful thriller with a truly dreadful villain, I can’t recommend INCEPTIO enough.” – Kate Johnson, author of The UnTied Kingdom

“Gripping. Alison Morton creates a fully realised world of what could have been. Breathtaking action, suspense, political intrigue… INCEPTIO is a tour de force!” – Russell Whitfield, author of Gladiatrix and Roma Victrix

“I finished Alison Morton’s Inceptio on Thursday, having enjoyed it very much – alternative world thriller with plenty of twists and turns. Excellent alternative thriller with plenty of page turning pace. I did enjoy it, at 5 star level. And different too and well produced. Looking forward to reading the next one now!” – Elizabeth Chadwick, author of the William Marshal series and recently The Summer Queen